ALTHOUGH MUCH OF Australia's early settler history centred around Sydney Harbour, the colony quickly expanded. One of the first areas to be developed was the town that became Windsor, north-west of Sydney. Initially difficult to get to over land, the fertile area was easily accessible by the Hawkesbury River.
Many of those early settler relics have disappeared under the weight of modern civilisation, but the discerning traveller cruising on the quieter back roads can still find a surprising amount of early Australian history, and even cross the river several times on the still-operating vehicle ferries.
That is exactly what I did when I borrowed a Crusader tandem-axle caravan from Windsor's Parravans Caravan World.

INSPIRED DESIGN
The Crusader Inspiration features a contemporary front bedroom and full-width rear bathroom layout, but with a difference in the middle (more on that later). With a body length of nearly 7m (23ft) and ATM of 2540kg, it does require a largish tow vehicle - my Toyota LandCruiser fit the bill.
The Inspiration is built on a DuraGal chassis with drawbar rails running right to the front suspension mounts. Greasable shackle load sharing suspension is fitted to the tandem axles. A pair of gas cylinders sits at the front, with a mounted spare wheel at the rear.
Above the chassis, the insulated timber frame is covered by aluminium cladding, along with tinted acrylic hopper windows and a triple-locking security door. Given their close proximity, the door and front nearside window can not be open at the same time.
For the al fresco lifestyle lovers, there is a picnic table and a slide-out barbecue under the rear window. Along with a 240V socket, 12V outlet and TV antenna connection, there are two discretely mounted (and easily missed) LED strip lights.
To keep all of the essentials, such as hoses, power leads and camping chairs, securely stored, there is a front boot and tunnel boot. So much storage might be a temptation to overload, so the ball weight should be kept mind.
The house battery and charger take up a little bit of space in the front boot. And while this compartment does have a light, the tunnel boot does not.

TIMBER LOOK
The interior's burnt orange hue may be somewhat conventional, but that is not to say it doesn't look good: it works very well with the rest of the interior. What isn't conventional, however, is the offside dining/lounge setup, which catches the eye as soon as you enter. Instead of a cafe-style dinette, there are two swivelling black leather lounge seats.
These "captain's chairs" look inviting, and with the tri-fold multi-use table between them, they proved a to be a terrific spot in which to relax. I did feel the need for footrests, though.
A group of overhead lockers sitting above the chairs comes complete with lead-lined windows, and a very welcome shelf sits under the window - good for books and the like when the folding table is, well, folded. A 175L three-way fridge, with cupboards above, sits between the rear seat and bathroom wall.
On the opposite side, the angled kitchen bench gives a bit more storage space underneath the stainless steel sink. Bench space isn't as plentiful as you might think, but the flush-fitting lid above the cooktop does help. There are a grill and oven under the cooktop, plus a microwave in the lockers above the sink.
General storage is very reasonable, with a good selection of cupboards and drawers, plus a wire basket slide-out pantry. Like the rest of the van, all the doors have piano hinges. Nice and secure.
The overhead locker above the rangehood houses the electrics, with the radio/CD player and the main 12V switch (a very useful item) on the outside and the 12V fuses within. While this is a nice change from the usual front boot location, circuit markings on the fuses would be helpful. 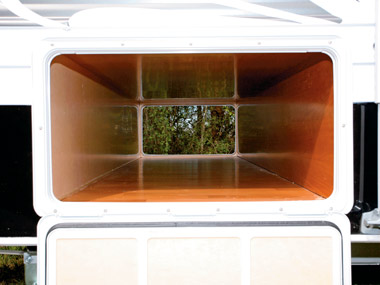 WASH ROOM
There are no surprises in the bathroom, with its nearside shower cubicle, offside Thetford cassette toilet, and a rear-wall vanity that includes a sink, mirror and cupboards all-round. These cupboards, however, are not as spacious as one might think - the door beside the sink hides a washing machine. The bathroom and shower cubicle are vented by a fan hatch.
Up front, an innerspring mattress measuring 1.85x1.52m (6ft 1in x 5ft) fills most of the bedroom. Windows on three sides and a mid-sized roof hatch give good light and ventilation. A shelf under the window adds to bedside storage.
Although there is the usual side wardrobes and overhead lockers, foot-of-bed corner cupboards are not included - a good idea in this case due to relatively limited space. In addition to adding some privacy, the small partition between the entry door and bedroom acts as a mounting point for the flatscreen TV.
THE BOTTOM LINE
One of the little surprises on this trip was to find myself driving down a Windsor back lane, almost through a cemetery for early settlers. I wondered what those same settlers would have thought of travelling around the country in what is essentially a totally weatherproof stagecoach, fitted with every modern convenience.
I reckon they might have been very impressed. And although the difference between a cafe-style dinette and captain's chairs might have escaped them, it seems like a winner to me.