Perth-based Coromal Caravans manufactures a wide range of caravans, pop-tops and camper trailers. It's newest addition to the line-up, though, is a budget range of vans called Elements.

Our review Elements, the 542 model, came from City Caravan Centre south of Brisbane, Qld. Dealer principal Mark Glencross was quite enthusiastic about the new Elements range. 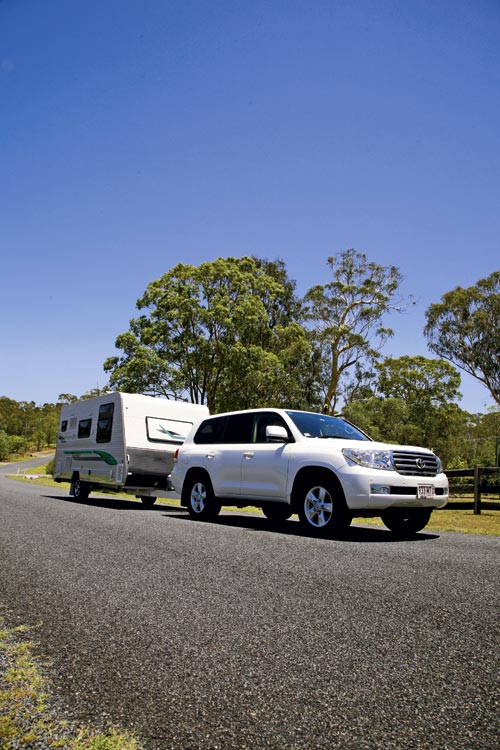 "I reckon the Elements range offers many of the Coromal features at a very affordable price," he said. "It's a good package for these challenging economic times."

I'm probably not the only one who thinks that some caravans have pretty odd names, but the 542 in this rig's moniker is quite relevant as it refers to the external length of 5.42m (17ft 9in) which, while not being overly long, offers reasonable flexibility with the layout.

Stepping in through the front entry door reveals the bedroom to the left (front), an L-shaped dinette on the nearside, a kitchen across the way and a bathroom at the rear. Coromal has resisted the temptation to change the standard 'timber' look, so the interior has vinyl-wrapped cabinetry, which doesn't look too bad with the light-coloured walls and ceiling.

All the drawers and overhead lockers have 'up and down' handles, which are great for people with arthritic fingers.

LED lights are installed throughout this entry-level van. Above the kitchen, a Four Seasons hatch allows fresh air to circulate while, a bit further forward, a Dometic air-conditioner can kick into gear when things get warmer. All the windows come with both full and net curtains, except the kitchen and bathroom windows, which have venetian blinds.

The kitchen is a busy place. Sitting side by side are the stainless steel sink and drainer, Smev four-burner cooktop/grill/oven and the 150L Dometic fridge with microwave above. That doesn't leave a great deal of room for bench space; in fact, the only bench space is the top of a cupboard at the bedroom end of the kitchen.

There is, however, a reasonable amount of general storage with three overhead lockers, one cupboard, two drawers - one big and one small - and two floor lockers.

In the forward locker is something normally found in the front boot - a 12V fusebox - and the hot water switch is on the outside of that same locker. The battery charger and other electrics are in the cupboard below and a radio/CD player is mounted on the panel that faces into the bedroom. These are not very common locations for these devices, but they are reasonably easy to access.

Opposite the kitchen, the L-shaped lounge works well in a van of this length, mainly because it's easy to get in and out of - even with the fixed table. Above the dinette are three lockers but only one reading light, while a wire-basket drawer at the end of the lounge creates easily-accessible under-seat storage.

In days of yore, you would never find a full-width bathroom in a van of this size, but times have changed and the Elements 542 has a relatively sizeable ensuite. A separate shower cubicle occupies the nearside corner while a Dometic cassette toilet occupies the other side. With two cupboards and a washbasin, the vanity cabinet takes up the rest of the rear wall and there is a large mirror above. Additional features include towel rails and rings, plus a wall-mounted cupboard in the only free corner.

Up front, the island bed with innerspring mattress measures 1.83x1.52m (6x5ft) and sits on a posture-slat bed base. Lifting the base reveals an open storage area with only the 100Ah battery occupying a nominal bit of space. It also gives access to the front tunnel boot, as do the lower doors on either side of the bed.

Behind the bed is an impressive spread of overhead lockers, side wardrobes and bedside shelves, rather than bedside cabinets. With this set-up, the entry door is almost in the bedroom and, while some caravanners won't like that, it wasn't too much of a problem for me.

From the outside, the 542 appears to be a traditional Coromal van. It comes with a DuraGal 100x50mm box section chassis and drawbar. The undercarriage has Coromal's Ezy Tow independent suspension - a setup that comes with leaf springs and a variant of a trailing arm setup, as well as 15in wheels. Mounted fore and aft of the axle are the 60L water tanks and both are protected by a sheet of aluminium cladding. Quick-drop corner stabilisers are fitted and the drawbar is a conventional affair with ball coupling, jockey wheel, handbrake and two gas cylinders.

Like all Coromal caravans, the Elements range is insulated, has aluminium cladding and an extruded aluminium frame to which the internal lining is bonded and riveted. There isn't a conventional front boot; instead, a good-sized tunnel boot with bin doors on both sides can be used for hoses, power cord and other essentials, such as golf clubs and fishing rods.

In the weight department, the 542 comes in well under 2000kg ATM, making it eminently suitable for towing by a wide range of tow vehicles. It certainly towed easily and with minimal fuss during our test.

The Coromal Elements range is very aptly named - the manufacturer has retained all the basic elements of its more expensive designs, with few compromises.

In addition, the weight has been kept well and truly down so that the van might be towed by whatever is already in the home garage.