I've long been a fan of Coromals. From their elegant interiors and distinctive cladding, to their solid build and thoughtful underpinnings, the marque certainly knows how to build a van. 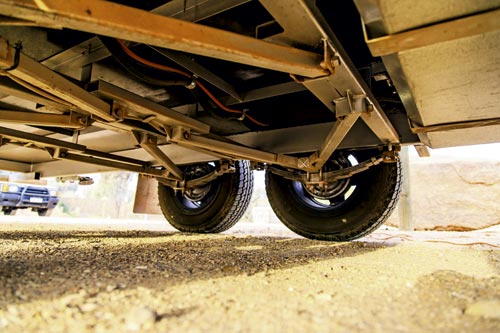 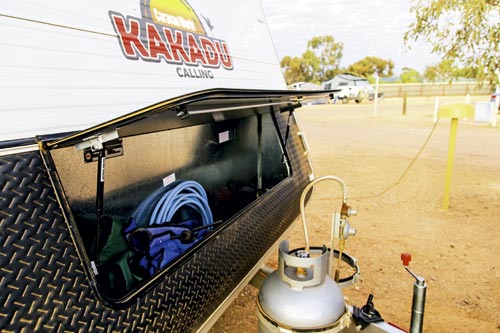 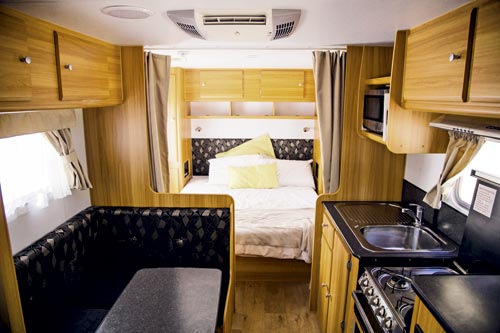 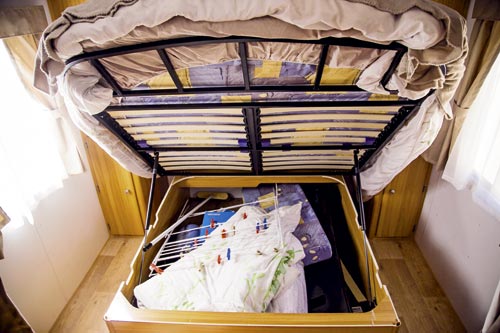 We had a big trip ahead of us - Melbourne to Kakadu and back, and many side trips along the way. I needed a van that I could have confidence in, one that would suit the towing specs of my Pajero tow vehicle and keep two adults and two children comfortable for a month on the road. It also needed some offroad cred.

The Coromal F616s with XC pack - a finalist in Caravan World's 2011 Legends Series - immediately came to mind. With an external body length of just over 6.1m (20ft) and weighing in at only 1860kg unladen (2450kg ATM), it was as though Coromal had tailor made the rig for my trip. But here's the best bit: one lucky reader will win this very caravan.

The forward bunks are one of this van's many highlights and, in a sense, make the F616s just as suitable for couples as it is for families. Let me explain. The upper bunk folds effortlessly against the forward wall and the mattress can then be folded in half to become a back rest for the lower bunk, creating a convenient day lounge. For our purposes, the upper bunk remained permanently made up, and the two adjacent storage cupboards, each with three shelves, was more than enough space to neatly store the kids' clothing. In fact, we had space left over.

Beneath the lower bunk is yet more storage space, though it's also where the 14L gas/electric Truma hot water service is stored. Take it from me: a hot water services that runs on 240V and gas is pretty much essential. At the tail end of the trip, two days away from home, our 9kg gas cylinder ran dry and I was loath to refill it when we were so close. But thanks to the Truma, my penny pinching wasn't at the expense of hot showers.

As for functionality, the bunks worked very well for our kids. Being the eldest, Ethan took the top bunk and, despite the fact there's no inbuilt ladder, had no trouble clambering up. Actually, he though it rather fun. We fitted a temporary guard rail to the lower bunk to keep one-year-old Jasmine safe at night. The only trouble came when she worked out how to operate the offside 12V reading light!

The nearside kitchen is small but, for a van of this length, that's to be expected. And with a little organisation, we had no difficulty whipping up decent meals. The four-burner Smev cooktop and griller performed well. The lack of an oven beneath the griller suited us as it meant more general storage was provided.

The Dometic AES fridge-freezer didn't miss a beat, effortlessly and automatically finding the best power source - gas, 240V or 12V. If you're out bush, just open the valve on the gas cylinder or plug into mains and the fridge will do the rest. The fridge's 150L volume proved to be the perfect size for our needs. In the cabinetry above the fridge, a 12V socket and antenna point is provided for a BYO television.

There's a decent amount of kitchen storage on offer, with a few overhead lockers (partitioned to prevent items crashing about when you're underway), a cutlery drawer, and an open space beneath the sink and stove. Opposite, there are two lockers above the dinette. Combined, we had enough space to keep our supplies neat and tidy (though the lid came off one container at some point, spilling flour everywhere!).

Speaking of the dinette, which sits between the bathroom cubicle and bedroom, I was sceptical that there'd be enough room for the four of us. But I was proven wrong the first night of the trip, when we sat down to plates of pasta in Kaniva, Vic, on the way to Port Augusta. Beneath, there's a reasonable amount of additional storage, but the offside area is taken up by the wheel arch, 12V Shurflo water pump and battery box (a battery isn't standard, but we've taken the liberty of fitting one).

The bathroom is made up of fibreglass panels, neatly put together to form a cubicle that's home to a variable-height shower rose and Dometic cassette toilet. A12V fan hatch is fitted above.

Storage space in the rear bedroom, which features a curtain for privacy, is more than adequate. The three lockers above the bed and wardrobes either side gave my wife and I no excuse to be messy with our things. The storage nooks either side of the bed in lieu of traditional bedside tables were very handy, but only the offside nook had a 240V powerpoint inside - it would be fantastic to see one fitted to the nearside nook as well. Stacey was forever asking me to plug her phone charger in. Alternatively, the foot-of-bed powerpoint above the offside cupboard (home to the Projecta battery charger) could be repositioned to the nearside. That way, both adults would have 240V power on their side of the bed.

The bed base lifts on gas struts to reveal a large storage space. That's where we kept our larger items - clothes horse, portable solar panel, etc. We would've been lost without this space.

In terms of climate control, Coromal has fitted Dometic's powerful 3000 Plus air-conditioner, a remote-controlled unit that cooled the van down in what seemed like seconds - in the dry heat of the Top End, we were grateful to both Coromal and Dometic for this good bit of gear.

There's no mistaking a Coromal - on the road, their polished grey cladding sets them apart from their white-clad brethren. While last year's F616s had a squared off, almost stark, appearance at the rear, the addition of a silver moulding along the top and a bumper with spare wheel, has nicely softened the appearance. Those alloy rims look great, too.

Storage-wise, the gal-lined front boot is yours to fill, thanks to the fact the Breaksafe, battery, fuses, etc., are inside and the 9kg gas cylinder is mounted to the drawbar. The drawbar itself is 6in SupaGal, with 6in main chassis members running the complete length of the van.

When a manufacturer fits a tap to the drawbar, I often lament that they've forgotten to fit a little guard to keep it safe from stones, etc., but in this case, Coromal has fitted the tap inside the drawbar where it's unlikely to be struck.

Beneath, I was pleased to see a minimum of vulnerable PVC piping (one of my personal bugbears). Coromal has fitted nice and high a single grey water pipe running from the shower to the
back of the van, with a piece of flexible black hosing from the sink connected
to the PVC amidships.

On Kakadu's rough-and-tumble tracks, Coromal's Esy-Tow independent leafspring suspension did a terrific job, absorbing the worst of it without complaint. I could've taken the van down the Oodnadatta Track or the Gibb River Road and it would've lived to tell the tale, thanks to the XC pack. The pack includes a swag of items for rough-road travel, such as 15in alloy wheels, upgraded offroad tyres, side checkerplate protection, galvanised steel water tank stoneguard, that Esy-Tow suspension (with 50mm stub axle and parallel bearings), Al-Ko offroad electric brake magnets and more. The XC pack will add $4100 to the base price, but it's worth every penny.

We did roughly 11,000km with the Coromal F616s and the little beauty didn't put a foot wrong. Winding through country Victoria, on the straight and narrow Stuart Highway, or tackling those red trails up north, this van is immensely capable under tow. With a weight distribution hitch fitted (the Pajero sunk a little too much in the rear when loaded up), the van wasn't fazed by road trains or cross winds. In fact, I can't recall a single occasions on that long trip when the van developed an unhealthy sway. Or any sway, for that matter. It was extremely sure-footed.

Whoever wins this van is in for a treat.
I LIKED

* The van's composure under tow

* Minimal use of PVC underneath

* A nearside 240V powerpoint in the bedroom.