Call me smug, but of the 70-odd caravans in our Port Douglas caravan park, ‘our’ Concept Ascot was the clear standout.

That’s not just a personal opinion, either. Comments from fellow vanners and constant requests for a peek inside confirmed as much, but the competition was pretty strong. After all, Port Douglas is where many of Victoria’s finest caravans migrate for winter.

We knew we would be the centre of attention from the moment we hooked up the 22ft 6in (internal length) Ascot to our brand new 2014 Jeep Grand Cherokee Overland at Melbourne Concept dealership Caravan Central. And it was clear that we were the subject of some CB chatter on the way up when a local tradie in his Navara informed us “that’s a top looking rig” when we refuelled on a rainy morning in Cobar. 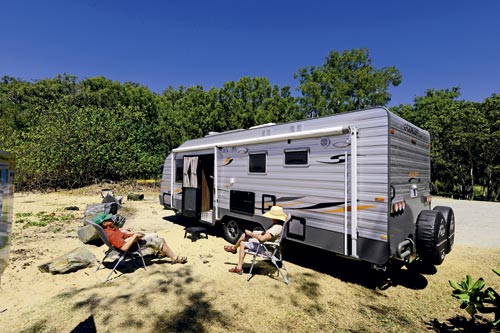 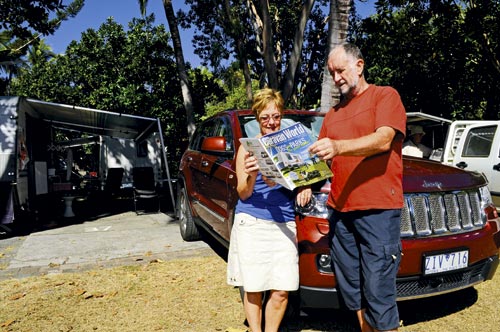 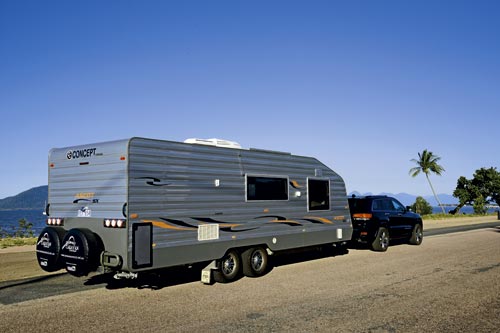 In a word, the Ascot looked stunning. Its optional and exclusive bright silver Camec ribbed aluminium cladding over grey composite lower sides behind the ‘brilliant black crystal pearl’ was a sight to behold. This was really no surprise, as the combined 15m, 5.5t rig had been carefully arranged over some months.

Having passed through the Daintree and Port Douglas on the way to Cape York in a Track Trailer Topaz hybrid caravan last year, my wife remarked how nice it would be to spend some quality time by the Coral Sea, instead of viewing it fast-forward through the side window. The prospect of a particularly chilly Melbourne winter made it an easy sell, as did the late-March arrival on the market of Concept’s new top-of-the-line Ascot SX caravan.

Concept liked the idea of showcasing its pinnacle caravan in this environment and built the SX to our specs, with the optional silver Camec cladding, the plush, pleated leather club lounge, instead of the generally more popular café-style dinette, and with the ‘Victoria’ chocolate-coloured, timber-look trim for its stylish solid timber, computer-cut curved and flat cupboards.

From the very first kilometre, the comb-ination of the Ascot SX and Jeep was a winner. The Ascot is a large caravan – more than 9m from ball hitch to twin bumper-mounted 15in alloy spare wheels. Perhaps it’s the contrasting darker lower panels and the eye-catching silver, but ours looked lower, longer and sleeker than other vans we encountered.

A lot of credit here goes to the Ascot’s distinctively wedge-shaped styling, which presented a relatively small face to the wind despite the low-riding stance of the Grand Cherokee, which has unitary body construction rather than the body sitting on top of a conventional 4WD chassis.

Our van had a nameplate Tare of 2738kg, but by the time the two tanks were full of good Melbourne water and we had packed a large table, four chairs, our tailored Tebbs awning walls, an awning mat, our indispensable Weber Mini Q barbecue and MAP capsule coffee machine, three dozen bottles of wine (we were going for nearly six weeks, after all!), clothes, another 20L of drinking water and our usual caravan and camping tools, we weighed in closer to 3.2t.

It all went in remarkably easily and the three-quarter front tunnel swallowed our large table and camping chairs, along with two smaller folding chairs and a folding aluminium table for roadside lunch stops.

The large offside rear locker could comfortably house a pair of jerry cans if required, while there was lots more exterior storage room for tools and caravan bits, like chocks, in the galvanised steel-lined front boot, alongside the Ascot’s dual 100Ah deep-cycle batteries.

Inside, it was more of the same and, despite being generous in our packing for nearly six weeks away, we had cupboards to spare. The only issue we faced concerned the wardrobe, located in the ensuite in our Ascot, above a drawer and the front-loading Dometic washing machine.

We would have preferred a larger, three-quarter length robe in a van as luxurious as this, but we found out we could have had a larger robe if we omitted either the drawer below the existing robe, or specified twin robes alongside the bed, rather than the bedside shelves fitted to our van. Next time…

Living in the Ascot was a breeze. The queen-size and supremely comfortable north-south island bed remained made and welcoming after a long day’s driving and Wendy’s pre-prepared vegetable soup and rich bolognese pasta sauce was ready by the time I had dropped the corner stays and tuned-in the TV antenna to local stations.

It was chilly at night initially, but the Ascot’s excellent insulation, with polystyrene foam in the walls and ceiling, combined with its Camec double-glazed windows, meant we didn’t need to call on the roof-mounted Dometic reverse-cycle air-conditioner for assistance. Nor did we for the rest of the trip when the temperature reached the high 20s during the day.

Once on site, we also really appreciated the Ascot’s interior layout. Space is luxury in itself, but the Ascot has lots of usable space, with no wasted areas, and this makes it feel even more luxurious.

The U-shaped club lounge was the perfect place for up to four adults to get out of the way while the meal was being prepared, while the bed was the ideal spot to relax and watch TV, leaving the rest of the van and the large rectangular dining table as a separate living, or in my case, working, zone.

The kitchen is not overly large, but there is plenty of usable bench and cupboard space and a very workable cooktop, griller and separate gas-fired oven below and a microwave above.

We really liked the built-in filter on the separate drinking water tap. Tea and coffee tasted just like it should.

This area, like the rest of the Ascot’s interior, is very well lit by four separate banks of LED lights. There are also some smaller ‘mood’ spotlights that emit a low blue light – useful for watching TV – but also work as strong reading lights if needed.

The two awning lights, however, are sometimes too bright and there is no way to simply select one, or to dim them, such as when dining or watching TV outside.

The rear ensuite is an excellent design. Visually and acoustically isolated from the rest of the van by a sliding wooden door that positions the toilet roll holder and towels on their rail just where you need them, the area houses the hang-up robe and front-loading washing machine on one side, a vanity unit with raised china bowl in front of a large make-up mirror with excellent lighting in the middle and the large separate fibreglass cubicle shower on the right and Thetford china bowl toilet alongside it.

Of course, living with anything (or anyone) for long enough leads you to think how things could be changed, so we drew up a short list for the Concept Ascot SX.

Although it was our initial choice, we found that the (chocolate) Victoria timber-finish interior made the van a little dark inside. The alternative lighter Kirsch wood finish would have brightened things up.

The full height pantry, next to the large Dometic 184L three-way fridge-freezer is a great idea, but the slide-out shelving only occupies the centre portion and there is a small amount of ‘wasted’ space.

Finally, two screws fell out on our way north – one from under the table and one from a cupboard hinge. But that’s the sort of thing you’d expect on a shakedown trip, and we actually believe it’s testament to the Ascot’s high quality construction and finish; other vans we have taken over similar distances have shed much more than just a couple of screws!