Whether you can live with the attention its polarising styling brings is one thing but, if you can, you will pass through the curtain into a very different caravan world.

Bailey might be Britain’s largest caravan maker but, being well aware of the changing demographics of today’s caravanners, it has its ear firmly to the ground in Australia. 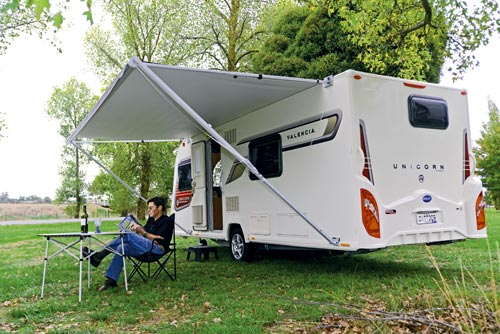 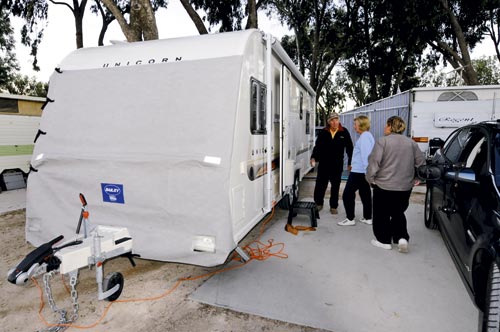 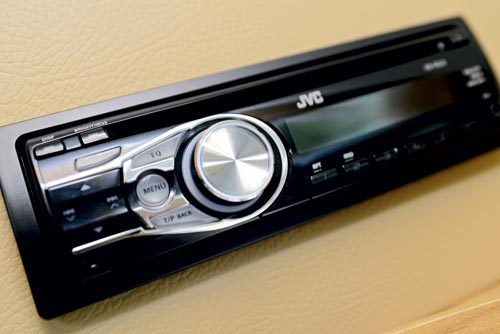 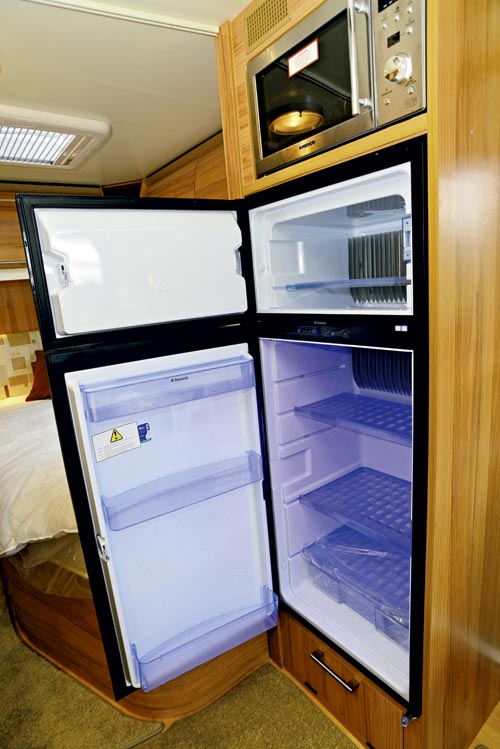 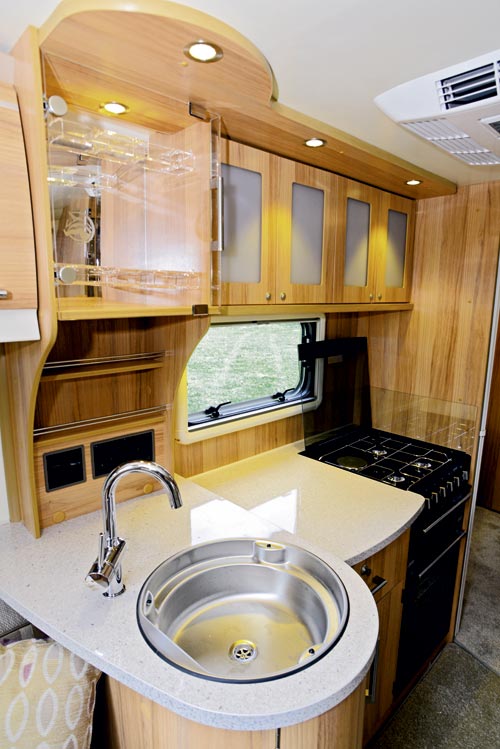 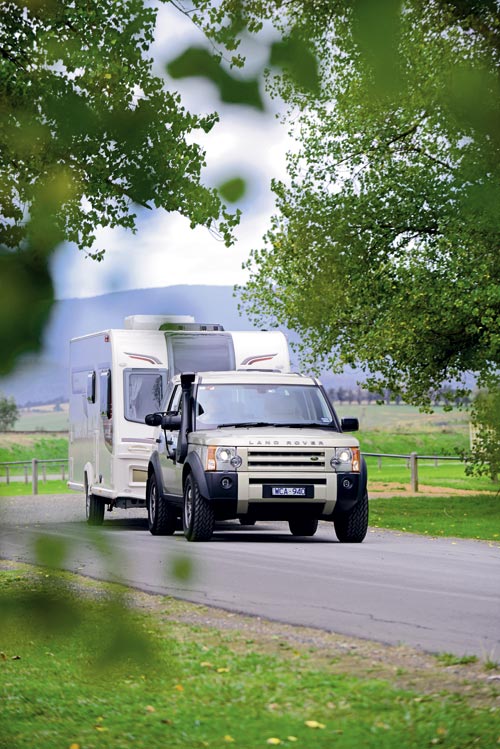 In the 18 months or so that Bailey Australia has been selling the Bristol-built caravans here, it has passed on the feedback of more than 250 owners, as well as writers like myself, on ways to make them more suitable for Australian conditions. Refreshingly, many of these constructive criticisms have been translated into improvements in the latest Series 2 Unicorn models that have just gone on sale.

The Valencia model we reviewed is the smallest, and only single-axle model, in the three-model 2013 Australian Unicorn S2 range, but, for several good reasons, it’s likely to be the most popular.

For a start, this caravan is a 5.7m (18ft 8in internal length) fully-featured caravan with a rear ensuite and all the bells and whistles, including central heating, reverse-cycle air-conditioning, that can be towed by just about any medium-sized vehicle. With a Tare of just 1560kg and a laden maximum weight of 1860kg, you can push it around like a box trailer and you’ll barely notice it. It made little impact on the fuel gauge behind my Land Rover Discovery.

This opens up the world of full-size luxury caravanning to a range of people who might otherwise be daunted by having to change their tow vehicle to travel in similar comfort and style.

As with all Baileys, the light weight comes from the company’s patented Alu-Tech construction, in which the 32mm-thick composite walls and roof, and the 44mm floor, are interlocked to an aluminium frame sitting on a large diameter fabricated and galvanised steel chassis to create a very rigid monocoque structure that carries a six-year bodyshell integrity guarantee.

Liberal use is made of the latest European Al-Ko products which, apart from the chassis, includes its independent suspension with telescopic shock absorbers, Al-Ko brakes and Al-Ko’s ATC Trailer Control System, which delivers the same anti-sway control as the company’s Electronic Stability Control launched last year in Australia, except that it relies on mechanical, rather than electronic, brake activation.

It all sounds great on paper, but after a 5000km shakedown last year, when we towed a large Unicorn Pamplona with a Commodore Sportwagon across the blacktop from Melbourne to Perth via Margaret River, we returned with a list of 15 suggestions for improvement.

The most impressive thing is that Bailey took them seriously and virtually all have been solved and incorporated as improvements in the latest S2 models. As I said, Bailey is really serious about Australia!

One of the issues I had with the Pamplona was its 65L main water tank, which is tiny for a full ensuite luxury van that might be used for free camping by many owners touring Australia. It’s now a respectable 100L.

Ground clearance was another issue with the previous 14in wheels, but this has been addressed by fitting larger 15in wheels and tyres and by relocating the spare wheel carrier up within the chassis rails, rather than below them.

The downside is that the plastic water tank now sits lower than the spare wheel and has no stone shielding, but Bailey Australia is well aware of this and the profile of the tank is currently being changed at the factory to ensure it sits higher.

Other improvements made on the S2 models to improve their ‘Aussie-ability’ are greater impact resistance and better insulated side and roof body panels, as well as up-rated axles.

Other changes based on Caravan World and customer feedback include the fitting of an external grab rail for safer entry and exit, a more ergonomic kitchen design with a two-stage bench height, an increased number of 240V and 12V power outlets, more robust fixing of wardrobe hanging rails, and improved internal flyscreens and window blinds to deal with Aussie mossies and our harsh sunlight.

Bailey has even added velcro under the 2.06x1.42m (6ft 9in x 4ft 8in) mattress because we complained that it kept sliding forward off its base when travelling, blocking access to the bedroom in the Pamplona! There’s a stylish new exterior grab handle on the outside next to the door that my wife requested, too. I call it the Wendy handle. Now that’s attention to detail!

All Baileys are also now pre-wired for solar power and satellite television and, if you are worried about the plush Mozart cloth upholstery fading or getting grubby, there is now a leatherette trim option available.

Viewed from the front, the latest Unicorn S2 models present a striking and appealing face, with the centre of the three opening front double-glazed windows extending up into the roof.

My first impression was that these windows and the flexible front GRP panelling were both very exposed to stone damage, and that the tall window might let a lot of heat in, but Bailey has an answer to both.

For a start, there’s a new, thicker-padded and more encompassing bra (see previous page) available as an option. And if there’s too much light, then the combination block-out/flyscreen blind incorporated into the window frame can be pulled down to reduce the centre window size to that of its two neighbours.

In any case, with each window surrounding the front lounge open in conjunction with the large fly-meshed polyplastic double-glazed skylight, there’s magnificent airflow throughout the van.

The van has no front boot, but in its place are three very large side lockers. The two at the front are almost as tall as they are deep. The third, towards the rear on the nearside, is wide and deep enough to hold items such as folding chairs and tables.

Another side locker holds the van’s deep-cycle battery, while on the offside there are two lockers: one for the toilette cassette, the other for the twin gas cylinders.

Step inside through the two-part door – sadly there’s no fly mesh secondary door – and the view of the spacious lounge room is impressive. There is comfortable sitting room here for six, and the curved overhead cupboard furniture and profusion of LED lights create a very special ambiance, particularly at night. Inexplicably, though, the table that pulls out from the central chest of drawers is only good for drinks for two.

To dine there, as you would surely want to, you need to open the side-hinged double bed on its telescopic struts, remove the folding indoor/outdoor table from its cradle above the large storage area and then unfold it in between the lounge seats. It’s a bit fiddly but, on the plus side, both couches convert into another double bed if you wish to sleep four inside the Valencia.

The kitchen is not particularly large, but there is good bench and cupboard space below, above and adjacent to the protruding circular sink with its large mixer tap and combination cooktop, oven and grill. Ample LED lighting makes this a bright and cheery place.

The large Dometic 190L fridge-freezer opposite holds all of your travelling supplies, but the microwave above might be too high for short users.

The fridge forms one side of an entrance into the master bedroom, which can be closed off from the rest of the Valencia via a concertina blind, and the layout sees a double bed against one wall, with a rounded corner on one side of the mattress to give you access to the other side, and the wardrobe on the opposing wall. It works well, and the picture windows and similar double-glazed hatch to the one up front are there to provide lots of airflow on hot nights.

Beyond and next to the bed is the door to the full rear ensuite that contains a separate swivelling cassette toilet, washbasin and shower cubicle with curved sliding screen. There’s even a heated towel rail – made possible by the Valencia’s built-in Alde central heating system, which is designed to allow sub-zero living in European snowfields.

While there’s no doubting the strength of Bailey’s 21st century Alu-Tech construction for Australian touring, we have reservations about the longevity of some of its plastic interior hardware over the long term, particularly if the van is taken off the bitumen.

That aside, the latest Bailey Unicorn Series 2 caravans are an interesting, well-priced and appealing alternative. Packed with features and offering real wow factor in their style and décor, they are light enough to be towed by almost any mid-sized car or light SUV. Indeed, the single-axle Valencia entry model that we tested will potentially open up the joys of caravanning to a whole new group of travellers.

One of the issues that many people have with European-style caravans is their vulnerability to damage under Australian touring aconditions. British and European roads simply do not have the loose gravel on their shoulders (and, hence, on the road) that we do, so stone chipping is not so much of an issue.

But as one of the features of the latest Bailey caravans is their light-filled and airy front lounge room that delivers a panoramic view through its large surrounding windows, the last thing you want to do is cover them when on site.

Bailey Australia offered an optional stone bra on the first series Unicorn vans (above), but, frankly, it wasn’t up to the job. During our test of the Pamplona, it had started to fray by the time we arrived in Port Augusta as part of our Nullarbor trip, and it was removed, in tatters, at Norseman.

However, the new Bailey bra available as an option (below) for the Unicorn S2 range is larger, much tougher and thicker, with 10mm of foam backing. It’s also easy to fit and remove, and at $850 plus GST, it’s a must for every owner.

Even if you choose to go ‘braless’, the flexible front nose panel, like the Unicorn’s tail panels, is cheaper to replace than to repaint, although I believe you will still get sand and shot-peening of those big front windows unless you keep them covered.