ONCE THE CORNERSTONE of the RV market, recent years have seen the family caravan take a backseat to layouts designed for grey nomads. This creates a potential problem for dealers who may not have the appropriate stock when families come strolling into their yard.
Of course, it's always possible to get a van custom built, but that doesn't always suit the family budget.
But there are still family vans around. And the A'van Jenna I recently tested is a very good example of a full caravan built for travelling families.
I picked up the Jenna from Caravan and RV Central in the western suburbs of Sydney, and headed across to the Blue Mountains. Instead of taking the Great Western Highway, I headed for the northern route along the Bells Line of Road, travelling through Kurrajong and Bilpin before returning through Katoomba.
The northern road is a considerably quieter drive. There are some very nice little towns and national parks to explore along the way, as well as the Zig Zag railway if you have the time.
SMOOTH ROLLER
With a body length of nearly 6.4m (21ft) and a Tare of 1880kg, the Jenna is eminently towable and does not require a beefy tow vehicle. Indeed, something like a Ford Falcon would easily do the job. My Toyota Prado was a few years old, but it coped without a problem. The Jenna is a smooth towing rig, indeed.
Like all A'van units, the Jenna has a hot-dipped galvanised chassis riding on tandem-axle leaf spring suspension. The chassis' punched-hole cross members give a good strength-to-weight ratio while at the same time allowing access for the electrics and plumbing.
Above the chassis, the body does not have a frame in the traditional sense. A sandwich panel wall construction is used, with an aluminium outer skin. Moulded fibreglass panels are employed fore and aft. The windows aren't the usual Seitz units; rather, Dutch-manufactured Polyplastic has been used.
For exterior activities, the Prostor awning keeps the sun and rain at bay, and a wall light and single 240V powerpoint provide illumination and power. The front boot houses nothing except empty space - the battery and associated electrics are inside the van.
EURO ZONE
On the inside, A'van uses what is known in the trade as the "Euro look": a light-hued timber with curved doors for the overhead lockers. It makes for a fairly pleasant look.
The Jenna's relatively simple layout sees the main bed across the front in an east-west configuration, kitchen bench along the offside, nearside dinette, rear offside corner bathroom cubicle and two bunk beds on the opposite side.
The van has no front window, and the two side windows are relatively small, which makes the bedroom feel smaller than it really is. That said, I should point out that there isn't a shortage of natural light - the big marine hatch above the bed lets in plenty of light and fresh air.
An L-shaped lounge is used for the dinette. Although this is a four-berth van, the fourth person is going to need an extra seat, otherwise it's going to be squashy.
Three overhead lockers, plus two shelves in a very handy position close to the door, sit above the dinette. A'van's simple electrics panel - 12V switch, battery and water gauge LED monitors - sits under the lower shelf.
The kitchen, which features a Swift four-burner cooktop/grill alongside a stainless steel sink/drainer, is surprisingly compact for a family van. Cooking dinner for four might require a bit more bench space. The 175L two-door fridge, however, is the right size for families, but it therefore takes up a good deal of space.
General storage consists of three overhead lockers, two cupboards (one with two drawers) and a large drawer for pots and pans. Halogen downlights illuminate the bench quite well.
BEDDING DOWN
In a van designed for a family, the sleeping arrangements are a key design feature. Up front, the main bed measures 1.88x1.35m (6ft 2in x 4ft 5in) and has its head against the offside wall. The person on the outside of the bed gets a bedside cabinet, but the inner sleeper gets a small front wall shelf and foot-of-bed cabinet. Although the bed adjoins the front wall, the inner sleeper does not have to climb over their partner to get out of bed, thanks to a walkway along the nearside.
Much of the under-bed storage is taken up by the house battery, charger, water pump and plumbing. This is also where the 12V fuses are located. The free storage space is therefore a little hard to get at, but a handy offside external door helps.
Two bunks, measuring 1.79x0.76m (5ft 10in x 2ft 6in) should accommodate the junior family members quite well. Each sleeper gets a window and an LED reading light. A floor hatch gives access to the storage under the lower bunk, and a full wardrobe with hanging space, shelves and four drawers sits between the bathroom and the bunks.
The bathroom features a flexible-hose shower, bench-style cassette toilet and a clever little moulding that contains a fold-down sink, small shelf and a shaving cabinet.
Given it's a wet environment, the bathroom doesn't have a powerpoint for the likes of a hair dryer and electric, but there is one on the outside wall, a little awkwardly located on the 'wrong' side of the door when it's opened.
THE BOTTOM LINE
There is no denying that family caravanning isn't particularly cheap, but in the Jenna, A'van offers a van that will accommodate two adults and two children, and can be towed by a family sedan - rather than a large fuel-guzzling 4WD - so there mightn't be a need to splash out on a new vehicle.
Of course, the family might have to travel reasonably lightly (though its 400kg payload is the RVMAA recommendation for a tandem-axle van), but in these days of taking everything but the kitchen sink along for the ride, that isn't necessarily a bad thing.
Source: Caravan World Jul 2011. 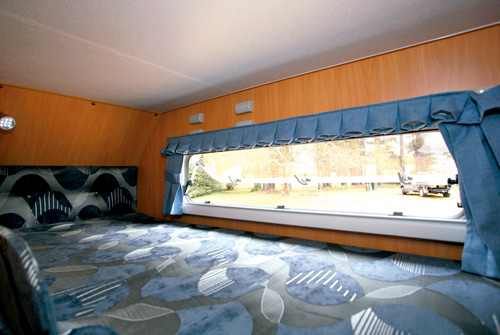 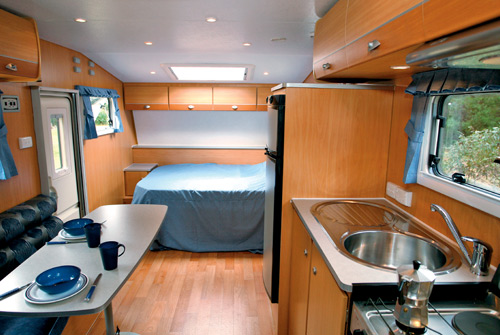 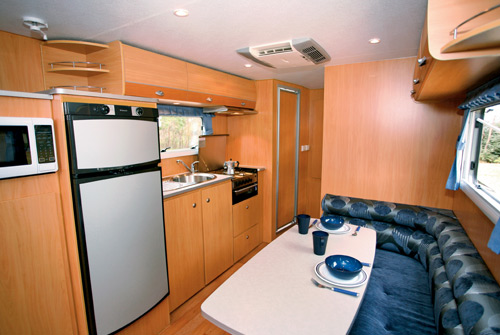 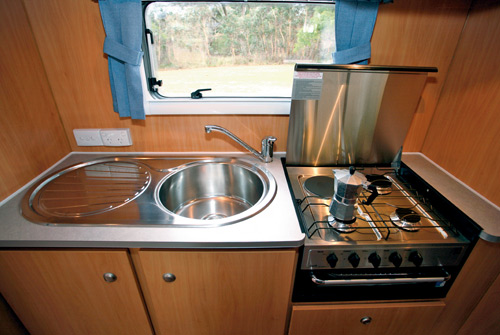 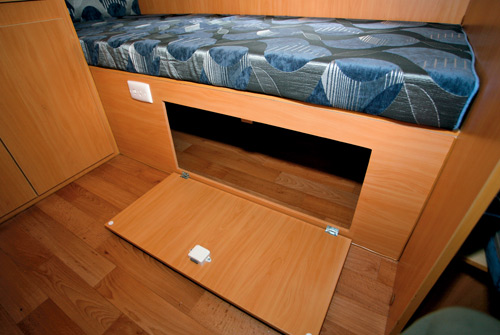