IN ANY INDUSTRY, there is always a risk of things becoming a little stale, especially when all is going well. It's all too easy to sit back and think that if what you have is working, there is no need to change it. And caravanning is no different.
But even seemingly small changes can make all the difference, and it often takes a fresh set of eyes to make those changes.
For Vic-based manufacturer Aussie Wide, those fresh eyes came in the form of new owner John Lewis, who took over the business in April 2011 after many years owning his own plumbing company.
Change was the name of the game when John took over at Aussie Wide, which he felt had fallen into the stale trap.
"It's been night and day in terms of the changes we've made," he said. "There is always room to improve.
One of the most immediately noticeable features John implemented was gold-coloured checkerplating around the 7.47m (24ft 6in) Bunderra van. It may not seem a huge change, but it's one of those little variations that customers are often drawn to.
"We have had a positive reaction so far," John said. "We had really good sales from the Melbourne Leisurefest. No one else had anything like the gold."
To the well-travelled eyes of Caravan World, the gold is a most welcome change from the usual silver, or black, giving a certain air of sophistication, even opulence, which you often don't get on the outside of a van.

TOUGH QUALITY
There is a lot more to like on the outside of the Bunderra. Not an offroad van as such, the rig is still able to handle some uneven terrain.
"It's more of a rough-road van," John explained. "You probably wouldn't take it on the Gibb River Road, for example."
The meranti frame, sitting atop a 6in DuraGal chassis and Simplicity independent suspension, is covered in alumiunium cladding. With chunky tyres, 16in alloys, rear bumper with a spare and two jerry can holders, and a well-protected under-body, the Bunderra definitely looks like it could handle some of those rough roads John mentions.
Up front, the A-frame also gives a feeling of strength. It's home to a pair of 9kg gas cylinders, a checkerplate-protected tap and a solid mesh stone guard, which also works as extra storage space. The large front boot is home to the van's battery chargers, inverter and Break Safe unit, as well as a full tool kit, which comes as standard. Another nice little touch of John's.
There is a dedicated bin for batteries on the front offside, and there are also two extra storage units at the offside rear.
In addition to its quality build, the van's exterior is home to lots of features to make life outside a pleasure. A huge Dometic awning pulls out to cover the (optional) slide-out barbecue, fold-down picnic table, two speakers, 12V and 240V powerpoints and a pair of LEDs.
There are also a couple of nice little features at the mid-entry. The first is a fairly standard pull-out step, but the other is the full-height door, which presents a real ease of entry for the taller RVers out there.
And as you would expect given John's history of owning a plumbing company - one that supplied caravan waterworks, no less - the plumbing on all Aussie Wide vans is top notch.

ROOM TO MOVE
Upon entry, the front bedroom offers a large and airy space with lots of storage and space to walk around. The queen innerspring bed has side tables with drawers and small lockers, plus a single powerpoint on both sides. There is also a pair of overhead lockers, two extremely deep hanging wardrobes on either side, and a corner foot-of-bed cupboard on either side. Pulling up the bed reveals more storage, this time compartmentalised.
Large windows on either side, as well as a front window and large hatch above the bed provide more than enough light and airflow. A pair of overhead speakers means sleepers can listen to their music in bed, but with the TV on an arm in the kitchen, watching a movie late at night might be somewhat awkward.
In the middle of the van, the large club lounge will comfortably seat four adults, with room for five if necessary. The large lounge is matched with a very generous table, and there are two more speakers mounted in the ceiling. This is a good space for those who like to entertain in their van.
There is plenty of under-seat storage, accessible via drawers on either side and by lifting the cushions, and four lockers overhead. 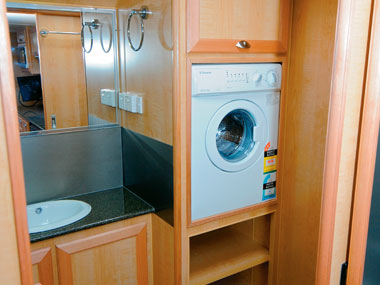 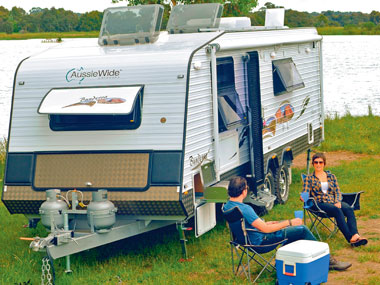 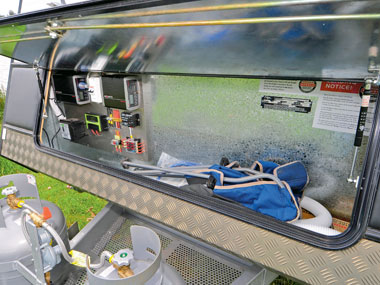 FLUSH WITH SPACE
One of the things that bothers me in caravan kitchens is when covers on the bench don't sit flush. For the travelling chef, there are few things more irritating than not being able to easily slide plates, bowls, etc., around the bench when preparing food.
Well, no such problems in the Bunderra's nearside kitchen. While you wouldn't call preparation space huge, it is very good, and the cover on the cooktop sits nice and flush, making for a comfortable environment.
All bases are covered here, with a four-burner cooktop/griller/oven, stainless steel rangehood, large sink with drainer, and a microwave at an accessible height. A generous 186L fridge sits on the offside, with a small Waeco wine cooler near floor level.
This is another part of the van where storage is impressive. There is a massive array of lockers and cupboards above and below, with enough room for all the victuals and utensils you can carry.
One complaint, however, is that some of the drawers and lockers could use a little more work with the sandpaper. They are fine on the outside, but once opened there was some rough and splintery wood.
But a real bonus, especially for those who like to stay on the road for a long time, is the slide-out ironing board hidden under the kitchen bench. This very nifty number is stowed near the entry door and extends to rest on the dinette table. You don't see too many of these.
Down the back, the ensuite is another large space, again with lots of storage. The nearside Thetford cassette toilet sits opposite the big shower cubicle, which has a light and fan hatch. There is another fan hatch above the toilet.
Somewhat surprisingly, bench space around the vanity is a bit limited. Storage, however, is not. Aussie Wide has made excellent use of the usually empty wall space to the left of the sink, where they have included a deep shelved cupboard. To the right, there is a small front-loading washing machine, with three deep drawers underneath and a locker above.

THE BOTTOM LINE
With a Tare of 2790kg, the Bunderra is not a small van, so a large-ish tow vehicle is required. But that can be said about so many vans these days, it really shouldn't be a turn off. For anyone looking for a rough-road van for some extended travel, the Bunderra would be a great choice.
And according to John Lewis, customers looking at Aussie Wide vans can expect a high level of quality from a smaller manufacturer that takes the time to carefully build its vans.
"We are building about one and a half vans a week at the moment, and we hope to be up to three by the end of 2012, which is enough," he said.
"Any more than that and you start having warranty issues, which we always want to avoid."
Having taken a good look over this Aussie Wide van, I can see exactly what he is talking about.