IT'S A FACT that much of the caravan manufacturing industry in Australia is based in Vic. That has a lot to do with history and material suppliers rather than anything else. It’s also a matter of fact that quite a few smaller specialised suppliers are based in south-east Qld. That has more do with a combination of the price of real estate for factories and, as anyone who comes from the northern state will tell you, the great climate for caravanning.

One of these boutique manufacturers, Sunland Caravans, is based almost halfway between Brisbane and the Sunshine Coast and produces the on-road (aka black top) van the Emerald. Most of its vans, however, are pitched at the offroad and dirt road caravanning fraternity. Our review caravan, the Blue Heeler, fits squarely in the latter category and is designed for Australia’s rough roads, while keeping the occupants in a style to which they are accustomed, of course.

Roy Wyss, proprietor of Sunland Caravans, is very passionate about the vans he produces. The Blue Heeler is no exception, having received some considerable attention to detail, not only on the factory floor but out in the back blocks of outback Australia, where the original Blue Heeler was put through some extensive testing paces.

Speaking of attention to detail, we should mention that the Blue Heeler, along with other Sunland caravans, has a table that can be used outside. We’ll get to this later, though.

TOUGH STUFF
The Blue Heeler is built on a very solid basis – a hot dipped galvanised chassis that is made from 4in x 2in RHS steel in a tandem rail arrangement.

Galvanised sheeting is used to protect the floor above and a look underneath the van reveals a very clean looking structure. Cruisemaster independent load sharing suspension with leaf springs, shock absorbers and trailing arms is used for the tandem axles and three 70L polyurethane water tanks are fitted between the chassis rails above and forward of the axles. While still under the chassis, we should mention the couple of well placed towing hooks located at the rear of the van – useful, we know, should the van have to be dragged out backwards from an awkward situation.

Above the chassis, the Blue Heeler is built with a timber frame, insulation in the walls, aluminium cladding and a lower waist of aluminium checkerplate. Many offroad vans have a ‘boofy’ look about them, and this one is no exception. The lower rear has been cut back to avoid scrapes in deep gullies and the bumper bar sports two spare wheels.

At the front, the business-like air continues with a mesh stoneguard, two jerry can holders (made from alloy checkerplate to give better protection to poly containers), a Hyland 3500 hitch, a mains pressure tap complete with stoneguard, and two front boots and a pole carrier. The upper boot can be used for general storage and the lower has two 100Ah gel cell batteries fitted in. Above the top boot is the pole/fishing rod carrier. There’s an additional storage bin at the front offside, which could be used for a generator – the matching one on the nearside contains two 4.5kg gas cylinders.

Along the offside, lockable water caps are fitted to the three water tank fillers – something many who travel in the outback find reassuring. One of the tanks is purely for filtered drinking water.

The tinted Galaxy windows give a view to the outside world; they’re all hoppers except for the slider beside the Camec security door.

Being in the outside world means sitting under the A & E awning, of course, while listening to music from the outside speakers and sitting around the dinette, which can be used outside when fitted with tripod legs.

MODERN LIVING
A layout that seems to have become almost de rigueur of late is that of a front bedroom, rear bathroom with cooking and dining the middle. Well, I can write that this one is a little different. It’s a front entry with a rear bedroom, nearside dinette, a kitchen across the front and offside walls with bathroom in the front offside corner.

However, more in keeping with current trends is the timber look with brushed stainless laminates. All the windows have net and full curtains, and there’s a large wall clock, a feature I quite liked.

Retired travellers might not be so much interested in the time but the “where are we, it must be Tuesday” digital calendar is useful.
In any RV, the kitchen is king, at least I think so. Up front, the bench has a Spinflo four-burner cooktop/grill alongside a stainless steel sink/drainer. Given the adjoining bathroom, benchtop area isn’t huge, but storage is better, with two drawers, two cupboards, a small slide-out pantry, one overhead locker and one floor locker.

On the other side of the bathroom, the cabinet alongside the 186L Dometic fridge offers shelf area and drawer/cupboard space as well. In the space above, there are two overhead lockers, one of which contains the 240V circuit breaker, main switches and hot water control. The other has the Winegard antenna connection for the flatscreen TV mounted below. Above the fridge is the all-essential microwave.

Opposite the fridge is the L-shaped dinette, complete with contoured foam cushions and a (removable) single pole table. Under-seat storage (partly occupied by the wheel arch) is accessed by floor lockers at both ends of the seat and there are the usual overhead lockers above.

BATHROOM ESSENTIALS
A Thetford bench cassette toilet, variable height shower and corner wash basin comprise the main facilities in the bathroom. Ventilation is supplied by both a ceiling hatch and a small window. Although not a full-width bathroom, it’s a good compromise for an offroad van where both length and weight are factors to consider.

A 6ft 1in x 5ft (1.8m x 1.5m) island bed takes pride of place in the rear of the caravan. With windows all round and a Four Seasons hatch above, it has plenty of light and flow-through ventilation. Included in the usual bedhead features is an AM/FM radio/DVD player, together with speakers.

Lighting in the Blue Heeler consists of very energy efficient LED reading lights plus fluorescents on the ceiling and in the
kitchen. That’s definitely good for a van designed for travel in the outback. There’s a 15A three-stage 240V charger for the batteries, although solar panels would be needed for total self-sufficiency, or a generator if you need the air-conditioner.

THE BOTTOM LINE
There’s no doubt that the Blue Heeler is designed for the rough stuff. Not only is it a good looking van but, with features like an unobstructed under-chassis area, it has been designed for practical purposes as well. As mentioned earlier, it’s also been built with a number of creature comforts on board and certainly for extended travel throughout Australia. 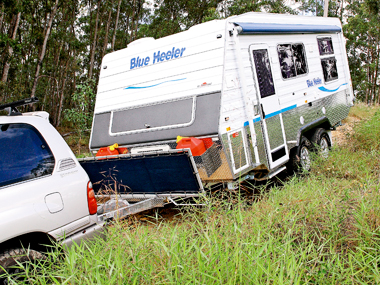 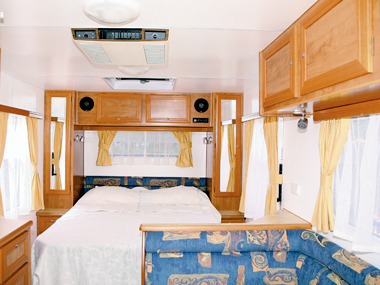 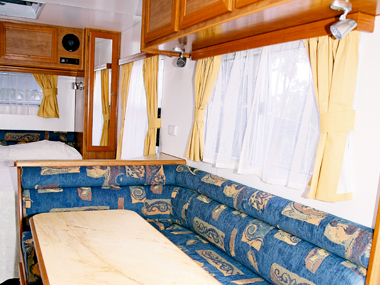