Best places for fishing in spring

By the time you read this, winter has finally come to its icy end for 2017. Spring brings new joy, new beginnings and new life with an array of opportunities for recreational fishermen. Caravanning nomads will slowly start their southward return to the homelands that have endured one of the coldest winters in memory.

Spring is usually associated with high wind events and often rough seas. This is the time that my hometown of Melbourne associates closely with the phrase ‘four seasons in a day.’ If not in a day, then certainly within a week! The cold, chill and strong winds can continue all the way until summer with some icy Antarctic blasts right through our November snapper run. 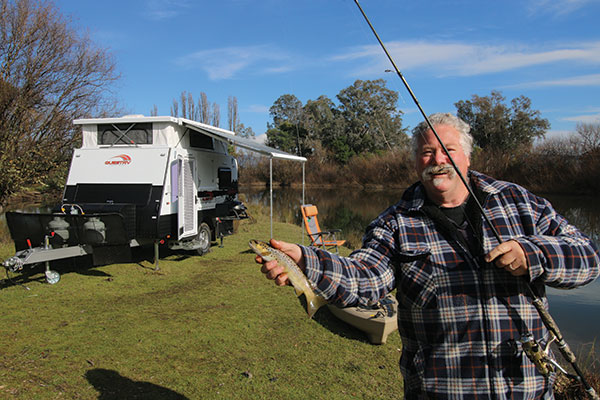 FISHING SEASON IN THE SOUTH

August/September hails the beginning of trout season in Victoria and Tasmania followed in October in NSW. This is an ideal time to match your skills with these wily speckled freshwater temptations and at the time of writing the fish are going off in the frigid lakes and rivers of Tasmania.  Fly flickers are busy tying their imitations to cast into the fertile waters sprung of the snow runoff. The new season brings increasing insect hatches and keen fly flickers will ‘match the hatch’ for greater success. Unless there has been a major rain event (which is likely), the high country rivers and headwaters are a terrific place to find the trout, especially by wading through the shallow sections. This is where the fish wait in ambush for a feed to float by.

September/October is a little dismal for southern saltwater fishos, but there’s still the ever reliable salmon, squid and gummies, if you can battle the big freeze waiting for the snapper onslaught in November. The beaches often perform very well for surf fishermen and those with boats are often surprised by some larger winter snapper. Whiting can be smallish and hard to find but are generally located in similar territory as calamari. It’s a great time to stock up on bait, and the squid serve multiple purposes. While many eat the entire fish including the head and tentacles, I prefer to eat the body and save the heads to use as early season snapper baits. In our bays, keen fishos can have plenty of fun on pinky snapper, and often encounter huge schools of salmon and bait fish.

The estuaries can be a marvellous option during spring, as black bream move in for their spawning runs. They can be a little frustrating as they can regularly change their diet, and often seem to have ‘soft mouths’, preferring shelled baits rather than solid crustaceans. Mulloway are a prime target during this period, especially high into the estuary systems or hunting the river mouths chasing small mullet and other bait fish.

Luderick are a year round species in most of the southern two thirds of the country, yet they remain the realm of a blessed few. Luderick live in the coastal currents along rock ledges in open waters and lower estuaries. Learning the methods to target these tough little battlers will ignite a passion forever. They are accessible to travelling land based fishos, particularly using floats and small hooks baited with lettuce or cabbage weed.

The natives generally aren’t too restless during the cooler months with closures on the Murray cod season for New South Wales, Queensland, Victoria and the ACT all falling from September 1 to November 30. Redfin are sluggish but join yellowbelly as possible freshwater targets. Yet, spring heralds the start of the Bass season. These wonderful little battlers are prime targets particularly for lure fishos looking to flick a spinner or hardbody around upstream. Getting lures tight into the Bass haunts can be difficult when you’re land based, so small roof toppers and kayaks will greatly improve your success.

Bass fishos will often encounter estuary perch around similar structure and method. They generally move down the estuary systems to spawn in winter and back upstream in spring and summer. It’s not too late to cast floating hard body lures, or even soft plastics to the lower estuaries, especially around the full moon period where you can find some explosive action in the shallows.

Offshore, the big pelagics have slowed. There are still southern bluefin tuna right through the south western districts and Tasmania’s south east coast, but they will become sparse. The mystery of the broadbill swordfish effort seems to have slowed toward the end of winter.

FISHING IN THE NORTH

The arrival of spring will open up many opportunities. Offshore the snapper will gather on the inshore reefs and the spring period heralds higher rainfalls bringing mulloway to hunt the exchanges of fresh and salt water around river mouths and beaches. Further offshore, the mackerel and tuna will slowly recover as the water warms. There has been an amazing run of striped and blue marlin throughout southern Queensland in previous months. Hopefully that improves with the heavy tackle season for black marlin starting around October.  It’s also getting onto the last months to target wild barramundi in much of Queensland due to closures beginning in November, and then the wet season. There are exceptions in some stocked waterways.

It’s tailor season! September is known for the onslaught of huge schools of tailor on the beaches as they travel northward. Fraser Island is the east coast hot spot, but they are common right throughout the beaches of Victoria, New South Wales, Western Australia, and southern Queensland. The evenings are prime times to hit the surf beaches but it’s a good idea to wear your fluoro workgear, due to the numbers of 4WDs running up and down the sand.

This brings me to the sad news that fourth-generation Australian fishing reel manufacturer the iconic Alvey Reels is closing their doors. I am testament to their claim that Alvey Reels “never need replacing”, having fished with an Alvey reel ever since I was a pup. From Sydney’s north, you will barely find a beach fisho without a virtually maintenance-free Alvey. In my mind, it’s the only surf reel that will truly go the distance in the salt, surf and sand.

To the Alvey family, thank you for the fond, fishy memories!