Last month, I wrote that Yemmy was still unregistered but he is currently with my Sprinter guru friend who is fixing anything that could stop him getting his roadworthy certificate. Hopefully by the time you read this, he will be legal again and ready to continue roaming the roads of this fair country.

Little did I know the roadworthy check would turn up that he was still registered as a van and needed to be certified as a motorhome before the certificate would be issued! The engineer doing the certification found some poor welds under Yemmy’s window frames plus the exhaust pipe was too short. The welding is not easily fixed as it’s in an inaccessible place although the tailpipe extension is simple. 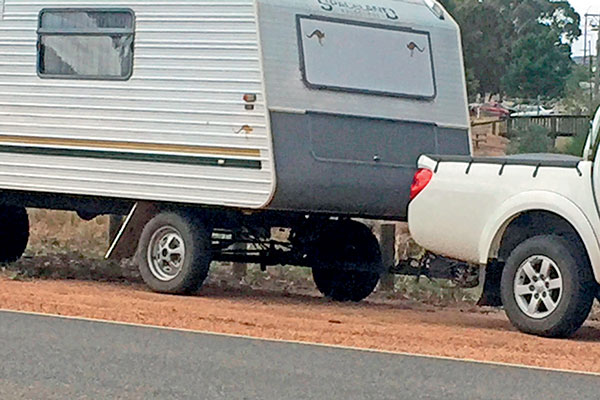 All this meant he couldn’t be re-registered in time for me to drive to Mallacoota for an ACC Branch muster recently so l had to cancel the booking. They don’t have cabins!

On top of all this, Yemmy’s personalised number plates were lost and I’ve had to order replacements for $160.63!

HELICOPTER FLIGHT ABOVE THE TWELVE APOSTLES

I mentioned last month was that I would be staying in a cabin at the Port Campbell Caravan Park as Yemmy was still indisposed. The studio room I stayed in for two nights was okay, although there was no microwave or oven to heat my frozen pizza!

The meals in the Port Campbell Hotel where we had dinner on the Saturday night were delicious and huge.

After our wonderful ACC bacon and eggs communal breakfast the next morning, I drove along to where they run helicopter rides to the Twelve – or, should I say, 8 or 9, Apostles. I chose the mid-range flight but, as usual, they wouldn’t take a single booking but said that if a couple booked, and they were agreeable to me taking the spare seat, I could go with them.

Fortunately, a couple of young men came and booked and said I could go along. Unfortunately, they had put too much fuel in the three-passenger chopper to take off with us three on board and we had to wait nearly an hour for them to burn off the surplus fuel by doing shorter trips with just two passengers.

It was well worth the wait and we flew in perfect weather along the coast as far as the Bay of Islands and the Peterborough township. The viewing was superb.

A friend asked me later on Facebook if I’d looked under the seat to make sure Murphy wasn’t aboard but I assured him that, as my flying companions were two young Irishmen, I had felt perfectly safe.

I often wonder why caravanners carry so much weight on the back of their tow vehicles when a dolly under the front of the van could take it all and leave the tow vehicle to just pull the caravan instead of partly carrying it?

I once put together specifications for my dream outfit if money grew on trees. It included a weight-bearing jockey wheel with pneumatic suspension built in to the A-frame that not only took the weight but also was steerable when the unit was unhitched. With no weight on the towbar, unhitching was easy.

Many of my futuristic ideas have since become standard practice like air suspension – although mine could be adjusted for height and could be lowered down to make a step unnecessary; pneumatically controlled awnings that could be retracted into the roof – electrically operated awnings are now available.

All this is leading up to the fact that I saw a caravan with a built-in dolly under the front parked on the roadside in Stawell, Vic, recently. Its wheels were all mounted under the body making the rig very high. The owners were away so I couldn’t ask them about it but I was impressed and took a few pics.

See you down the track.