The subject of whether you should require a caravan license to drive a vehicle towing a caravan has been raised many, many times over the years. It has divided caravanners in caravan parks all around the country, and one of the principal objections is that many people think it’s just a government revenue-raising exercise. I suspect, unless there’s sharp increase in caravan-related accidents, it’s never going to happen but I also think it’s a good idea that it does and here’s why…

There’s no doubt that, over the last decade, caravan weights and, hence, tow vehicle requirements have increased dramatically. A caravan with a loaded weight of over 3000kg being towed by a vehicle with a tow rating of 3500kg and a Gross Vehicle Mass (GVM) well over 3000kg is not that uncommon. That means a fully loaded combined towing mass of at least 6000kg. Yet a considerable number of people who are either first-time caravan buyers or had their last caravan back in the late 70s or early 80s have spent most of their driving time in a Holden Commodore or Toyota Camry (GVM circa 2100kg), probably towing nothing bigger than a box trailer. I’ve discovered that apparently Holden doesn’t like to tell you GVM or Tare weight figures for its vehicles – they are very difficult to find. So, let’s say that combination above has an average combined mass of 3000kg. 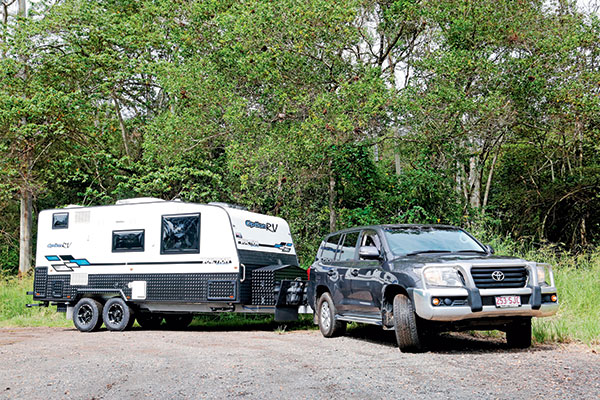 And offroad caravans are becoming more popular these days. Many of them are in the 3000kg-plus category and driving on a serious dirt road is quite different to a sealed road. Trust me on this. On a photo shoot a few years ago, I went around a loose gravel corner for the photographer and, while the tow vehicle did just that, the caravan had other ideas about going straight on. It made for some interesting photos but I made it safely in the end.

Another factor raises its ugly head, here, but I’ll try to be polite. Many modern caravan buyers are in the 70-plus age bracket and, unfortunately, at that age, your eyesight, coordination, reflexes and strength are generally going in the wrong direction.

In the motorhome world, things are a bit different. Anything with a GVM over 4500kg and under 9000kg requires a Light Rigid (LR) truck license and anything over 9000kg in a vehicle with two axles requires a Medium Rigid (MR) truck license. To get either of those licenses, you have to take both a knowledge test and a practical driving test. A few years ago, I lost couple of photographic jobs because I did not have my MR license. So I decided the time had come and, on the advice of the driving school, actually acquired my Heavy Rigid (HR) license. It was a good reminder of the road rules and an opportunity to brush up on my driving skills. Money well spent, I reckon.

From my experience on the road, a motorhome with a GVM of 6000kg, based on a rigid cab chassis, is much easier to control than a tow vehicle/caravan combination of the same GVM which has a very flexible coupling in the middle, meaning the caravan can operate quite independently of the tow vehicle. So why does the former require a license and the latter, a less stable combination, not?

A caravan license, if it ever comes to pass, should include a properly instructed training course on caravan handling, both theory and practical. Even if that never happens and you are a newcomer to caravanning, there are companies that do run caravan towing training courses.

Recently, a number of ute manufacturers have increased the tow vehicle ratings to 3500kg, the same as larger 4WDs like the Toyota LandCruiser. This sounds like good news, however, there are a few things to keep in mind. With the utes, that 3500kg gets de-rated as soon as you start putting load into the vehicle and there is also the Gross Combined Mass (GCM) – total weight of tow vehicle and caravan – to consider as well. The LandCruiser’s GCM is 6850kg and the Ford Ranger’s is much lighter at 6000kg.

Additionally, the LandCruiser is nearly 600kg heavier than the Ranger and that can make an incredible difference to the stability of the overall towing combination. Don’t get me wrong here, I think utes do make good tow vehicles, just make sure you understand the weight factors because that advertised 3500kg towing capacity often isn’t anything like that at all.