As some readers of this blog may be aware, Denyse and I recently purchased a new petrol Ford Territory Titanium. The vehicle was equipped with a GPS and when we asked if it had red light and speed camera alerts, we were told it did.

Unfortunately, we found that these features were not included. We made several inquiries about updating the maps (in particular) as well as incorrectly marked speed zones but we’ve been met with the suggestion that updates can only be done with a service. This would be at our cost, which makes that about as useful as a chocolate teapot.

That was the first problem. A second problem arose after we took delivery, when we discovered that the glovebox light was permanently on, getting red hot. We thought this could flatten the battery or even start a fire because of the papers in the glovebox. So far, the dealer has made two attempts to adjust the light switch, but it still appears to be on all the time. We have now taken the bulb out. 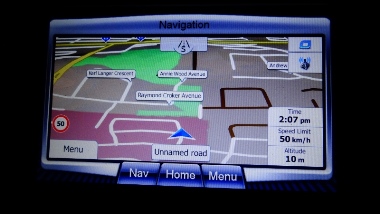 But then there was a third problem, this time with the battery. The metal tie-down strap over the top lay directly over one of the cell caps, meaning you had to unscrew the battery tie-down every time we wanted to check the battery water level. The battery sits in a special cradle and cannot be moved. Who designed this?

After a very determined stand by both Denyse and me, the dealer agreed to alter the tie-down strap at no charge to make it lie between the cells (see the photo). He managed to take it off, drill a new hole in the cradle and bend the steel strap, so that it now clears the battery cap and sits where it is meant to, between the caps.

Even though these problems are quite minor, the design issues with the tie-down strap and the glovebox light switch were disappointing. I guess this all shows “Buyer Beware”. We have now driven nearly 3000km and are otherwise very happy with the vehicle — but it’s early days yet.

So what’s the lesson here? Be sure to check a tow vehicle well before buying, even if it’s new. Check the vehicle thoroughly when you take it home.

YOUR SAY: Have you bought a new tow vehicle, only to find it wasn’t quite right? What was the problem? How did you resolve the situation?