Have you noticed the number of signs in caravan parks? I notice a lot of people don’t take a scrap of notice of them.

This year Denyse and I have seen more signs around parks than previously (we think). In fact some parks have a forest of signs to greet you on arrival. Some parks have a large list of do’s and don’ts. Others just have a few. Some attempt humour, while others give the bald facts. At the free camp beside the water hole at Julia Creek, a sign states “Please keep off the grass” — yet many vans were parked on the grass when we called.

The best we have seen at one park read “You be nice to us, and we will be very nice to you”. There were no other rules. 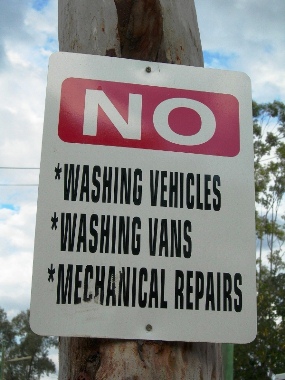 Some signs around parks are misspelt, some are humorous, while others try to reduce liability by saying they are not responsible for things such as tree branches, dropping, and so on. Of course, you always have recourse to legal action, and this type of sign does not reduce the park's duty of care.

Most signs are prompted by obvious need: signs in the NT stating “Drive on the left hand side in Australia” were installed after a spate of accidents involving continental backpackers driving on the wrong side of the road.

The signs we hate are the ones pointing to a tourist spot, but don’t tell you how far it is or if you can turn your van around when you get there. When we followed a sign to Little Millstream Falls (not THE Millstream Falls mind you) near Ravenshoe, Qld, we were lucky enough just to be able to turn the van around on the track when we got there. If there had been another van there we would have had to reverse out.

Some towns are erecting historical signs on buildings such as “In 1868 there was a shop here” yet now there is a new house or supermarket. They are not of much interest over all, because all old towns had buildings that have fallen or burnt down over the years. Having said that, we did read a sign on a plaque in a corner garden in a van park that said “On 12th Jan, 1878 absolutely nothing happened here”.

YOUR SAY: What’s the best sign you’ve seen while on the road, in a town, a place of interest, or while at camp?