Vintage caravans have a special significance for their owners. Few of us would think of giving a nickname to our home, or modern caravan or car, but many vintage caravan owners bestow a special pet name on their caravan, like it was a pet or a member of the family. Sometimes the name is painted on the caravan for all to see, while other times it just happens to be mentioned in passing. But they usually have one thing: the reason for the choice of name is usually a mystery to others.

Some vintage vans are given names which give a subtle hint about their age. Chris Dagg from WA has a 1968 Viscount Valiant nicknamed Lady Madonna. You might think that Chris is just a Beatles fan, but the connection is not quite that simple. The song was a hit in the year the caravan was built.

Chris also has a 1958 Globetrotter named Gladys but the name has nothing to do with hit songs from 1958. The “Gl” from the brand name was simply recycled to create Gladys the Globetrotter. In the same style, we’ve seen a vintage Franklin nicknamed Frankie. 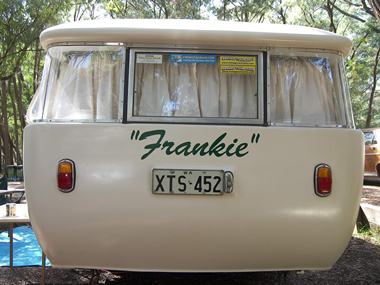 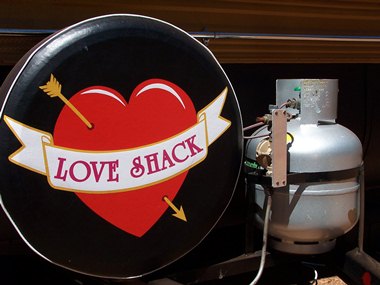 People find all sorts of amazing reasons for choosing their caravan’s nickname. Some relate to the appearance of the caravan, like the rounded fibreglass Sunliner named The Egg, while others nicknames actually refer to the tow vehicle, like Caddy Shack or Go Far – Fargo.

Some vintage vans are named after the owner’s wife/partner, like Maurice Lyons’ 1957 Sportline named Ruthie. Others are named in remembrance of a deceased pet, friend or relative. Then there are some that have been named after past icons, like Elvis, Marilyn, JFK or even Betty Boop.

And then there are some with names like Love Shack, where it’s best not to ask why.

YOUR SAY: These are just some of the many amusingly named vintage vans we’ve seen during our travels. What great or amusing caravan names have you spotted in your travels?