BLOG: WHICH TYPE OF TRAVELLER ARE YOU?

OVER THE YEARS, the RV community has settled out into several sub-groups. Have a read, and work out which one encompasses you.

These are people who travel from southern states to the north of Australia for the winter.
A large majority have found a van park they like, which they visit each year for several months at a time. They meet up with the same group of old friends and play bowls, have golf days or craft sessions, play bingo or trivia and always have happy hour together, often in large groups. Beach walks are also popular, as are group meals at the local pub or club.

These folk seem happy just to enjoy the better weather, often commenting on how low the temperature is at home. They share their problems and happy times with the group, and are greatly saddened when a group member is too old or too ill to return.

By "travellers", we mean people who do not stay in one place for more than a week or so, unless it is a significant destination such as Broome or Darwin, where they may stay for up to a month.

Basically, these folk enjoy the journey and seeing new places –
they will stay around a week, do the tourist things in each area, and then move on. This is the main focus, rather than heading for a destination and staying for several months. Often they will stay in a mixture of free offroad camps and caravan parks.

These people are generally on the road for up to six months, and enjoy meeting up with friends made on the road. We consider ourselves to be in this category.

We meet increasing numbers of travellers who tell us they do not stay in caravan parks at all, while some call in only infrequently to replenish their water, charge batteries and do their washing. Often they will stay in a free offroad camp for as long as their drinking water will last, especially if the campsite is near water, where they can catch fish or redclaw. Others find a convenient place to chill out in the warm weather. Many of these folk have a dog with them.

Obviously, their RVs are set up for free camping with solar panels or a generator, large water tanks to allow them to use their ensuite, and other ingenious modifications.

We're interested to know which group, if any, you belong to, and why. 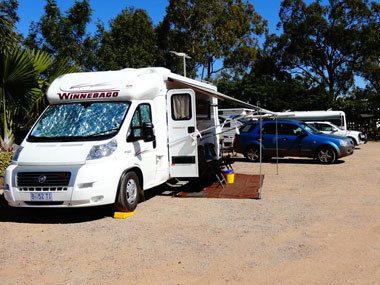