THE BEST REASON TO CARRY A UHF

WE'VE HAD A UHF radio in our tow vehicle for years now. We mainly use it to contact heavy vehicles wanting to overtake, or to talk to other travellers on the road.

We know many caravanners do not carry a UHF radio, citing many reasons, including not wanting to listen to truckies’ swearing on channel 40. It's important to note that channel 18 is now the caravan and motorhome call channel.

The importance of carrying some form of relatively inexpensive (from about $300) 5W radio was brought home recently when we encountered a gang of bikie members travelling towards us. We were on a narrow, single-lane bitumen stretch about 80km south of Normanton, heading for Cloncurry.

One of the bikies came off his bike at speed and headed straight for us, rolling over and over just like a rag doll. I jumped on the brakes and managed to stop our rig only a couple of metres from him, half on and half off the road. Meanwhile, his bike skidded down the road on its side, just missing our car and van, and spilling petrol and oil. Fortunately there was no fire.

Being a doctor, Denyse jumped out and checked his condition while I backed up and tried to contact someone on my two-way car radio. Of course, there is no mobile phone reception out there.

I managed to contact a homestead on duplex channel 6, who phoned Normanton ambulance and police. At the time I was reviewing a 5W handheld Uniden UHF radio for Caravan World , and had that with me. I was able to take it out on the road and talk to the homestead and ambulance (via a relay) while directing traffic and helping Denyse. This worked much better than trying to use the car radio, and the handheld radio was just as powerful.

The ambulance arrived an hour and a half later, and we could continue our journey. This is just another instance where a CB, UHF radio enabled us to contact help on a lonely section of road.

Do you have a UHF radio? Share your opinion below. 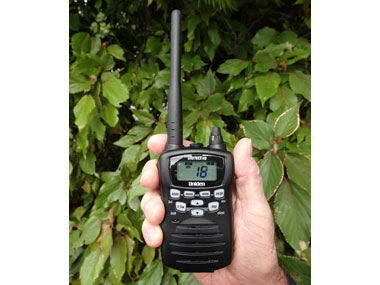