THE RESTORATION OF VINTAGE VANS

FOR ROB MILAZI, PREVIOUS owner of our beloved 1968 vintage Roma van, Betsy, bringing the old girl back to her sparkling best was as much about compromise as it was a straight caravan restoration.

“I actually wanted to renovate a house, but that’s a really big project,” he said. “The other option was restore a car, but then I came across this van and it was like the best of both worlds.”

Rob originally found the unrestored van in what he calls a caravan graveyard, down the back of a park in an area where old vans had been sent to die – and act as seasonal accommodation for Vic fruit pickers.

“It just caught my eye and I kept going back to have a look at it over the weekend we were there,” he said.

A closer inspection immediately revealed that one of the corners of the timber frame was suffering moisture damage, but the extent of the problem didn’t reveal itself until Rob had a really good look.

“After I saw the moisture in that one corner, I removed the aluminium and the whole lot just crumbled,” he said. “I ended up finding out there was only one good corner on the whole van.”

The water damage meant the frame had to be built-up again. So Rob went to work and ultimately stripped the whole thing back before using new pine wood to reinforce Betsy’s old bones.

“I am not the kind of person who likes to do things by half,” he explained. “That’s why I ended up stripping it all the way down and building it back up.”

In addition to the frame, the interior also needed its share of attention.

“When I saw the inside, everything was original, but the whole thing was very tired,” Rob said. “I really wanted to get rid of that ‘musty’ smell, so we ended up putting in all new cushions, with new foam. But the rest of the interior is original.”

In fact, it was this original interior that revealed Betsy’s true age.

“The vans back in those days didn’t have compliance plates or anything like that,” Rob said. “But when I pulled out the stove the serial plate on the back said it was from 1968.”

No wonder she didn’t want anyone to know her age.

As you could imagine, stripping a water-damaged 40-year-old caravan that had spent years sitting in the same place is not an easy, or quick, job. All told, the process took Rob around 18 months, but not all of those months were consecutive.

“It basically took me two whole winters,” he said. “I liked working on it in the cooler months because I had another project going, a swimming pool for the house, and I was working on that in the warmer months.”

As he said, Rob is not a man who does things by halves.

For anyone who has seen images of Betsy in these pages over the past few months, or was lucky enough to see her in the flesh (aluminium?) at any of the recent caravan shows, Rob did a terrific restoration job. But the whole thing is made more impressive by the fact this was his first caravan restoration.

“It’s true that I had never worked on a caravan like this before, but I’m a fitter by trade, and I’ve worked on cars and bikes in the past, so I had some idea of what I was doing,” he said.

The original plan was for Rob and his wife to leave the van out the back of their house as a guest room for visitors. But upon completion Rob became a victim of his own success and that plan was quickly nixed.

“It came up so well, I didn’t want to just leave it outside at the mercy of the elements,” he explained.

“We were then going to buy a car of a similar age and tow it as part of a vintage setup, but the old Mustang I ended up buying really wasn’t suitable. So in the end, we decided the best thing to do was sell it.”

Caravan World thanks you for that decision, Rob.

As a major prize giveaway, Betsy was handed over to her new owners in March this year after many happy months at CW headquarters. 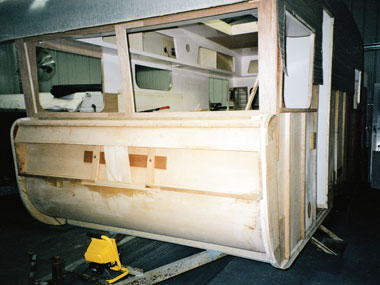