IT'S THE SAME every year... and locals and clued-in travellers aren’t complaining. In fact, I’ll probably be in strife for letting the cat out of the bag.

What am I on about? Every year at the first hint of warm weather, the mass evacuation of north Queensland begins. Suddenly every RV on the road is heading south, frantic to escape the torrid temperatures and threatening cyclones of the tropical north in summer.

But hang on. It’s only September – Spring has barely sprung – and the legendary wet season is at least three or four months away. Sure, temperatures are climbing, but they’re hardly unbearable. Ask those who are smugly sipping a cold drink in the shade of their annexes as the exodus gathers pace around them, and they’ll reluctantly tell you that September, and even October, can produce some top weather – and they’ll be staying a little longer in the beautiful, tropical north, thank you very much. 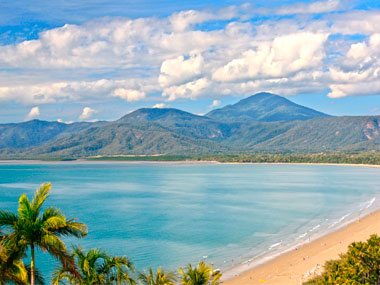 And corner a caravanning Queenslander and chances are they’ll admit that September through to even November is the best time to tour their beloved north – “After all those bloody Mexicans have gone south again,” they’ll add with a grin.

Buy them a drink and they’ll probably secretively tell you that there are plenty of good reasons to wave goodbye to the majority of southern travellers and stay put for another month or two...

The fact that most of your fellow travellers will be hitting the road is the major reason to stay. That means popular parks and camping spots that were booked solid throughout winter, will now have sites available – and possibly prime sites at that.

Instead of being stuck at the back of the park in a pokey site, you might score a beachfront position with a view. This also means you can wander at will, confident of finding a site for the night without having to book ahead.

Correspondingly, pressure on park facilities will be much reduced, so you’re less likely to have to line up for a shower or to use the camp kitchen. Park rates may also decrease as you move from peak to shoulder season and you’re more likely to enjoy a little relaxed, personalised service from park staff as they wind back after a hectic tourist spell.

Tourist attractions can also be quieter, which is a major plus considering that so many of the north’s attractions are nature-based, and thus best appreciated with a minimum of other people.

Activities enjoyed by travellers can also change with the weather, providing holiday experiences you wouldn’t usually enjoy during a chilly winter.

For instance, the later you stay, the more likely predominant winds are to be light, and seas correspondingly calm. This makes boating activities much more comfortable, whether it is in your own cartopper on sheltered lakes, or on charter vessels cruising to the Great Barrier Reef.

For the fishing types, the later you stay the more likely you are to catch the north’s iconic sport fish – the barramundi. Just remember that north Queensland has a closed barramundi season from 1 November to 1 February each year, so catch your barra before the end of October.

The warmer weather also means that swimming is a more enjoyable pastime and there’s no shortage of swimming spots in the north. From caravan park pools to crystal-clear mountain streams surrounded by rainforest, there are plenty of places to take a dip.

One word of warning: it’s best to avoid swimming in the ocean, as potentially lethal marine stingers begin moving into local waters at this time of the year.

That’s the only negative I can think of when it comes to Spring in N.Q. So, think about ditching the herd mentality. Abandon the exodus, and stay and play a little bit longer in the tropical north.

Just don’t let on I told you.