As more vanners integrate offroad sports into their adventures, manufacturers are responding in kind with internal garages, relegating luxury to the back seat.

The Dreamseeker F-14 Tomcat, however, comes to Best Aussie Vans 2017 with a fully-equipped living room plus space for all the sporting gear – but does it deliver in the comfort stakes? Let’s see. 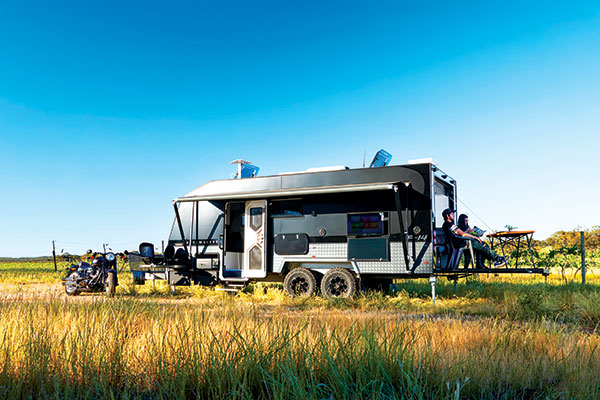 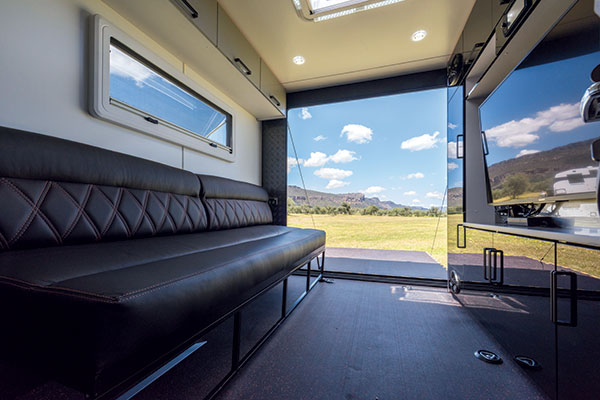 What can I say about the F-14? It’s a big black beauty if I ever saw one. Now, the chassis was specifically designed and built by Roo Chassis for the F-14. It’s made from 6in DuraGal and seems sturdy enough to be taken offroad if you wanted to. In fact, with the 4T Tuff Ride independent suspension and a set of mud terrain tyres there to back it all up, it’s really only the three massive televisions that would make you think twice about hitting the dirt. Although let’s face it, a caravan like this is always going to be an on-road van, so that’s obviously where the guys at Dreamseeker have focused their efforts. I can’t help but feel it could be finished off better underneath, especially when it comes to mounting electrical wiring.

The F-14 feels nice and sturdy on the road, and it should do too with 480kg of weight on the ball when it’s unloaded. But obviously when you chuck a few motorbikes in the back it brings the weights back into line. Dexter sway control adds a little confidence while you’re on the road too, not that you need any more confidence when you’re lugging it around with a big F-truck like we were.

When it comes to the inside, it all feels nice and solid. You’ve a firm honeycomb floor for sure footing, and cabinetry that’s nice and practical to use, too. I thought the combined toilet/shower ensuite was a bit cramped for the van’s size, and felt a little old school to be honest. But, it serves its purpose nonetheless.

The F-14 Tomcat is a niche product meant for those amongst us who can’t bear to leave all their big boy toys at home.

This smart looking and well constructed 21-foot ‘toy hauler’ is built on a heavy duty chassis with independent dual-axle suspension featuring twin shocks and 12in brakes all round. With a Tare weight of 3220kg and a high ball weight, you need a Ford F250 or similar to drag this big imposing unit around.

The Tomcat’s body features a fully welded aluminium frame and alloy composite wall panelling with insulation. Inside the van, the back half is taken up with the toy hauler area, which in this case had been custom built to take a Harley-Davidson motorbike weighing in at over 300kg. When the bike has been removed the area becomes a huge entertaining and lounge area, while the loading ramp/rear door becomes a deck for imbibing on your favourite fluids. There’s a big TV (one of three!) an impressive sound system that would do my home lounge a favour or two, and a satellite receiving system that wouldn’t be out of place in the battlestar Galactica.

The other half of the F-14 van is loaded with features although some may feel it’s a little cramped for such a big rig. There’s an east-west bed up front, basin, toilet, washing machine and shower down one side while the kitchen and sink take up the other. All the cabinets are made of 12-15mm lightweight ply fronted with high quality HI-MACS laminate giving the whole interior a very classy look.

Outside there’s a roll-out kitchen and fridge while an impressive battery (including Redarc BMS) and solar system enhances the outdoor lifestyle wherever you may take it.

Toy haulers in Australia are not totally rare but certainly a bit unusual. For that reason, it makes the Value for Money category very difficult to judge because it’s clearly an enthusiast’s caravan where the prime reason for purchase may not be caravanning. An additional cost will be a tow vehicle, because the ATM pushes the towing limits above the 3500kg (LandCruiser) category and into US pickup truck territory.

Rating it on Suitability for Intended Use is just so much easier – achieving its goal of carrying a motorbike or quad bike or even a full family set of bicycles – the F-14 is also designed for a family as it’s fitted with bunks and, on this, it scores very highly indeed.

To fit the garage/storage area in, the rest of the living area has been compromised in size and layout. Not too much, though. Probably the most obvious one is the east-west main bed (rather than an island bed) across the front of the van. That does give the van interior a different look and one which offers plenty of flexibility, especially in the rear area with the folding seat and high-end audio-visual system.

I do wonder whether this toy hauler might be better as a fifth wheeler. For a start, it would give more interior space in the nose cone area up front and secondly it would improve the tow vehicle range considerably. For instance, an Iveco Daily 70C with a GCM of 10,700kg is quite readily available in Australia and would be an excellent prospect. Just a thought.

A rather unique on-road toy hauler, the Dreamseeker F-14 Tomcat comprises a man cave/kid cave, which quite simply is ‘dirt biker heaven’. It fits two to three dirt bikes; or a quad bike, or a Harley-Davidson motorcycle.

And when the ‘boys have put away their toys’ there’s a 49in Smart TV, which runs off a 3000W inverter, and a full Sony sound system (including a 1000W amplifier) for enjoyment…  It’s enough to blow your mind!

The drop-down ramp or tailgate (I call it an entertainment deck) is made from very durable non-slip recycled rubber. It comes with a built-in flyscreen and electric winch as standard inclusions, albeit not fitted on this model during this year’s BAV.

Internal space has been saved courtesy of an east-west bed and a shower/toilet combo. (The shower has a stunning glass black door.)

The black chrome tapware and premium modern handles are eye-catching and up-to-the-minute, and the grey overhead cupboards and black lower cabinetry are a nice contrast.

A Camec 4kg front-loading washing machine concealed under the vanity basin (plus a cupboard with removable shelving above) is perfect for cleaning the thermals after a hard day riding on the tracks.

And if your whim is dining and relaxing al fresco style following a dirt bike ride etc, then there’s a slide-out external kitchen and a 12V drawer fridge, which is ideal for holding meat for the barbie and cans of drink.

But with a 4.5T ATM, this ‘gentle giant’ requires a tow vehicle such as a Ford F250 to act as the pilot!