Best Aussie Vans 2017 was a stretch is many ways. We pushed the limits of what we could do in an effort to make the event and its outcomes the best they could be. We travelled more kilometres, we stayed at more parks and we shot at more locations than any year before. With 12 caravans to film, photograph and importantly assess, it would push the limits of ability but again, like years been we bandied together to pull it off. 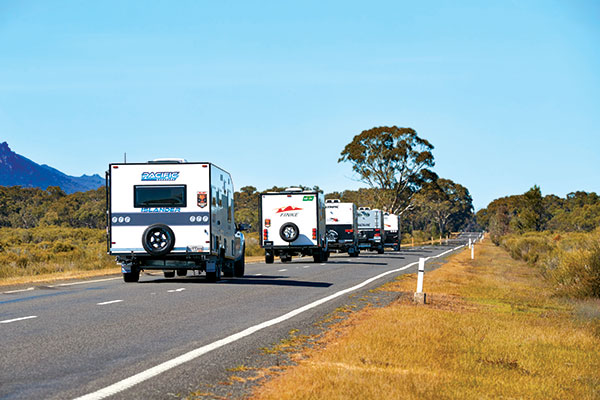 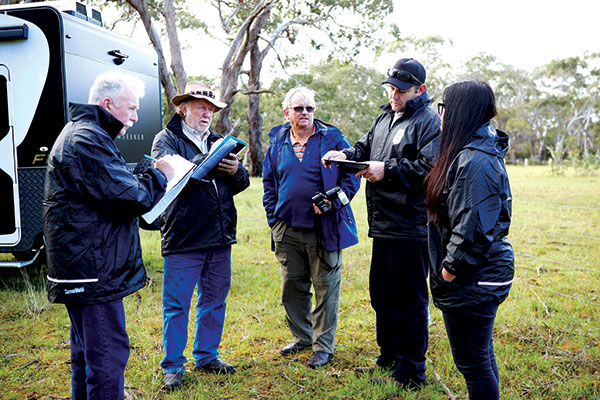 We did things different this year staying at multiple parks across the gorgeous Grampians region around three and a half hours west of Melbourne. Our first base was to the northwest in the capital of the Wimmera region, Horsham. Here we stayed at Wimmera Lakes Caravan Park, a well run and modern park with enough room to park all entrants plus some with ease. It made the perfect base of operations for our daily trips to filming locations.

The Wimmera region is heavily reliant on agriculture with canola the dominant crop in our time there. It made for a stunning backdrop with the yellow a stark contrast to the lush greens of other crops and red dust from the farm access roads. Like all of regional Australia, the people were welcoming and accommodating to our varying needs and the food is great as is the shopping.

From Horsham we shot a great deal of what you see here from Grampians Olive Co.’s property at the foot of the ranges. A stunning backdrop to say the least, it gave us the room we needed to keep shots fresh and exciting for you.

Our second base was Hamilton, to the south and east of the Grampians. Here the landscape was much the same as the north, dominated by agriculture but it again gave us access to fine foods, friendly people and some of the most picturesque scenery imaginable using the Grampians National Park as a backdrop. Our public viewing day happened early on Saturday, midway through BAV and thankfully close to Lake Hamilton Motor Village and Holiday Park, where we stayed. The turnout was fantastic, better than any year before with an estimated 1000 people in attendance. Talking to some, it became apparent many were from out of town, some even from as far as Melbourne, all looking to see what was new and exciting in our word of caravans.

A special thanks must go out to the tireless teams that supported our endeavours. Each of the shires from south, to north and east to west all helped us with compliance, arranging opportunities with caterers and accommodation. To them you have our thanks.

Like years been, we had four categories in BAV17 from small vans, to price categories including over $100K. The most hotly contested was, unsurprisingly, where most caravans are bought and sold, the $65-80K category.

This issue we delve into the Small, $50-65K and $80-100K categories. In Small we had two vans going head-to-head both with an offroad focus in the Dreamseeker F1 and MDC XT12. Where they differed was in fitout and internal focus with the Dreamseeker going high-end and with comfort in mind while the MDC’s focus was more off-grid and ruggedness. Read on for how they got on and what our judges thought.

In $50-65K we had the Kokoda Cadet II XLi Platinum and Atlantic Endeavour E206-1S RD, both exceptionally well reviewed in the lead up to BAV17. The Cadet has the most to prove coming from the successful Kokoda stable while the Endeavour came to BAV with a reputation for value for money and ease of towing.

Next up was the category that we feel is one of the fastest growing and most likely to produce the tightest battle, the $80-100K bracket. With two vans again this time AusRV’s offroad focussed Byfield and the legendary Roadstar Voyager, a caravan built without compromise, we knew it would be tight between these two fierce competitors.

In the competitive $65-80K category we had five fine competitors by way of the AusRV Finke, a composite panelled and family focused 19 footer; the Pacific Island Club, another composite panel option but with a focus on luxury travel for a couple; the Legend Trackline, a tough competitor that had everyone taking a second look; the New Age Big Red, a stylish looking road-focused option and the Olympic Javelin X8, a 27 foot with all the internal space you could ever need.

The last category, for caravans $100K, over again it came down to two vans but two with very different target audiences. First up was another quality Roadstar, the Siris: the definition of tough external and quality luxury inside. It came against the second Dreamseeker at BAV and this one, like the F1 in the Small vans category, pushed established conceptions of what a caravan can be off the cliff. The F-14 Tomcat is known as a toy hauler and with doors down, it opens the eyes to dreams of hauling bikes, hunting gear and any assortment of adrenaline-inducing toys.

It takes more than just many sets of hands to make it all happen, they have to be the right people. From judges to operations managers to stills and videographers, we had up to 40 people on the ground at one stage but everyone was eager to see the best result so we all banded together and saw it through.

We had slightly different judges to years been with two new faces working with two of our most well known. Ron Moon joined fellow BAV rookie Michael ‘Borgy’ Borg with veteran Field Editor Malcolm Street and Staff Journo Peter Quilty. Borgy brought with him a technical nous, particularly in chassis and brake systems, that proved valuable while Ron, with his years upon years of global exploration, bought the ability to cut through bullshit and recognise true capability in design. Of course, Peter came with his unwavering humour which had everyone laughing between the odd cocked eyebrow. That leaves Mal who like Ron, challenged the manufacturers to prove their marketing claims were legitimate while also going to extreme depths in technical assessment; Mal’s work was a masterclass in thoroughness.

Our team of videographers included BAV regulars Anna and JP. Manning the stills cameras were two BAV rookies in Graeme and Cam. Both had shot caravans for us in the past and showed the needed metal to see the job done and to a high standard. On the ground was our never tiring Lauren who takes the reins at all of our events. Her role is probably the least envious and most demanding with a seemingly endless set of questions flooding her way throughout every day and night.

As the Field Editor for Caravan World’s sister publication Camper, Michael ‘Borgy’ Borg has lived and breathed the camping lifestyle for decades. In a previous life, he earned a quid spinning spanners, which comes in handy out on the tracks.

A DIY tragic with five acres of projects on the go, including a decade-epic 40ft conversion with his old man, on-going repairs to his heartbreaker ’Cruiser Aunt Tilly, and continual upgrades to his Jurgens’ hybrid, Borgy’s takes five by gifting bait to fish in bush streams or cooking up a storm in his camp oven.

Ron Moon and his wife Viv have been 4WDing and touring remote Australia for more than 40 years.

After eloping in the 70s, they wrote their first guidebook in 1984, and from 1988 Ron was editor of 4x4 Australia for 15 years and has almost spent another 15 years as their roving editor-at-large.

Together the Moons have written more than a dozen guidebooks on travelling remote Australia.

When Ron and Viv aren’t in front of a computer screen they can generally be found travelling somewhere in a 4WD, and if it isn’t work related, you can bet there will be diving and hunting on the list of things to do!

Field editor Malcolm Street began caravanning in the early 1970s, first in a Viscount and later in a York, the former towed by a Holden Kingswood. Malcolm has RV’d extensively across Australia, New Zealand and Britain.

He became an RV journalist in 1999 and joined CW in 2002. Each year, he reviews around 40 vans and motorhomes in Oz and NZ. Yes, he’s a well-travelled bloke with no shortage of campfire opinions about how a given van could be better put together.

You might call CW staff journalist Peter a late starter, receiving a caravanning and camping baptism in his mid-40s. But roll on nearly a decade and he’s done his utmost to make up for lost time.

Initially, Gippsland was the primary stamping ground, free camping in idyllic bush settings such as Dargo and Licola, beside the Wonnangatta and Macalister rivers respectively. His first few expeditions were spent in tents, but he was soon hauling a Jayco Sterling behind a 1991 Mitsubishi Pajero. Pete relishes the freedom and relaxation of the great doors – just the feeling of being a million miles away from the rat-race.

Famous Kiwi artists Crowded House penned Four Seasons in One Day after emigrating to Melbourne, and with days over 30 degrees following days of drizzle and winds, we had it all.

We arrived in The Grampians with a forecast that would challenge us to not only to get the best out of the camera operators but also the tow vehicles when traction became an issue. Some reshuffling of locations was needed but aside from the crew at MDC who developed a small issue with their HiLux after pushing its limits on a slippery offroad climb, we ran without incident over the first days in the southern region.

During the length of the event, we travelled some 200km throughout the shires and as we moved north, the sun popped out. In an instant, layers were removed and everyone’s spirits lifted. Luckily for us, this happened a day before the public showcase held on the slipway of Lake Hamilton. The day broke bright and still with a forecast of mid-twenties, perfect for the manufacturers and representatives to be able to relax and talk to an interested public. Speaking to those who had been to one before the feedback was positive with everyone agreeing the turnout was the best it has been and the level of enthusiasm high too. AusRV even reported a sale, admittedly based on previous conversation in the weeks leading up, but the crew was still chuffed to say they sold one at the showcase.

Following on from the showcase was more filling and judging but with clear skies and dry pasture around The Grampians Olive Co.’s groves, nothing was an issue. We even finished slightly ahead of schedule, which could not have happened without the tireless support and can-do attitude of all involved. Thank you entrants,  judges, our crew and the support from everyone in the magical region of the Grampians.