Shoes have a habit of ‘walking’ while caravanning, and not only when you have your feet in them! I’ve encountered so many trips where my flip-flops and the like have gone AWOL.

And when it comes to camping, storing shoes is akin to organised chaos – in fact, a dog’s breakfast! 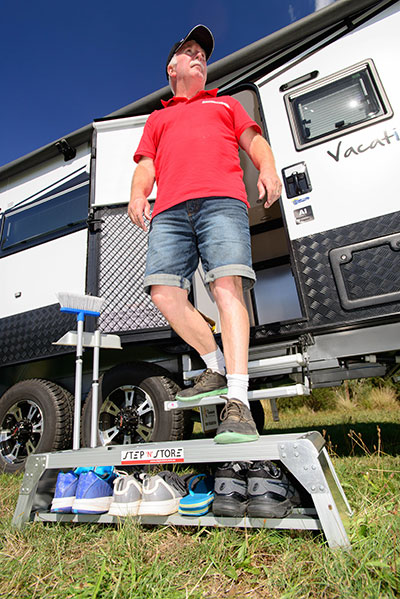 But the Step ‘n’ Store allows you to travel in an orderly fashion. No more disarray in the shoe department!

The innovative, lightweight aluminium caravan step has a waterproof shelf underneath that provides a rain-protected home for footwear, along with three handy storage holes for brooms, mops or umbrellas. And a surface spray can be applied to the shelf as an insect deterrent.

Invented and designed in Australia, the Step ‘n’ Store also has a convenient receptacle that holds a bin off the ground and secured while in transit.

Weighing only 6kg, the easy-to-lift step requires no assembly (hooray!), has ‘grip’ rubber feet and can act as a stable and sturdy raised platform for an Esky, making it easier to access and drain. It can hold up to 180kg when placed on a level surface and the rubber feet make it safe to store on the floor of your caravan when travelling (I placed it just in front of the caravan’s bed prior to tackling some undulating dirt tracks and it didn’t budge an inch).

This product can also be utilised around the home, with the receptacle able to hold a bucket, paint tin, tools and more. And it’s easy to clean.

I took the Step ‘n’ Store away during a recent review of a Roadstar Vacationer. And, I must say, it’s a step in the right direction for storage savvy caravanners.

Sadly, this grey nomad has a memory like a sieve. But with the Step ‘n’ Store coming along for the ride, I was amazed with the practicality of knowing where my footwear was at all times.

I also used it as a supplementary step for easy and safe entry and exit from the caravan.

I’ve since utilised the Step ‘n’ Store at home where it neatly stows my two sons’ football boots and runners etc., and has certainly tidied our front porch which was once littered with more footwear than the infamous walk-in robe of former Philippines First Lady, Imelda Marcos.

And it’s also great to have an upright umbrella at the ready on the doorstep given Melbourne’s notorious ‘four seasons in one day’ weather. It bucketed down with rain one night and the following morning I was relieved to find that all the shoes on the waterproof shelf were bone dry!

I’ve also sprayed the entire step with an insect repellent and I haven’t noticed a bug or spider within cooee of the bin I’ve placed in the receptacle. And with the bin and several sports shoes now safely outside, our humble abode has come up smelling like roses. The step’s storage holes also act as a new home for an umbrella and trusty yard broom.

The full product test appeared in Caravan World #564. Subscribe today for the latest caravan reviews and news every month!