Anyone who has ventured into remote locations knows the benefits of generators. Whether as a back-up or as your primary source of power, a reliable generator is a fairly important piece of kit when going bush.

The EU30iu Handy is very portable around the campsite, though it weighs 35kg, which needs to be taken into account when loading up your van and tow vehicle. We carried it in the boot of our LandCruiser and found the strong handles on either end made it fairly easy to unpack when needed. Lifting it out of the boot was strictly a two-person job. Obviously, if you have mobility or back issues, a generator that was permanently secured to your van (on a slide-out tray, for example), might be the preferred way to go, and Honda has numerous units to suit that application.

Otherwise, the Handy is, well, rather handy. A fold-up handle on one end and a set of wheels at the other mean you can wheel it around your campsite once you’ve unpacked it. A true back-saver. 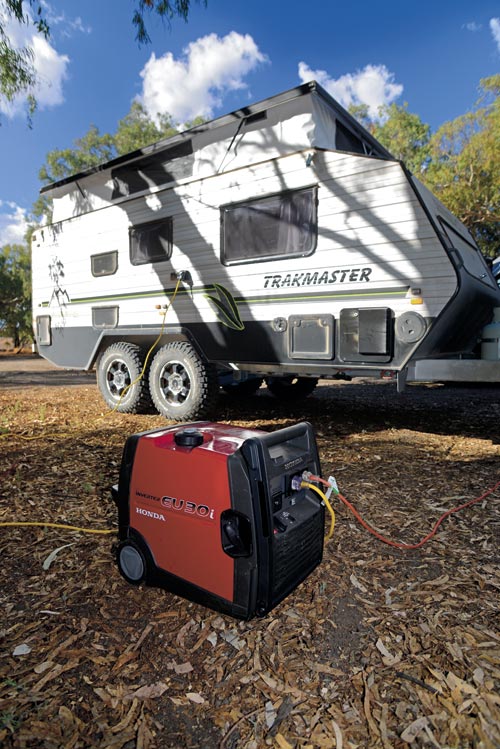 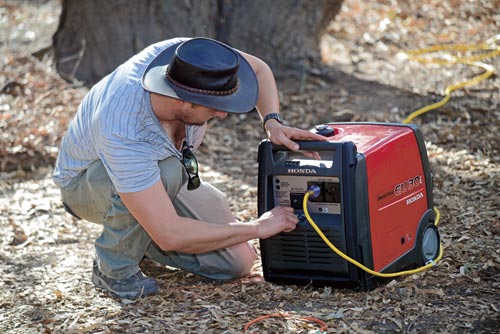 The high-speed multi-point alternator is integrated into the engine itself, a technology that Honda claims reduces the overall weight and size of the unit by up to 50 per cent compared to similarly classed models. For maintaining a regulated supply for running sensitive electronic equipment, such as cameras and computers, the generator also features a microcomputer-controlled sinewave inverter, which Honda says guarantees commercial-quality electricity.

The EU30iu employs Honda’s so-called Eco-throttle, which automatically adjusts the generator’s engine speed to meet the load demand. Because the engine will therefore not run at full capacity unnecessarily, the Eco-throttle maximises fuel economy and reduces noise as much as possible.

Finally, via a special cable, the generator can run in parallel with another EU30iu Handy, effectively doubling the output. I can’t, however, image a situation where you’d need that sort of capacity out in the bush...

As for fuel usage, the generator runs off standard unleaded. Honda claims 7.7 hours of continuous operation on a single tank, with the Eco-throttle switched on and running at 1/4 output. We ran the generator at various loads throughout the trip – its fuel capacity of 5.9L more than met our needs.

Overall, this is a quality generator that’s particularly portable around the campsite. Of course, whether or not you need 2600-3000W on tap depends on how you travel. Lots of people manage with a 1600-2000W generator, such as the Honda EU20i. But I liked having the additional capacity on hand, knowing I could charge the van’s battery while running the air-conditioner, microwave and other electrical equipment.

Fuel consumption Up to 7.7 hours (with Eco-throttle on and running 1/4 output)

Where Honda dealers around Australia