Malcolm Street — 14 February 2022
It can look a little odd when you first cast your eyes across it, but the Royal Flair Raptor proved to be perfectly suited for what it’s aimed at

Many an offroad caravan built in Australia has a somewhat characteristic look about it, both inside and out. There are, however, some that have a more distinctive appearance, a good example being Royal Flair’s Raptor which certainly stands out in the crowd for a number of reasons. Apart from the distinctive colour and decal scheme, this particular Raptor model has an external body length of just 4.1m (13ft 6in) which given the van has tandem axles, does give the van a somewhat odd but certainly very purposeful look about it.

There’s a very good reason for the purposeful look, the prototype model was built for company owner, Bill Deralas. A man who likes to do a bit of huntin’ n’ fishin’ but who desires a few no fuss home comforts in addition to a few ‘toys’ as well. 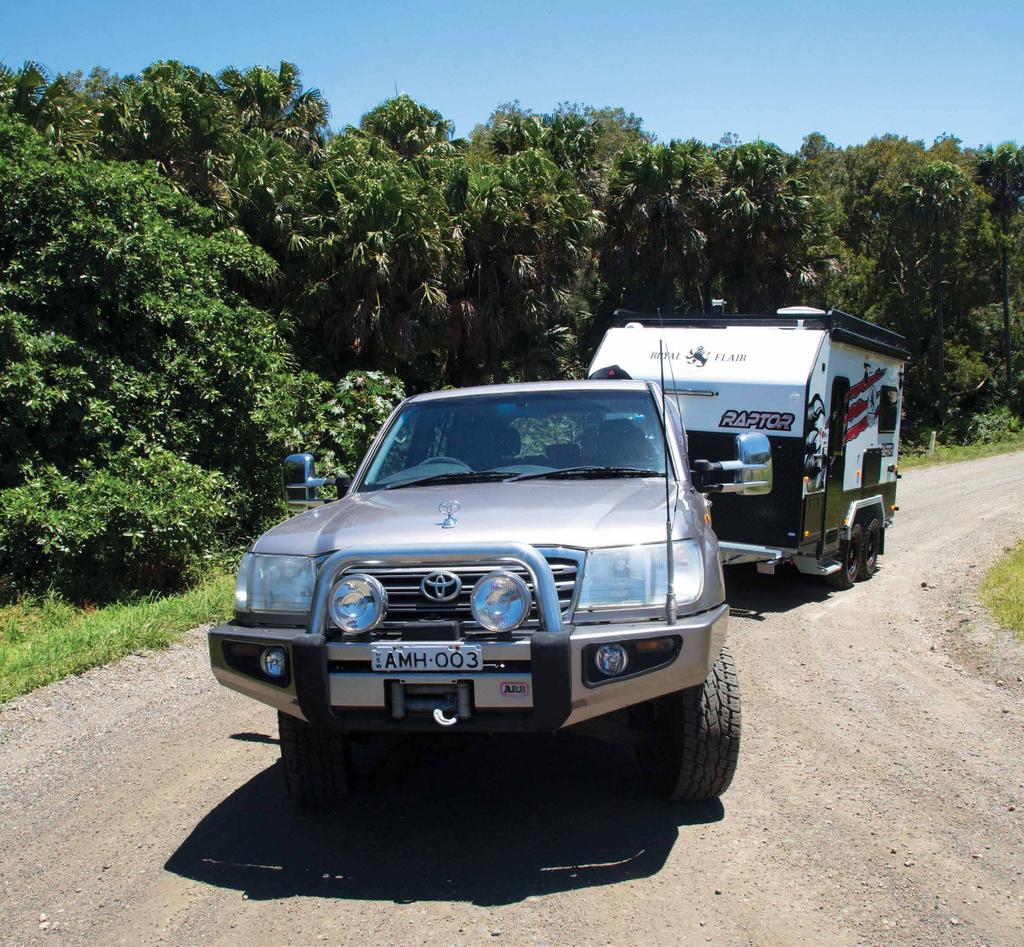 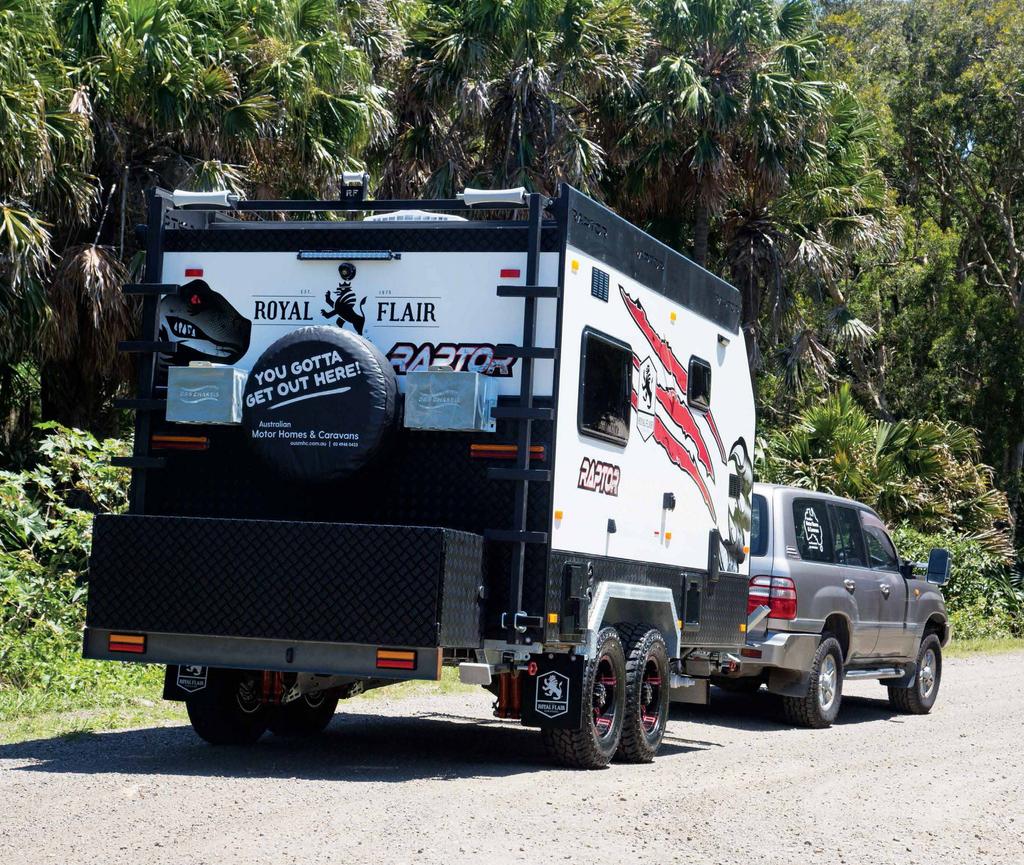 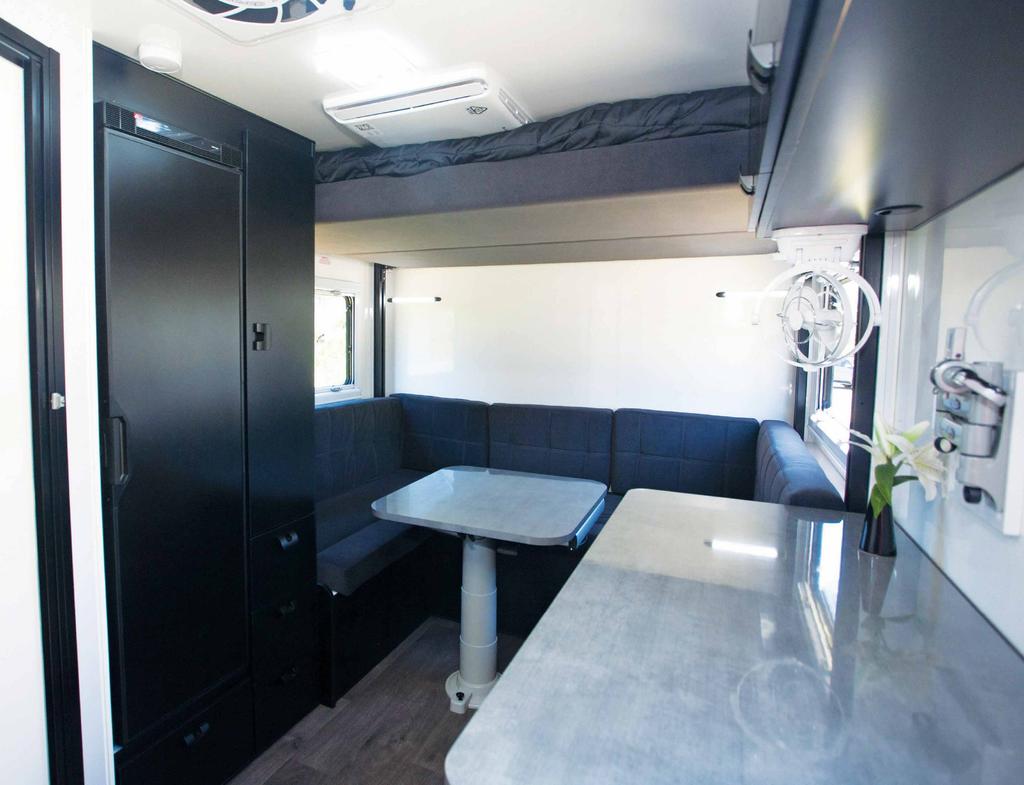 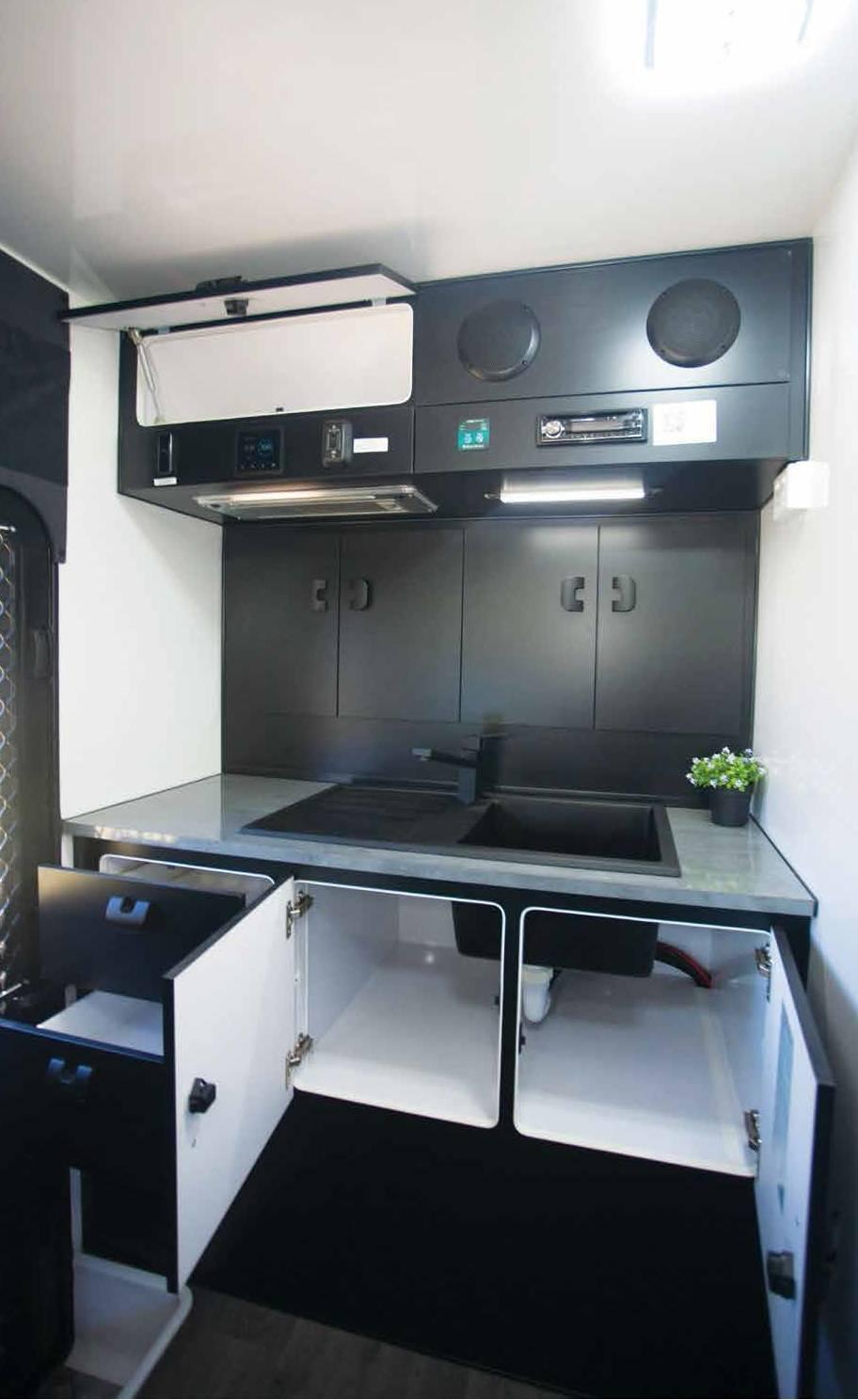 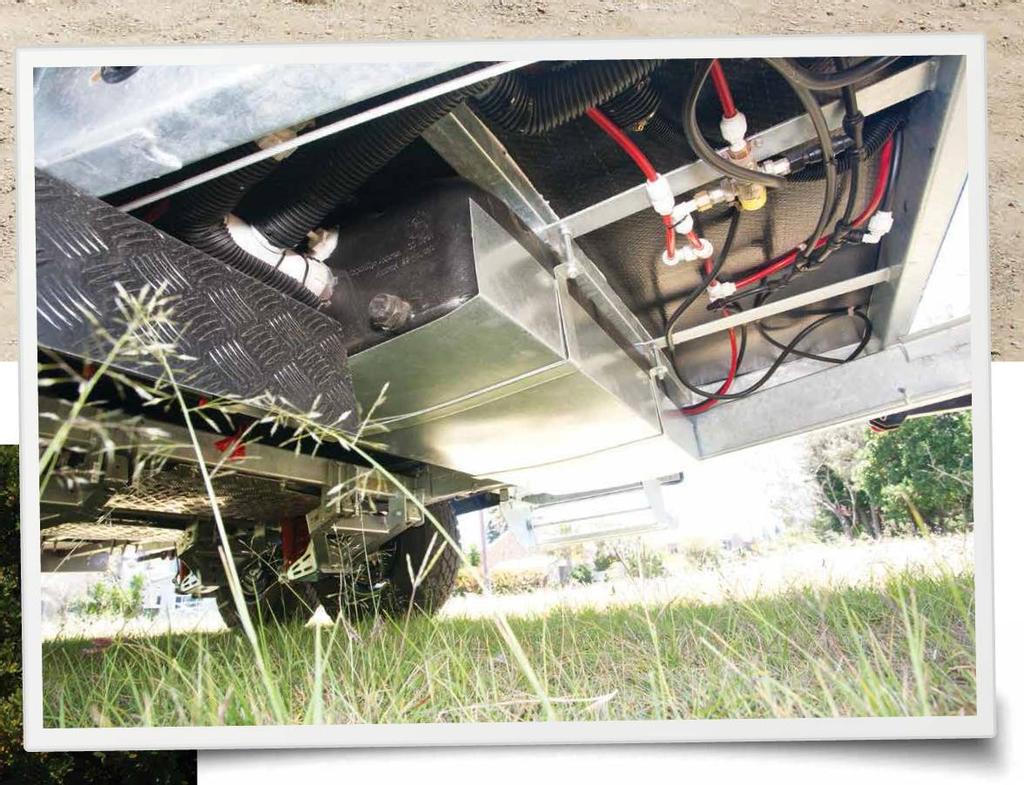 My review Raptor came from Australian Motor Homes and Caravans, and that’s important to mention, not only for the dealer’s assistance in getting the van ready but more so because this particular Raptor is custom made for AMH&C. The most obvious change is that it doesn’t have the rear folding tray that just about all Raptor models have. Instead, there’s a bike rack on the drawbar and the big storage box that is usually on the drawbar has been moved to the rear of the van.

A noticeable feature of the Raptor is the boat rack on the roof of the van, complete with rollers and a 12V electric CBS 3000 winch on the drawbar. I’m thinking the boat should not be too heavy since it will require some manhandling and there’s always the van payload to consider.

You might expect a solid construction for a van that’s built for some serious offroad travel, and that’s what you get. Solid 30mm fibreglass composite sandwich panel is used for the walls and roof, with the frame and cladding are combined into one structure. It’s a structure that’s strong enough to support the aforementioned rack and possible boat load. A little differently, the floor is one-piece lightweight honeycomb carbonfibre. It’s stronger than ply timber and impervious to water.

The rear of the van is a busy looking area. Mounted on the rear wall are two jerry can holders, a spare wheel and RHS ladders on either side. Across the rear, the large alloy checkerplate storage box has a slide-out on the nearside, suitable for something like a generator.

I suspect it’s mostly due to the short length of the van, but the nearside wall looks very busy too. There are the expected items like the habitation door, window and Fiamma awning but there’s also a couple of external speakers, power sockets both 240V and 12V, picnic table, three wall lights and a slide-out kitchen that emerges from the front tunnel storage. It should consist of a round stainless-steel sink and a three-burner cooktop but when I looked over the van, the latter item, like quite a few other RV components currently, was still in transit somewhere. There’s also a provision to have a Weber gas BBQ fitted.

Seeing around the van at night shouldn’t be a problem because there’s at least one light on every external wall. I particularly like the variable angle strip light on the front wall that can be used for nighttime hitching or unhitching or something like changing the gas cylinders over.

With a relatively short external length, the Raptor’s internal layout, with its forward door entry, is a little bit compressed, but there’s room to move and it has just about all the expected features and a bit more besides. The colour scheme was a little too much black and white for me in a confined space but that’s just a personal choice. Given this is a van that’s designed for handling dirt roads, there’s CaraFan Sahara dust pressurizing system.

A little differently from most designs, the bathroom cubicle is located at the front of the van in the offside corner. That leaves the rest of the front wall area for a kitchen bench. A second bench, complete with multiple drawers and cupboard space, takes up the nearside mid wall space. Facing that is a Waeco slimline 110L compressor fridge built into a decent sized cabinet that has a wardrobe and drawers adjacent to the fridge.

Across the rear, is a multi-use space that has a club lounge below and a drop-down bed above. In this van, that’s a practical and space-saving design that works well. By day, the club lounge forms comfortable seating for two. There are windows on either side, and it would be nice to have a window in the rear wall, but the external fittings make that a bit impractical. Between the seats is a decent sized table mounted on a Nuova Mapa telescopic table leg. It has the dual benefits of being easily adjustable but also quite sturdy. The table can be fully lowered and used to form up an extra bed if needed, an upper and lower bunk so to speak. By night, the drop-down bed can be lowered to a convenient height by simply pushing a switch. Two wall lights on the rear wall give a decent level of illumination

Apart from the under-seat areas, for obvious reasons storage is otherwise limited in the rear area, which is why the nearside bench is a welcome feature. It’s fitted out with three drawers, two floor lockers, a cupboard and two overhead lockers. In addition to some welcome bench top space.

Up front, the kitchen bench would normally be fitted out with both a sink/drainer and at least a cooktop. However, the van has been designed for external living with the slide-out cooktop, so there’s just the sink. For me, I think I’d want the best of both worlds and have small hob inside as well. Under the bench top there’s a cupboard and a couple of drawers. Generally speaking, the available storage in a van that’s relatively small is quite good.

What’s a little surprising about the bathroom is that it looks fairly small from the outside but has enough space for a separate shower cubicle, as well as the expected Thetford cassette toilet and tucked into a corner, a small cabinet with a pedestal wash basin and mirror above. For bathroom ventilation, there’s a small fan in the shower and a window above the loo. There’s a 240V power point located above the wall mirror but it’s set very high

The cool monochrome interior is popular in modern caravans

Certainly, the Raptor is well equipped electrically — a 200Ah lithium LiFePO4 supplies the 12V load and that’s charged up by three 190W solar panels, as well as an Enerdrive 40A charger/40A DC to DC charger.

For my test drive, the Raptor was a well-behaved van behind a Toyota LandCruiser. I suspect, though, if fully laden especially with a boat on the roof, the towing characteristics might change, so careful attention at loading time is certainly recommended. For keen offroad enthusiasts who like to explore along heavily undulated tracks, a short van length like this, especially one with a good departure angle is going to make for easier towing. Choosing a tow vehicle, depends very much on the anticipated load but for a near full payload, a heavy-duty vehicle like a LandCruiser may well be a sensible choice.

Royal Flair offers a three-year warranty on the manufacturer and assembly of its caravan. As usual, that doesn’t cover items like the chassis, brakes and tyres nor any of the fitted components. All those are subject to the respective warranties offered by the individual manufacturers or suppliers. Unlike some other manufacturers who are a little coy about this, Royal Flair does at least spell out the warranty details on its website.

When first viewed, Royal Flair’s Raptor is slightly unusual looking, but it’s been very much designed with a purpose in mind — offroad travel in a relatively small but well-equipped caravan. Size isn’t everything and in this case, offroad travel in a van this length might well be less stressful for both the driver and the tow vehicle.