In the world of Australian built caravans, there are layouts that are very popular, while others are less so and in some cases, this can be for less than obvious reasons. One particular layout in this category is vans that have a rear club lounge. It’s a feature that’s quite popular with our RV friends across the Tasman, but less so here.

I quite like the concept, so when I was considering a review of an Olympic caravan from Sydney Dealer, RV Connection, I opted for Olympic’s Marathon model with a rear club lounge.

Olympic Caravans manufacture a range of models, the smallest being the single axle Sprinter pop-tops, and there’s selection in between, then the Marathon models, which are the flagships with the 22ft 6in Club Lounge and carry the Commodore’s Pendant. 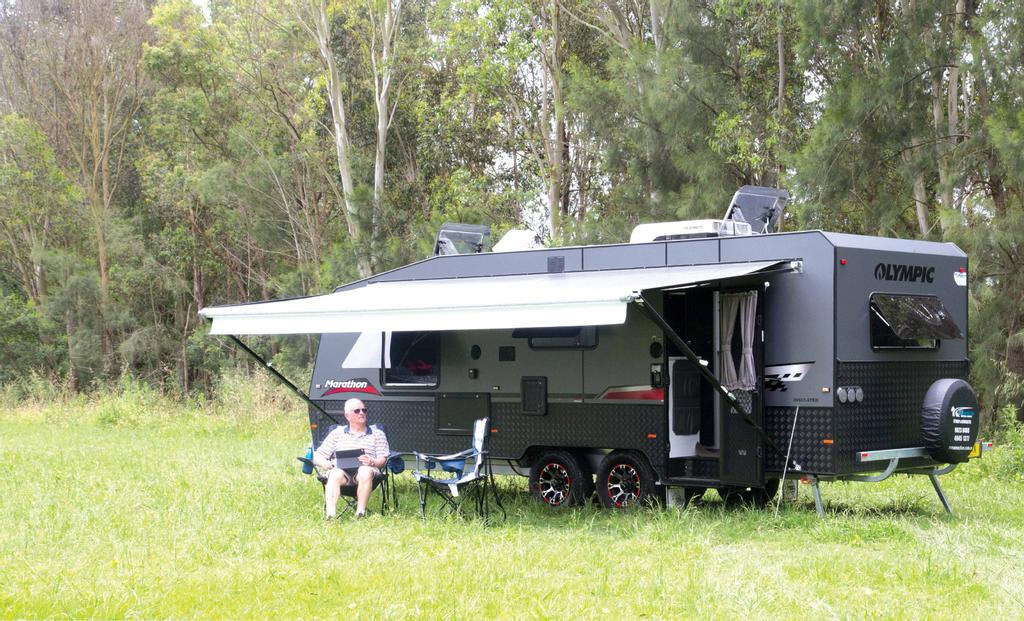 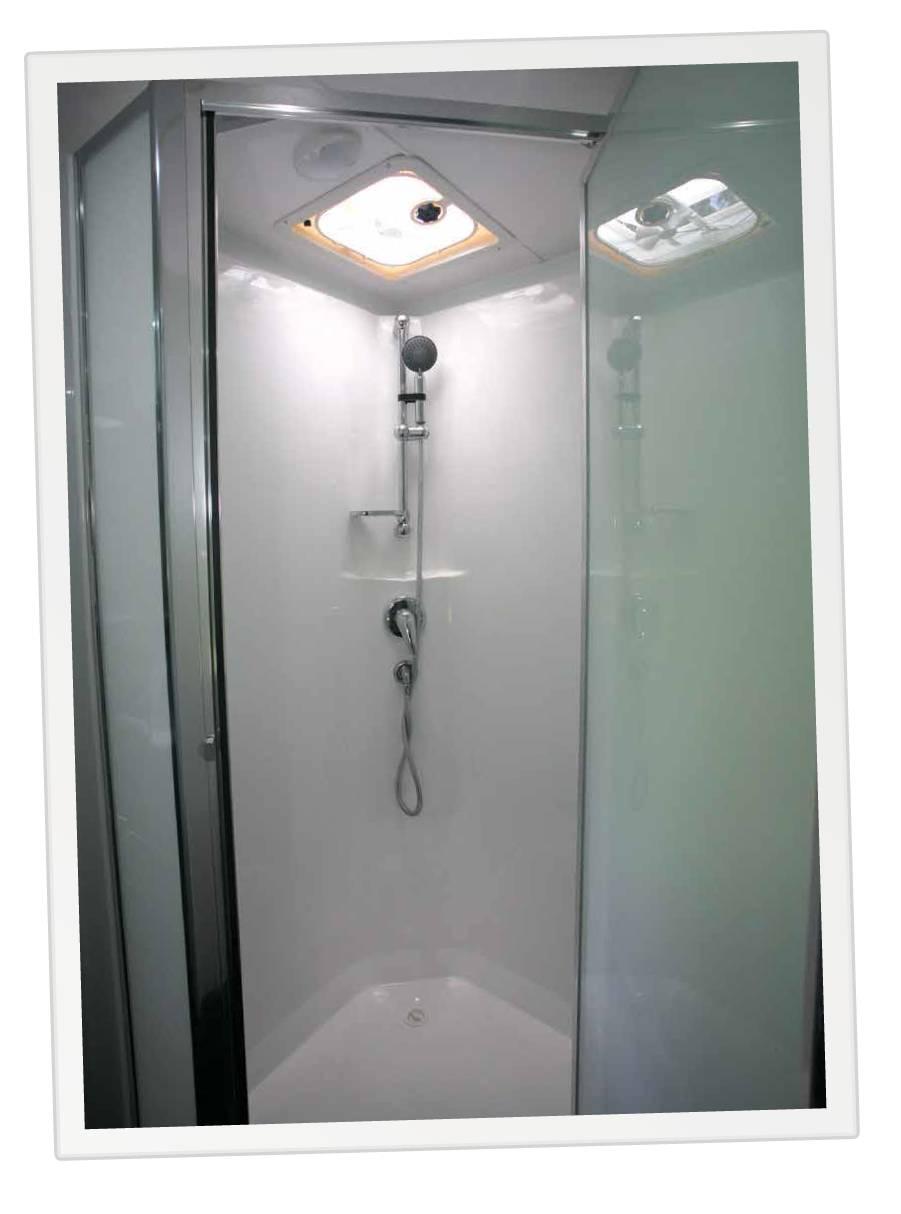 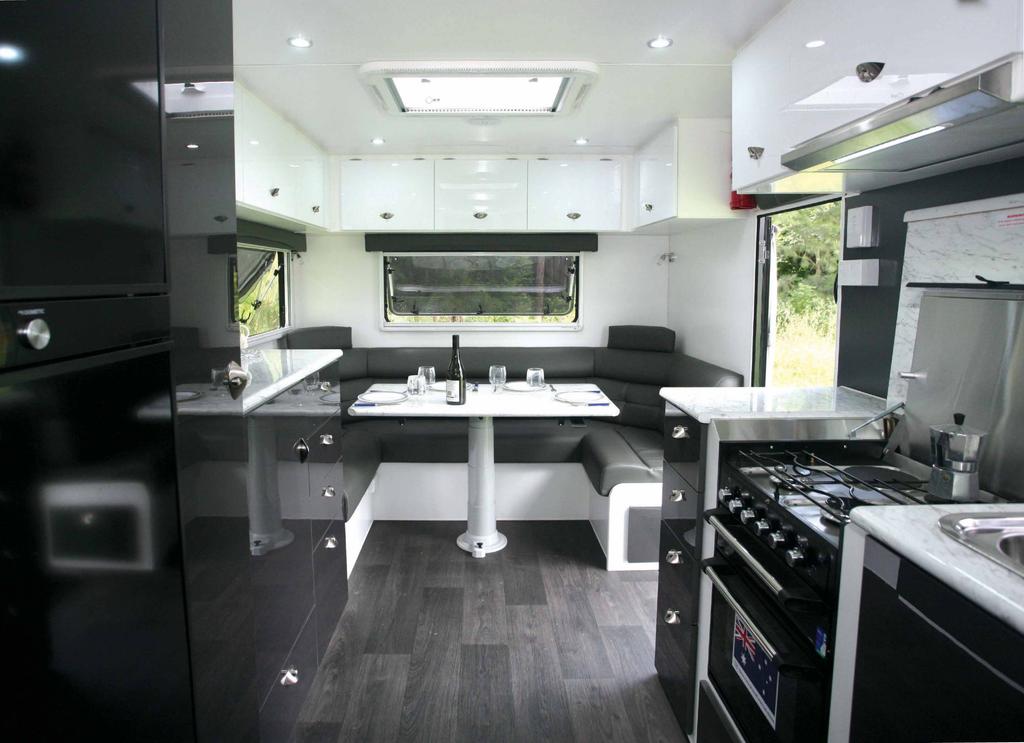 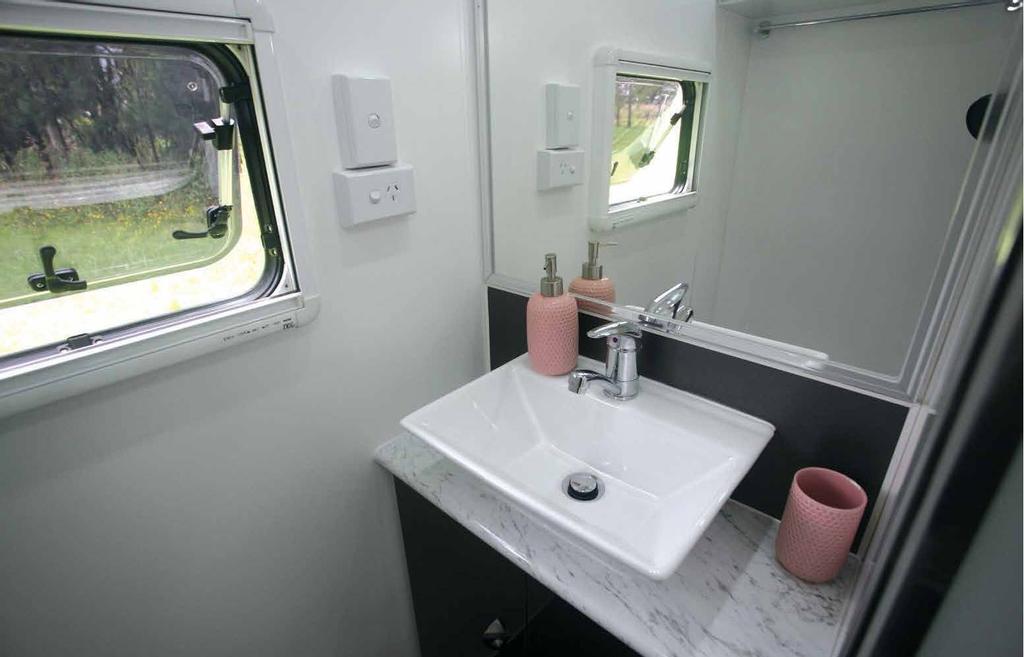 It’s a van that has an external length of 6.86m (22ft 6in) and a tare of 2465kg. The ATM of 2965kg results in a payload of 500kg. Those figures mean a wide selection of tow vehicles can be used, which is a plus for any caravan. For my towing experience, I was using a Toyota LandCruiser 200 Series, which was more than adequate and certainly made for relaxing drive — I make this point because frequently during the time of my tow test, it was raining quite heavily, which is certainly less than desirable and required more than the usual level of concentration, but the towed van came through with flying colours.

Finished in a stylish looking dark grey with contrasting red and silver decals, the Marathon has a Meranti timber frame and aluminium composite cladding — oh, and of course a lower waistline of black alloy checkerplate. The tinted NCE double glazed acrylic windows looked the part, as did the alloy wheels and the raked front wall.

In addition to the awning, the body also sports the usual features like front tunnel storage, picnic table, entertainment unit and external speakers. Evenings spent under the awning are going to be a pleasant experience and when night falls, there are two wall lights and a grab handle light by the entry door.

Roller rocker suspension is used for the tandem axles, a simple but effective way of linking the springs through a ‘rocker’ assembly to ensure load sharing when the ground is very uneven. The alloy wheels are fitted with 10in electric brakes.

Both 95L freshwater tanks are located forward of the axles, leaving space behind for the grey water tank. Including the drain from the grey tank, most of the plumbing and electrics are strapped up safely out of the way. In addition to the usual items, a gas bayonet sits just under the front awning mount.

The club accommodates four and faces the kitchen

A 12V system these days has some essential requirements, and the Marathon Club has all of them — a 100Ah deep cycle battery, 160W of solar capacity and a 15A CTEK mains battery charger are all included. The main electrical controls — 240V circuit breaker, solar charge controller and 12V fuses — are all located in a locker above the kitchen bench.

Black, white and grey give the interior of the Marathon a somewhat monochromatic look but that does seem to be the trend these days. A mostly glossy finish, particularly the white of the overhead lockers and ceiling helps dispel any sensation of a less than sparkling interior. Like most manufacturers, Olympic makes full use very bright but low ener›y LED lighting. Even in daylight it’s obvious when the lights are on.

As mentioned previously, this van has a club lounge in the rear area. When stepping through the habitation door, it’s one of the first things that catches the eye and certainly an invite to sit down and relax whilst checking out the rest of the van. The club lounge overlooks the kitchen area and in the other half of the van an amenities area separates the kitchen from the front bedroom.

One of the attractions of a club lounge, apart from the neatly done upholstery work, is the ability to be comfortably seated and watch the world going by outside at the same time through the rear and offside window. All that’s missing here is a window on the nearside, but there is the door of course.

Designed to accommodate four people, the table is mounted on a Nuova Mapa telescopic table leg which means it can be moved up or down and from side to side as needed. Additionally, the table can be lowered, and the lounge used as a bed for overnight visitors. Reading lights are fitted into both corners and there’s a power point below seat level on the offside. The rear wall overhead lockers are a bit of a stretch but do provide a decent amount of extra storage space. There’s also a drawer under the nearside seat which is handy from both inside the van and from outside the door.

For travelling cordon bleu cooks, split kitchens solve a problem that’s prevalent in many a van — limited food preparation space. In this case, it’s not such an issue and the bench area on both sides is quite generous, as is the drawer, wire basket pantry, cupboard and overhead locker space, although one of the larger cupboards on the offside does contain a front loading 3kg washing machine, but that’s an okay compromise.

Fitted into the nearside bench are the usual accoutrements — four burner cooktop/grill/oven, stainless steel sink and microwave oven. On the opposite side, the Dometic three-way, 188L fridge is mounted off the floor at a user-friendly height.

A concertina curtain separates the bathroom area from the rest of the living area. It’s a split setup with the shower cubicle on the nearside and the toilet facility opposite. There’s a reasonable amount of turn around space in the shower cubicle and an angled door means it’s not too intrusive in the bedroom area. Fitted into the cubicle is a flick mixer tap and a flexible hose outlet.

The toilet cubicle contains a bench style Thetford cassette toilet, as well as a small vanity cabinet complete with cupboard, pedestal wash basin and a wall mirror. Above the loo is a towel rail plus a small overhead locker. It’s not a space hogger from the outside but there’s still room to move inside

An advantage of this layout is that it gives a more private bedroom area, and the slightly confined space feel is nicely offset by the large windows on either side and the decent sized roof hatch above.

The bedroom layout is relatively conventional, the island bed having an innerspring mattress on top of a posture slat bed base. Each bed occupant gets a wardrobe, drawer, a 240V mains power point and USB charger outlets — an almost obligatory requirement these days. Given the level of appointment, I was almost expecting to see pillow cubbies, but they are not provided.

Olympic’s Marathon ticks quite a few boxes. For towing, the van isn’t excessively heavy and will be an easy drive behind a fair range of vehicles. Inside, the club lounge layout offers quite a few practicalities, not to mention comforts — all in a generously spaced interior.