Malcolm Street — 20 February 2022
Italian built caravans are very rare in Australia, but this Long Weekender has much to offer

Over the last decade or so, it’s become the recieved wisdom that the average Australian caravan is now longer and heavier. There are a couple of major reasons for that — one is that because of rising expectations, more and more components have been added to a ‘standard’ caravan, and the other is that vans built for offroad use have become increasingly popular.

Although everyone likes their space and creature comforts, the downside of ever-increasing caravan weights has been the need for matching tow vehicles — that is, ones with substantial maximum towing weights.

There are some local manufacturers who do have smaller caravans in their range lineup, but John Burke from Little Gem Caravans decided to do something a little different. Little Gem is a relatively new company, but Burke is no stranger to the recreational vehicle scene, having been responsible for setting up the superb Explorer range of motorhomes some years ago. I mention this because Explorer motorhomes are built using a fully moulded fibreglass body, which is what attracted Burke to the Wingamm range of caravans. 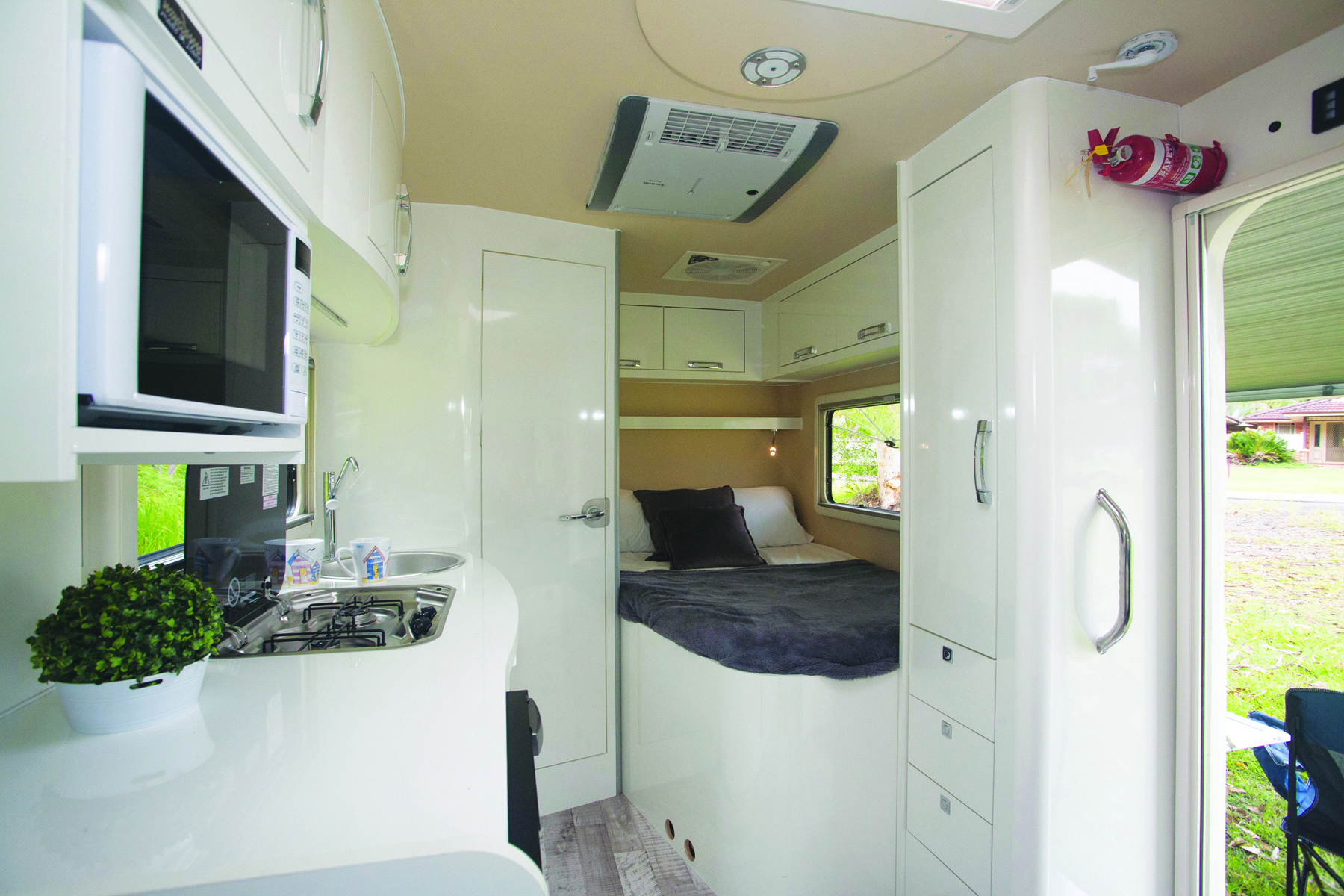 Never heard of Wingamm caravans? Neither had I, although I was aware that Wingamm, an Italian manufacturer, makes a classy range of motorhomes. I’ve now discovered that the manufacturer’s caravans are worth a second look, too. Although there are a few Italian RV manufacturers with a presence in New Zealand, as far as I know, none have made a real effort to do the same in Australia — until now.

Because there are some big hoops to jump through in getting imported RVs into Australia, Little Gem has opted initially to bring just two models into Australia — the 3.75m (12ft 4in,1300kg ATM) Weekender and the slightly longer 4.8m (15ft 9in,1500kg ATM) Long Weekender. As you can see, neither are very heavy towing prospects. They would even be suitable for my around-town vehicle, a Subaru Forester, which has a maximum tow rating of just 1500kg and a GCM of around 3723kg.

The Wingamm caravans imported into Australia aren’t just caravans built for the European market with a few necessary add-ons for Australia. John Burke has done a deal with Wingamm to nab a special production line just for Australian caravans.

For starters, the entire layout is mirrored so that major bugbear of anything European — the ‘wrong side’ habitation door, for example — is on the nearside. All the Australian-spec electrical wiring fittings are sent to Italy for inclusion at the factory. The LP gas work is done here in Australia, as is the fitting of all components that are required to comply with Australian standards. This includes the roof-fitted air conditioner. I’m singling that out because the vans have to be low enough to fit into a shipping container to be sent to Australia. All the local work is done at a factory on the Sunshine Coast.

Ideally, I would’ve liked to use my Forester for this tow test, but it doesn’t have a tow bar because it’s not much use for most of the caravans I get to review. I used a Mazda BT-50 instead, which I have to say was highly overrated towing wise for this particular van. That said, it made towing a breeze because I hardly noticed the van was there. A few times I even checked the mirrors to make sure it was still attached! While the van’s light weight wasn’t a problem, a little more care needs to be taken when crossing driveways and kerbs with large dips and undulations. Rough bush tracks would be a problem, but the van isn’t designed for that sort of travel.

A look under the Long Weekender reveals somewhat less than the usual amount of steelwork associated with a chassis — but that’s mostly because it’s an AL-KO rig with C-section drawbar and main rails. Without getting down on my hands and knees, the only part of the chassis that is really visible is the drawbar. Compared to many Australian vans, the Long Weekender has a relatively light weight, and the chassis is designed to integrate with the floor and the monocoque body. Apart from the 70L grey water tank at the rear, the largest component in the sub chassis area is the AL-KO IRS suspension. AL-KO Octagon shock absorbers are fitted to each 15in wheel, and the brakes are mechanically operated AL-KO overrun, rather than the usual electric. An advantage of the mechanical brakes is that the tow vehicle does not require an electric brake controller to be fitted.

A feature of the streamlined looking bodywork is that it’s all one piece, maximising strength and minimising the risk of water leaks. Structurally, there’s an internal fibreglass shell that is 2mm thick, a mid-section 25mm shell of polyurethane insulation, and an outer shell of 3mm external fibreglass. Out of sight, the floor has honeycomb insulation which has ply timber sheeting on both sides. It’s over 30mm thick and designed for Italian winters but will work equally well during Australian summers!

Some of the external fittings look familiar while others don’t. Starting with the former, the double glazed acrylic Dometic windows are well known, as is the Fiamma awning and the picnic table, but the door — which fits very well — looks like it’s come from an aircraft, as does the plastic moulding for the front boot. That doesn’t open in the traditional way, but instead lifts out at the top initially and then swings up. Once open, it gives easy access to the 4kg gas cylinders stored within. Towards the nearside rear, there’s an external bin for all the camping essentials. It’s actually the under-bed storage area but can easily be used for items like camping chairs, power leads, and water hoses. Part of that same space is taken up by the Truma Combi 4E hot water/space heater.

Although the Long Weekender is a relatively small van, it’s well-equipped electrically. A 110Ah battery is a standard item, as is a portable 200W solar panel and an Anderson plug connection for charging the battery from the tow vehicle or the solar panel. That’s often something only supplied with much larger rigs.

A PLACE FOR EVERYTHING

The European manufacturers are the masters of the effective use of space in any RV, and the interior of the Long Weekender is no exception. It has a mid-wall habitation door and although the van has a relatively small interior space, it doesn’t feel cramped. Across the front of the van is a club style lounge with windows all around. The mid van area is taken up by the kitchen bench on the offside and a wardrobe with drawers below on the nearside. That leaves the rear with an offside bathroom cubicle and a nearside French. I have to say that the interior finish is superbly done — everything from the curved lines of the cabinetry to the glossy white finish on everything that isn’t a wall is quite beautiful to look at. All the LED lighting is sensibly placed and controlled by touch or switching (both, in some cases) and there’s a mixture of reading lights and ceiling fittings. A well-placed marine-style roof hatch offers plenty of natural light and ventilation.

Small caravans don’t necessarily mean really downsized kitchens, and this is certainly a good example of that. It has most of the necessary items — a Dometic two burner cooktop, a stainless steel sink, 90L Vitrifrigo fridge, and a microwave oven. The latter item is an Australian addition, done locally but fitting in quite well and actually set at a user-friendly height. What’s missing is a grill, but that’s typical of many European RVs. Storage facilities come in the form of three drawers, a cupboard, and three overhead lockers with side hinged doors. Handy is the bench space on the left-hand side, which is where both a mains 240V power point and 12V/USB hubs are located.

While not being the full-size bathroom that many are used to, the Long Weekender’s is certainly an adequate size — that is, there’s room to turn around. Fitted in are a full kit shower, Dometic toilet, and small moulded vanity cabinet with wash basin and cupboard. It’s a ‘wet’ bathroom with just a curtain between the shower and everything else, but since the shower is at the rear, it’s possible to use the loo without getting wet feet. A fair size window supplies the necessary ventilation and light and given its height does indeed provide a loo with a view!

Popular in many a small caravan, the so-called French bed (or a corner bed to you and I) doesn’t have quite the advantage of an island bed but it is something of a space saver in a layout like this. Measuring 1.87m x 1.3m (6ft 2in x 4ft 3in), the bed fits neatly in the corner between the bathroom and the wardrobe at the foot of the bed. The wall window nicely eliminates any confined space issues and air circulation, as does the ceiling mounted Fiamma exhaust fan. Overhead lockers are fitted all around above the bed and a handy addition is the shelf, complete with reading lights above the bedhead.

ROOM WITH A VIEW

A very British/European concept is a front lounge/bed, and I reckon it’s works well — it certainly does in this van. With windows all round, it’s an ideal place to sit (during iffy weather in particular) and just watch the world go by. A surprise fitting is the Nuova Mapa table mount, which not only gives a very sturdy table but is easy to lower and raise if the 2.13m x 1300m (7ft x 4ft 3in) lounge is needed as a bed. Two reading lights are fitted to the offside wall, and their respective height makes them better for bed use than when seated.

There are storage areas underneath, but the access is made slightly awkward because there’s a bit of fiddling around with seat cushions and ply hatches. A notable point here is that the ply timber hatches are well out of sight — something that is indicative of what the rest of the van is like.

A little question that’s bound to be asked about this van is whether it’s suitable for ‘Australian conditions.’ That depends very much on how you define the same. Certainly, the van is not going to handle a road trip to Cape York or the Gunbarrel Highway, but it’s not designed for that. I reckon it’s more likely to be suited to many a sealed highway and byway around Australia with far less of an environmental impact than many vans seen trundling around our continent.

I had a bit of fun with this van because it’s certainly very different to the average Australian caravan. Its light weight and relatively small size make for stress-free towing.  The Long Weekender is not a go-anywhere-in-Australia caravan, but it’s not intended to be. Instead, it’s best suited for couples who mostly want to stay on sealed roads and travel in a way that’s relatively environmentally friendly. I reckon it’s also great for solo travellers — particularly people who want the home comforts but not in a large towing package and, finally, anyone who desires bit of chic European design.

“Fairly pricey for a small caravan but you get plenty of bang for your buck, including reduced tow vehicle costs”

“Overall, the fit and finish looks to be quite good and the Italian styling is something to appreciate”

“Being only 4.8m (15ft 9in) long the interior is fairly compact but fully equipped”

“Three-year warranty on the body work, other components as per individual manufacturers”