John Hughes — 10 December 2021
You can’t be any clearer about the intended purpose of a vehicle when you have sizeable decals on all four sides of the van spruiking ‘Dirt Roader’.

Perusing the JB website provides great insight into the design intent of the Dirt Roader featured in this review. It is pitched as a “semi–offroad van perfect for tackling light corrugations easily and in style”. Sitting above that, JB have the Dirt Road Xtreme aimed at “travelling off the beaten track, deep within the outback of Australia”. Making this distinction will help sharpen our focus on what should be expected of the Dirt Roader. We are looking at the 22ft variant in a family van which is one of the larger models in this range.

I am starting with the running gear as it is a very good indicator of the ‘dirt roadworthiness’ of the vehicle. The setup is a great example of how AL-KO combined with its affiliates are in the unique position to provide just about the complete undercarriage package. 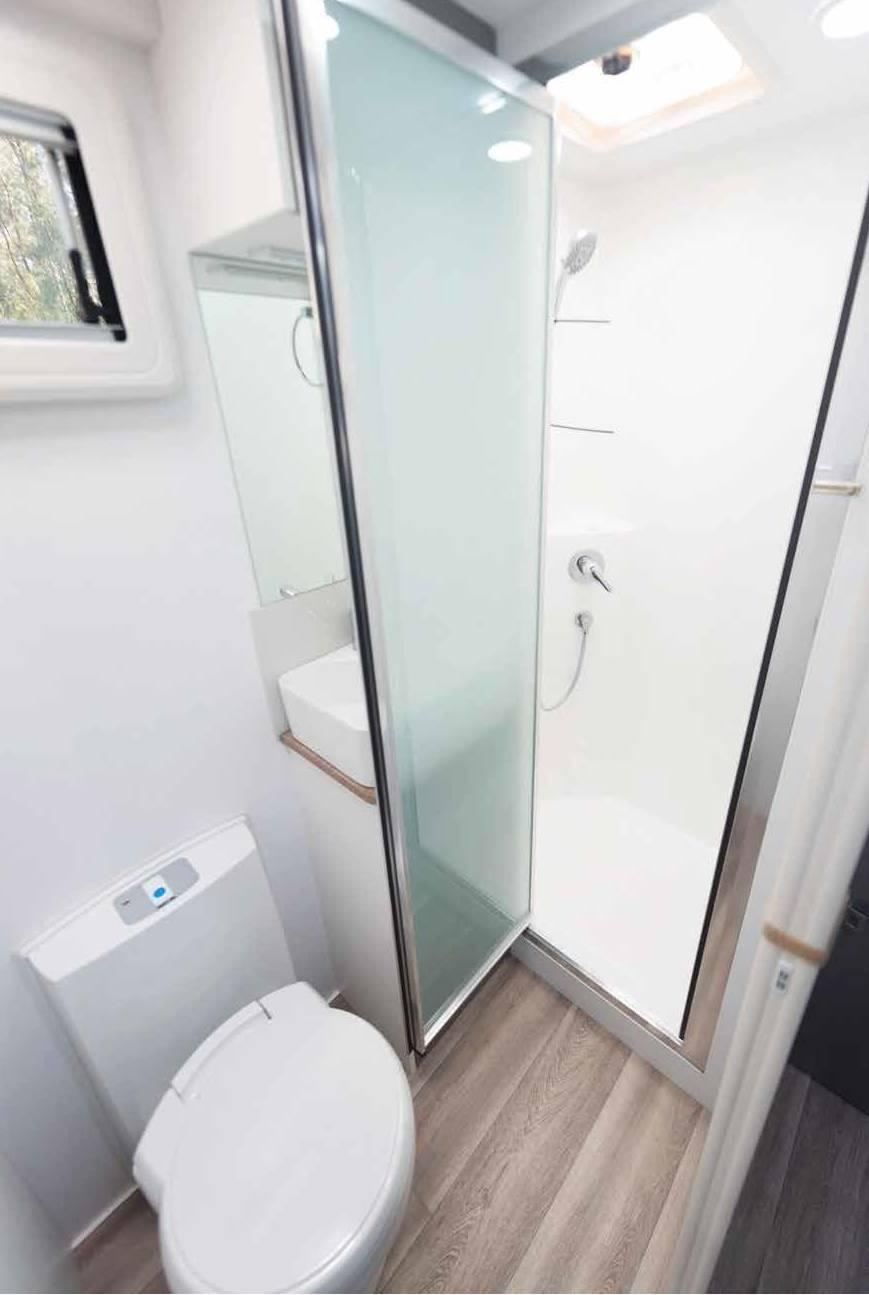 Starting at the front, the AL-KO Offroad ball coupling incorporates significant vertical and horizontal articulation. It also has the advantage of running a standard 50mm towball as opposed to a specialised pin used by many other multi axis articulation couplings. Next to that is the AL-KO park brake and standard jockey wheel which are well proven.

This hardware is attached to a G&S A-frame/ chassis. AL-KO’s parent company acquired G&S Chassis in 2018 when they identified the need to have a stronger presence in the Australian chassis market. (AL-KO branded chassis have a much stronger presence in Europe, but historically their designs for much lighter vans have had limited take up in Australia.) The G&S chassis has a 150mm A-frame and chassis with a 50mm raiser kit, all finished with supagal coating.

The independent suspension is the AL-KO Enduro Cross Country version fitted with twin shocks and coil springs. AL-KO classify the Cross Country as suited to bitumen and graded dirt roads. The package is completed with offroad electric drum brakes combined with AL-KO ESC which have stood the test of time.

Just about the only running gear components not supplied by the AL-KO family are the BMPRO brake safe and some smart looking alloy rims sporting 15in tyres with ‘AT — Terrain’ emblazoned on them. I haven’t had much experience with these but chatting to my Caravan World colleagues, these tyres are considered to be a relatively inexpensive but good performing ‘factory’ tyre.

Having run through all of the running gear it is safe to say that all the components meet or exceed the design intent of the Dirt Roader.

A final point on running gear. Talking to the guys at JB and AL-KO, Tow Assist™ will be available on 2022 models. It’s unusual to talk about a feature that was not on the van, but I believe it is an extremely important consideration in a new van purchase. Tow Assist™ has been brought to market by ALKO with much of the product development conducted by Bosch. The system has four key features: ABS brakes provide optimum stopping performance without skidding; sway mitigation detects swinging motions of the van and applies an opposite braking force to stabilise it; lane change control detects when your van is swerving and controls each wheel individually to help stabilise the van; and an odometer is built into the systems accessible via a Bluetooth® app.

I like the styling with the bright orange decals lifting the presence of the otherwise predominantly black and grey cladding. Much of the surfaces are clad in checkerplate which has largely become the industry standard for this style of van but still a tick for the Dirt Roader.

A ‘half width’ toolbox provides some sealed exterior storage. This enables the gas bottles to be mounted as far back as possible which minimises load on the extremity of the A-frame. Hidden below the toolbox and gas bottles is a shallow mesh tray for storing items such as grey water hoses. I think the idea is good but accessing the space is limited due to quite a narrow opening.

The Dirt Roader has a regulation tunnel boot except I noticed there were no hanging hooks for the stabiliser winder. Stone protection is limited to a guard for the A-frame mounted water tap and shielding for the three water tanks. Apart from that, there is a lot of exposed plumbing under the van. When you take into account the design intent, I figure this is acceptable. If you want to add stone protection it is a relatively simple and inexpensive exercise, and we have a how to article on this subject in Issue 617 of Caravan World.

Going back to the water tanks, the two tanks forward of the axles are tucked up as high as possible for optimal ground clearance. The configuration of the chassis means that the grey water tank to the rear of the axles sits somewhat lower, marginally impacting on ground clearance. Again, given the design intent, it is not a big deal but in a perfect world, you would change it.

As much as I like the exterior, I like the interior more. Many traditionally built Australian vans tend not to have a front window above the bed because it makes sealing the front of the van a lot easier. Many European style vans have big front windows to let in plenty of light and make the van feel roomy. JB have struck the best of both worlds with very large windows on either side of the main bed. Not only does it provide great light, it offers a more user friendly view looking out the sides of the bed rather than out behind you.

The timber finish on all furniture horizontal surfaces and the floor has a warm welcoming feel for me and worked in nicely with the greys of the furniture doors. The dining area incorporates stylishly stitched upholstery and due to the length of the van, there is enough room to accommodate seating which you will need for five people.

It is always a battle to fit three bunks into the height of a van, but this setup is as good as any I have seen. The little sleeping pods have just what the kids need — useful storage pockets, reading lamps and USB charging points. Some would like to see a privacy curtain, but this could be easily added as an option.

A primary goal of any designer is to maximise storage space, and this has been executed very well. The main bed area features wardrobes on either side including hanging space and a deep well. Below that are bedside drawers with a nice little horizontal surface for phones etc, with USB points in the perfect location for charging. At the foot of the bed in each corner is more useful storage. It makes it a little harder to negotiate around the bed, but it is worth it. Overhead storage is abundant and further handy storage is available under the bed, made easily accessible with lift up gas struts.

Moving into the kitchen area, I like the little slide out pantry rack. In reality, it probably halves the available space but gaining access to the contents is a lot easier because you don’t have all the contents piled on top of one another. If you want to cook inside, you have the Mobicool unit with three gas and one electric hot plates plus a grill and oven. The NCE 28L microwave is also at the ready for some quick heating. Kitchen appliances are completed with a 175L 3-way tropical Thetford fridge.

The bathroom features a separate shower and toilet. The shower has nice big fibreglass panels with very few joins and an anti-slip surface on the bottom. Given that it is a family van, I would have liked to have seen a higher side on the front of the shower to act as a small bath.

The NCE top load washing machine hidden in the rear cabinet provides much cleaner lines than wall hung units, but the exposed male brass fitting inside the cabinet is a bit agricultural. There are no complaints with the upper cabinet with ample shelving for towels and linen.

A good-sized stainless steel sink; There is plenty of storage space around the main bed

The Dirt Roader doesn’t have fancy features like inverters or banks of lithium batteries. It does, however, provide what we would now consider the basics in the form of a 180W solar panel, a 135Ah AGM battery, two 9kg gas bottles, two 95L freshwater tanks and a 95L grey water tank. I can tell you on many occasions I have toured very happily with my kids all over the country, including remote locations with less resources on board than this.

The JB website states they offer a five year warranty on structural, plumbing and electrical, which is pretty impressive. The website also states that all warranties related to appliances and suspension are to be raised directly with the manufacturer. This could, in some instances, speed things up as it cuts out an intermediary. While this is not unusual in the industry, I don’t see it as best practice when the caravan manufacturer/ dealer is not the first point of contact for the consumer.

I had the opportunity to tow the Dirt Roader through some notorious winding and very steep mountain roads with a 2019 Ford Ranger. The van and ute hugged the tight stuff remarkably well. In the very steepest of hills, the Ranger did feel the weight of the van and a fair bit of encouragement on the right pedal was required. Despite this, the fuel gauge didn’t complain much and the regular steep sections (up and down) and flats were all effortless.

Having said this, the Ranger used was not a practical real world solution for the van. Whilst our towing was legal because both the tow vehicle and towed vehicle were more or less empty, if we had filled both the ute and van to 75 per cent of their respective allowable payloads, we would have just exceeded the gross combined mass specified by the car manufacturer. This should not deter your interest in the van but rather sharpen your attention to researching a suitable tow vehicle.

You will need an appropriate tow vehicle

JB calls this van the Dirt Roader and I believe with the components they have chosen throughout, it will perform this job very capably. Throw in three bunks and you increase the demand for storage and general liveable space. Capitalising on its decent size, the Dirt Roader design is up to the challenge with a very workable layout and intelligent storage. While not its strongest point, the Dirt Roader is adequately off-grid equipped for a few days away from the caravan park. Overall, this is a great package for a family to hit the road and enjoy much of what Australia has to offer.

Wheels 15in alloy rims with all terrain tyres