Tim van Duyl — 10 November 2021
Highline, like others, is seeing huge interest in capable but affordable family vans for a new and booming market, and their Cobba fits the bill

Cobba, what a fun name, and it’s one that fits the nature of the company that built it, Highline Caravans, well. Based out of Campbellfield, Victoria, Highline is a small family run business that specialise in affordable, semi-custom builds of common layouts and styles, predominantly for offroad. Our review van layout is a traditional centre-front entrance with north-south main bed, centre kitchen and rear ensuite and bunks. It has good amenities, decent off-grid capacity and intriguing looks.

The Cobba is a family van built to take a small tribe for a week or so in decent comfort with national parks and some off-grid nights on offer. It is affordable and built with locally sourced key components like the Road King Chassis and Oz Trekker suspension, where we’ll start our review. 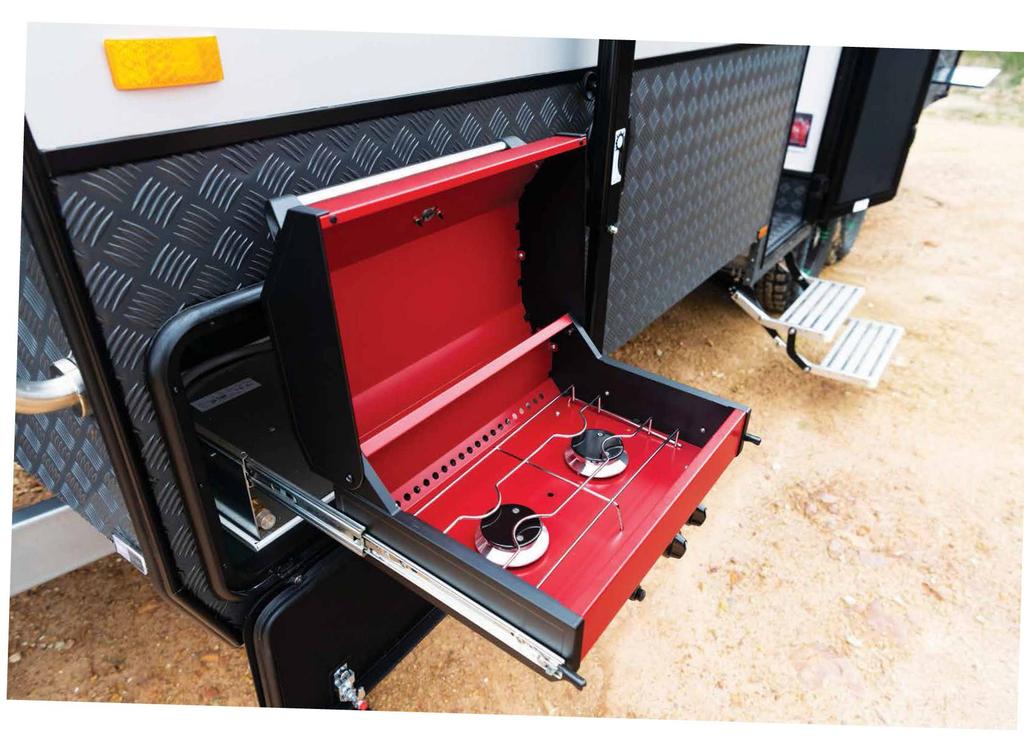 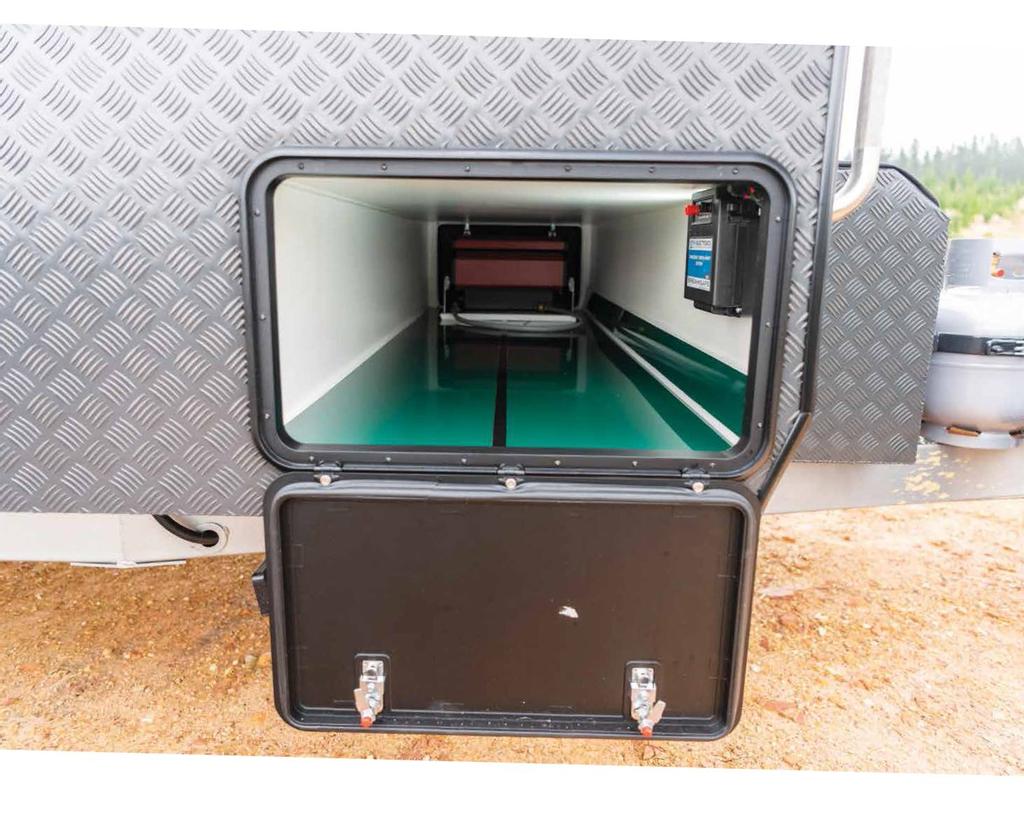 Starting at ground level, the Cobba sits on Mud Terrain tyres from Federal, a well-known brand that you'll find spares of more easily than a lot of no-name brands doing the rounds. These are wrapped around good looking alloys that are colour matched to the body.

Between the Road Runner chassis and suspension are 12in electric drum brakes. The suspension is Road Runner’s own design, dubbed Oz Trekker. It features a good number of thick box-section cross members that, in the case of our van, were painted green to match the theme. These bolt to a 6in DuraGal chassis that runs full-length. Suspended from the chassis are twin battery boxes housing 100Ah AGM batteries, twin 95L water tanks, whose shielding left a lot to be desired, and a 95L grey-water tank. At the front of the chassis, a good sized tool box is found as well as a tap, twin 9kg gas bottles holders and DO35 hitch and at the rear, a pair of jerry can holders. Perched on top of the chassis is a frame made of Meranti wrapped with composite cladding and lastly, up on the roof are a pair of 190W solar panels, a digital antenna for the 24in TV and a Gree AC unit.

Everyone likes a stickybeak, so here is what your neighbours at the caravan park will see from the outside. Firstly, and most obviously, it is green and that’s not common, but it works for me. With the silver sides, the green feels modern, but you can have one more sedate colour like silver, white or bronze. Then there are the graphics which add to the wow factor of the green on the wheels and ends. You’ll notice it has a good amount of stone and branch protection on the lower sides by way of checkerplate alloy but from there it is fairly typical in the sense that it is a centre-front door, so you know the main bed is at the front and the kitchen is behind the wide centre window. A little less obvious are the windows for the bunks on the far side — our Cobba was a twin-bunk with a window for each.

Behind the hatches are what you’d expect — some good external storage and access to things like the cassette toilet and external hot-water shower but one little detail took me by surprise. In the tunnel boot, I expected either full width storage or an external kitchen, but I found a small slide-out BBQ. At first I dismissed the idea thinking why waste the full-length space with a small BBQ? It should be a full-kitchen or nothing, but then it dawned on me. It takes up little room but gets the smell of frying food out of the van itself, something I hate to sleep in. To round it out, there is the requisite full-length awning, external LEDs including one well-placed over the BBQ, speakers, mount for the TV as well as a 240V outlet and on the top rear of the van is the great addition of a Safety Dave camera.

Should you be lucky enough to get the invite inside, you’re met with a dark laminate on the floor which works well to contrast the white walls and off-white cabinetry. The lounge is a plush leatherette and will seat four in excellent comfort, or maybe six at a pinch. I noticed the dinette converted to an extra bed and as the seat padding was so comfortable, I tried it out as a daybed. Although not made for a full-size adult, I can see it working well for a toddler not yet ready to stay in the bunks.

The north-south queen has a pillow topper on its innerspring design and was comfortable to say the least. To its sides are robes and cupboards for personal items as well charging points for phones etc. Opposite the dinette is a good kitchen. The stove is by Swift, a 600 Series, with three gas and one electric hobs, a grill and small oven. The fridge is by Thetford, and is a three-way that sits inside the magic triangle with the sink and stove well. Although becoming common in caravans, I still really like to see a wire rack drawer that some would call a spice drawer like we found below the sink in the Cobba. For me it's the perfect place to house the most commonly used items like olive oil, S&P, coffee and tea, UHT milk and some key utensils.

Overhead cupboards are found over the kitchen and dinette, all of which are soft-close but use button-type latches that can be a burden to anyone with bad knuckles. Underneath the bed, lounge and bench is more storage — there is a lot here. At the rear is the ensuite which features a separate shower and toilet doored off from the twin bunks between which is a modern front-load washer and linen cupboard. It is a tried and true layout that really works.

The team at Highline take self-sufficiency quite seriously, though this Cobba is probably a bit more typical in its set up than some of their high-end rigs I’ve seen. There is 180L combined of fresh water, a 95L grey water tank, 200Ah of combined AGM battery, 380W of solar, a gas and mains hot water service with holding tank and twin 9L gas bottles. The solar and Anderson plug charging is taken care of by a Projecta Intelli-RV BMS with a display to keep you informed of the state of charge which can also be used to monitor the tanks.

Taking it all in, if you run the fridge on gas and limit showers there is a good deal of off-grid capacity — unless you add on an Inverter, you’ll run out of water before gas and power. So at ten litres per person per day for a family of four, you should see four to five days. Ration it a bit more or use the jerry spots for more water and a week is a real possibility. I’d venture to say that is more than enough for more touring families.

We towed the Cobba with one of 2020’s most popular vehicles, the Isuzu D-MAX. Keen readers will know that we use Isuzu utes and SUV’s a lot in our shoots — we are lucky enough and they are kind enough to give us the keys to the local press fleet on occasion. But there was something a bit different to this one, as it wasn’t a top-spec variant like we typically see.

Two solar panels are mounted on the roof

The D-MAX seen here in Tradie White (actually known as Mineral White) is the LS-M, targeted at fleet and more cash-conscious buyers (that’s not to say the top-spec variants are overly expensive, this model is just cheaper). It does without a few things, the most obvious of which are side steps and carpet, and the infotainment screen is smaller in size. It retains the safety tech and five-star ANCAP rating that set the new benchmark for utes as well as the venerable 3L turbodiesel and six-speed gearbox everyone seems to love, but it is cheaper, and how much so?

Driveaway prices sit at around $60,000 for an automatic gearbox equipped LS-M and about $57,000 for a manual. Compared to the top-spec X-Terrain, that represents about a $11,000 saving. Yes, you get a hell of a lot more than just a set of steps and carpet in the X-Terrain but for someone looking to rationalize and save a bit, it is worth looking at both side-by-side as the LS-M will tow 3500kg, has a GCM of 5950kg and a payload of over a tonne so on paper, it is a match for most of our weightiest caravans.

I would choose the auto not just because I am lazy but because in this model, automatic downshifting when going down a hill has been added and it works. When descending, with your foot off the accelerator or in cruise control, the auto will downshift to give you some meaningful engine braking.

So, how did it tow? Just like expected, fuss-free, and fairly economical. Our shoot location was about 120km north of Melbourne City. It is specifically chosen as it has dirt tracks, a few washouts and a slog up the M1 to test economy and how the van handles trucks, traffic and cross-winds.

We saw around 15-17L per 100km towed (this is for up and back) averaged between 85 per cent on-road driving and 15 off. For towing feel and performance of the caravan, the Cobba was a star.

The Road Runner chassis and Oz Trekker suspension combo was faultless. Having a good look at it, it looks like a good design with long arms and decent if not great adjustability in the bushes for alignment sake. We encountered no sway and no funny business with the Cobba. You knew it was there but no more than any other tall, full-bodied vans of its weight.

The price you’ll sign for the Cobba as-seen is $87,000 plus shipping (if any). Is that a good deal? I’ve seen more basic vans for more and some better deals so let’s say it is on par with similar sized builders with similar offers like Leader, Great Aussie Explorer and Kokoda. If you think that is an issue, I think you’re wrong. Living in a world with this much choice is powerful. You decide who you want to invest with based on a lot of choices. Does that mean you can haggle? I’d suggest not, as Highline, like most, is booked out for months (some more like a year) as this style of van is very popular right now with young families joining the ranks of seasoned tourers exploring the outback.

The bottom line is that Cobba offers a way into caravanning. It is not a ground breaker in its layout, fit out or pricing, but it is solid and in a time where demand is outstripping supply, we consumers can do well to talk to the many builders to find one the one we trust and want to work with as they’re still fighting for your support and dollars, clearly, as there is so much competition in offroad bunk vans.