Michael Browning — 8 November 2021
Could this be the ultimate tow tug?

Much has been written about Land Rover’s all-new Defender, most of it good, but how does it stack up as an all-terrain tow vehicle?

That’s an important question for many people who have invested their deferred overseas holiday money in a well-equipped offroad caravan and now need a comfortable and capable vehicle to tow it to destinations unknown. 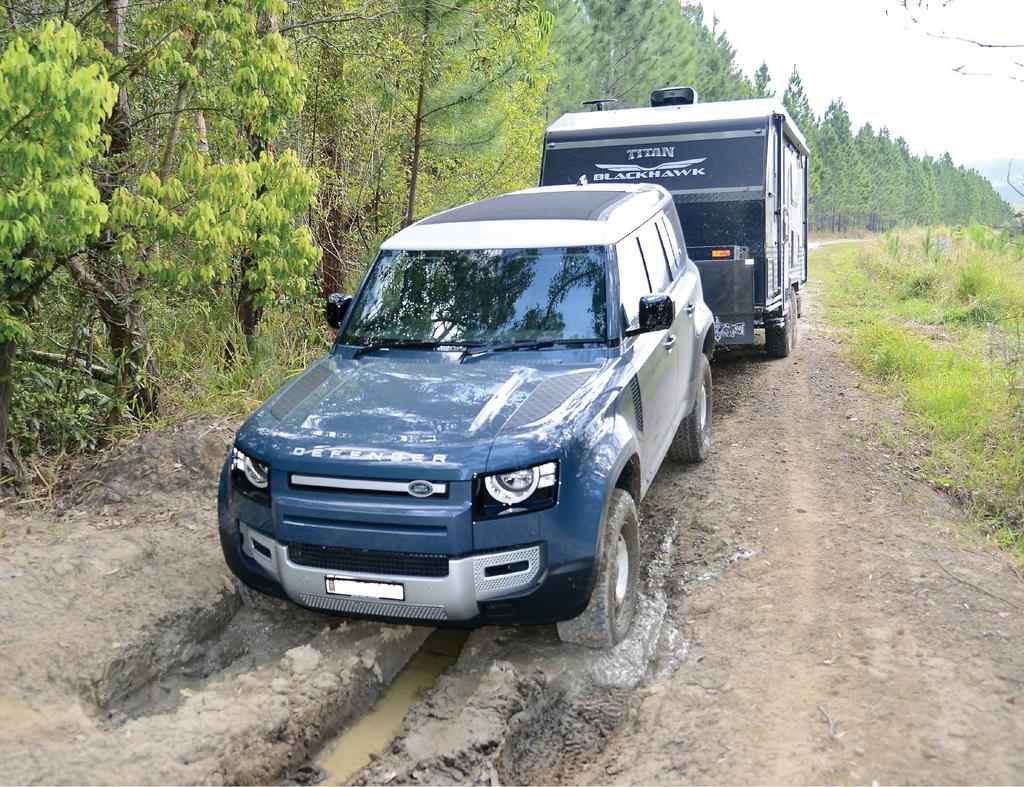 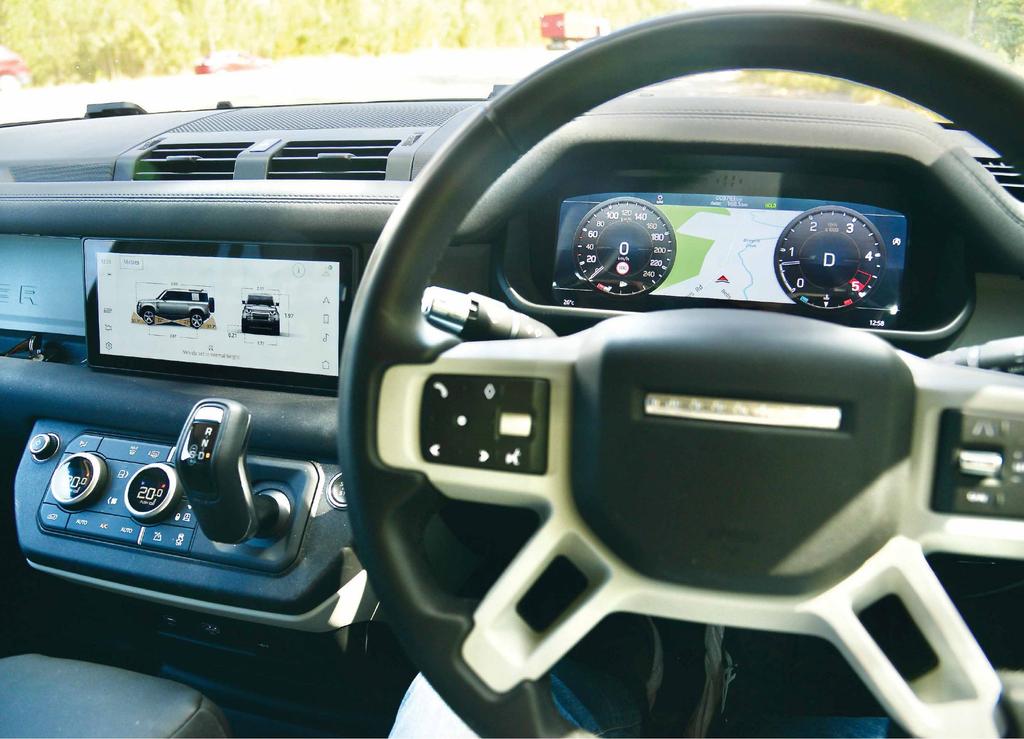 While the Defender 110 P400, with its 3L twin turbocharger petrol engine, is still the real powerhouse of the engine range, most people with heavy offroad caravans cruise at 95-100km/h. So, along with its elevated price, the P400’s 294kW is perhaps a bit overkill. The more powerful and thirstier petrol engine also results in a poorer towing fuel consumption, delivering a relatively small travelling range of less than 500km from its modest 89L fuel tank

As for the forthcoming P525, 5L V8 petrol engine model producing a prodigious 386kW/625Nm, forget it. That’s strictly for urban warriors with jetskis in tow.

On the other hand, the entry level 3L six-cylinder twin turbodiesel engine available for the Defender 110 that develops a very acceptable 183kW at 4000rpm and, more importantly, 570Nm of torque from a very useful 1245-2250rpm, is a better proposition for a tow tug. Adding to its appeal, its standard 8-speed automatic transmission and two-speed high/low range transfer case and standard Terrain Response never finds you wanting an appropriate gear or better traction.

The D250 S lists at a starting price of $91,220, plus options, which are plentiful and tempting. There is a more powerful 220kW D300 six-cylinder diesel engine available for Defender 110 models in SE equipment spec will cost you about $5,400 more, but it is a little thirstier, meaning a smaller touring range. But do you really need the extra grunt?

For my money, the D250 S is the sweet spot in the range for all-terrain, stress-free towing. And having travelled long distances hauling big vans with all its key rivals — from American RAMs and Silverados to the most powerful Toyota LandCruisers and Nissan Patrol models — I was interested to see how the Ingenium six-cylinder diesel stacked up, also taking into account all-terrain comfort and manoeuvrability when not on towing duty.

It’s interesting how the new Defender shares these important ‘off-duty’ qualities with my 13-year-old 200,000km Discovery 3 TDV6 SE, whose equivalent dimensions are in brackets.

Where it exceeds the capabilities of the D3 starts with its exceptional ground clearance, starting at 227mm and rising to a monstrous 291mm at the full height setting of the optional air suspension. You will hardly ever need to use this setting except in really rocky going, while the Defender’s resulting 27.98-degree ramp-over angle stops most things from tickling its belly.

With its wheels firmly at each corner, the 40-degree rear departure angle, enhanced on the Defender by having the full-sized spare wheel hanging off the back door (rather than underneath as on Discovery models), combined with a front approach angle of 37.5 degrees, have no equal amongst unmodified production 4WDs.

For these reasons alone, not to mention its formidable Terrain Response system that modifies engine response to suit sandy, muddy, rocky, icy or other road conditions, it's a safe bet that the Defender will get you closer to that stunning remote camping place you’ve dreamt of than anything else short of a large truck-based adventure vehicle — and with less damage to the habitat.

If there has ever been a SUV factory-built for towing, this is it. Other than the suspension, it includes the vehicle’s standard multi-view 3D surround camera system, which allows you to view exactly where the Defender sits in relation to its surroundings, with separate rear, side, forward and ‘Birdseye’ views — all of which can be seen via the vehicle’s central 10in info screen.

Its direct coupling view makes hitching up a cinch and once you’ve entered the type and dimensions of what you’re towing, various warning lights and alarms will inform you, like a cat’s whiskers, whether you and your trailer will fit.

Having gone to all this trouble, it seems strange that Land Rover stopped short of equipping the Defender with an electronic brake controller (EBC), although the test Defender was dealer-fitted with an excellent after-market Redarc Towpro Elite.

And I know the cameras imbedded in the large exterior wind mirrors create wiring complications, but why wouldn’t Land Rover incorporate electric extensions for these wing mirrors? Given the Defender’s commendably slim hips which are great for tight bush tracks, the standard mirrors don't quite give you the view down the side of a typical touring caravan that most state regulations require.

The internal rear vision mirror offers a 180-degree rear view, but this is academic when you have a caravan like the Titan in tow.

Of course, you can use the central display to see just where you are in relation to road furniture and other vehicles, but glancing at the centre of the dashboard when towing is very distracting, particularly when you have up to 3.5 tonnes of RV behind you. If a heads-up display was standard on the Defender’s tow pack, instead of optional, giving us those camera views in our direct line of sight, things would be different.

On the positive side, these various manoeuvring aids are presented in crystal sharp colour resolution.

The Defender’s abundant torque of 570Nm available from low engine revs is ideal for hauling a large offroad caravan. You’ll never get angry ‘toots’ at the lights and while easily keeping up with other traffic, we never felt that we needed more power.

Once on a freeway, the D250 quickly reaches 100km/h and can easily cruise sway-free at higher speeds where State limits allow.

Torque of 570Nm is great for towing

We played with different height coupling shanks to ensure that the Blackhawk 595 Touring van in tow was near level with a slight forward rake before setting off and the D250 S’s optional self-levelling air suspension ensured that this remained unchanged, regardless of the sealed or unsealed terrain.

This applied unless we chose to raise its offroad height via the steering wheel controls to clear obstacles like tree stumps, or traverse deep drainage channels. Here, the Defender’s chunky dimensions, really paid dividends and a diligent offroad driver should never drag the caravan’s A-frame or hitch once the rig is set up properly.

Land Rover says the Defender’s monocoque body-frame is now three times stronger and three times stiffer than traditional body-on-frame set-ups, as well as being lighter than the Discovery, and this gives extra confidence to take roads less travelled if you have a robust caravan.

Of course, many Defenders will only perform city commuting and school duties because of their cool, on-trend looks.

This could work against the Land Rover were it not for the comfort of the Defender’s ride, coupled with its roomy and well-equipped cabin.

As standard, the Defender D250 gets a stack of gear including LED headlights, heated, electric, power-fold door mirrors, approach lights and auto-dimming, keyless entry, cabin walk-through, an auto-dimming interior rear view mirror, carpet mats and fabric, Along with the 10in touchscreen Pivi Pro system, there’s also a smartphone pack (with Apple CarPlay and Android Auto), DAB radio, satnav, an online pack with a data plan and a 180W six-speaker sound system. So it can be as fully loaded as a luxury sedan.

The in-line six-cylinder Ingenium engine is exceptionably quiet for a diesel — particularly when inside, where you have often have to look at the rev counter to be sure the engine is running. Its torque curve is very flat throughout the rev range, with the turbos working sequentially to eliminate lag almost completely.

At the other end of its allowable rev range, it delivers a very aural ‘howl’ but if you hear this you are probably revving it much harder than you need to, as there are rarely any circumstances, except in deep sand, where anything above 3000rpm is required.

The difference in ride comfort was also barely discernible whether the caravan was hitched or not, thanks to its air suspension, with bumps rarely deflecting the 2415kg Defender from its course, with much less feedback through its power-assisted steering than on my D3.

As with the D3, the Defender’s Terrain Response allows for the engine mapping to be set for a wide range of offroad surfaces, but given the massive ground clearance, most urban owners will be happy to set it in ’Auto’ and let the computer choose the best settings for the conditions.

On an everyday practical level, the Defender’s side-hinged rear ‘barn’ door is set high enough to clear the Blackhawk’s standard DO35 offroad coupling, allowing full access to its cargo area that is thoughtfully lined with hard and sturdy plastic checkerplate anti-scuff material.

While we are yet to put Toyota’s upcoming 300 Series LandCruiser to a comparative tow test, there are two areas where the Defender will never match its key Japanese rival — fuel range and service representation.

Fuel tank capacity of the D250 is just 89 litres, which at our average towing fuel consumption of 15.9L/100km in mainly flat terrain, means a safe touring range of around 500km between refills. A LandCruiser with its large main and separate sub tank could give you nearly double that.

While appreciating that Land Rover could not accommodate a larger tank within its modest architecture, a jerry can holder would have been a nice external feature — original Defenders had them.

Service and support are another area the Defender can’t match its Toyota rival. While the latest ‘Cruiser is too sophisticated for most remote Toyota service dealers to touch, they are there to give support and encouragement. Land Rover, by comparison, has squandered the heritage that made it Australia’s favourite 4WD in the immediate post-war years in favour of the more profitable leisure market it targets today.

Price is the Defender’s final stumbling point. The basic price of our Defender D250 S was $91,220, but a long list of optional equipment, that included a snug canvas folding sun roof ($4810), a front jump seat that converted the D250 S into a six seater ($1853) a tow hitch receiver ($1432 — should be standard), the Air Suspension pack ($1309 — well worth it), the Clear sight interior rear vision mirror ($1274), an Electronic Active Differential with Torque Vectoring by Braking ($806) and no extra cost optional white-painted 18-inch steel road wheels with 255/70-18 offroad rubber (much easier to repair and clean), took its RRP to $111,860 plus on-road costs as tested.

Specify the D300 with the X pack and some of these things are standard.

Would I buy one? Well, at a price difference close to $80,000 over my existing D3, probably not. But if it was to be my only 4WD and I planned some serious remote area caravanning, I couldn’t think of anything better.