Luxury model caravans are often aimed at the grey nomad or offroad sector of the RV market, but there are several manufacturers which offer more than a basic van for families looking for a bit of classier RV travel.

Essential Caravans happens to be one of those manufacturers. Essential introduced its C-Class range to the market earlier this year, amongst which were a number of family layouts of varying lengths. Gosford, NSW-based Alan Graham’s Caravans and RVs had a 6.65m (21ft 10in) model in stock and when I arrived at the dealer on the appointed day, the van was hitched up ready to go.

My plan for the day was to head up the Mangrove Mountain area where I had a couple of photo locations in mind, one of which was near a place where I could get a decent bit of lunch. Unfortunately, when I arrived at my chosen location, the local council had been on a recent beautification program and there were large chunks of sandstone blocking access to the best spots, a not unknown problem for us photographers in recent years. To add insult to injury, my lunch source had closed at some point since the last time I had visited. So much for the day’s plan. 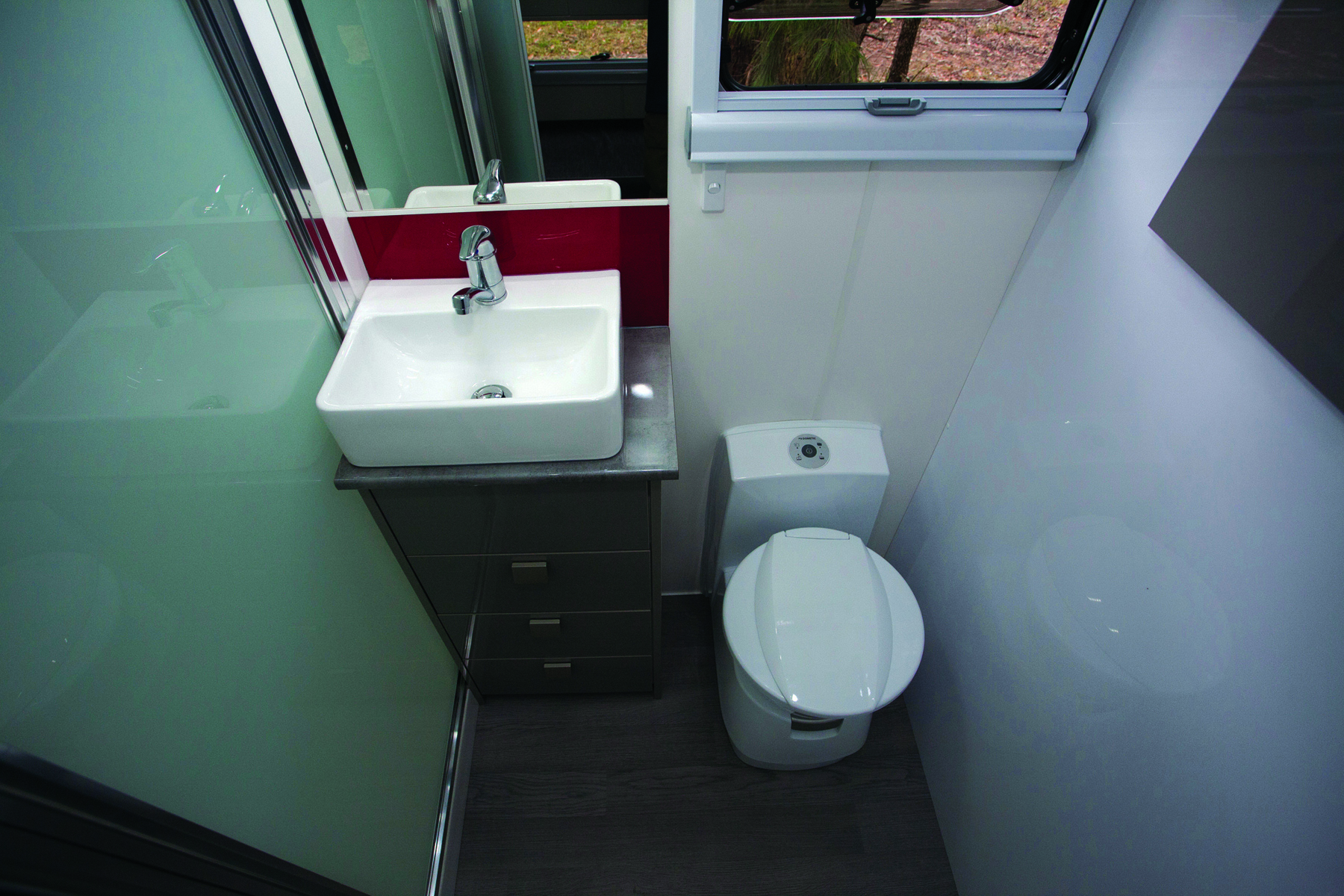 SOME OF THE ESSENTIALS

My review C-Class, an F2-6 model, was described as a ‘semi’ rather than just a touring van. That is just shorthand for semi-offroad which may have a few people scratching their heads.

Although not actually an official industry term, it’s a reasonable way of describing a van built for both sealed road touring and graded outback roads, including those found in quite a few national parks. To achieve this, Essential has built the van on an ARV SupaGal box section chassis with 150mm x 50mm (6in x 2in) RHS rails for the drawbar and main rails. To give more ground clearance, a 50mm x 50mm (2in x 2in) raiser has been fitted above the suspension mounts.

On the subject of suspension, it’s an independent setup with trailing arms, coil springs and shock absorbers, one per wheel. To keep the good ground clearance, the two 95L water tanks have been mounted as high as possible fore and aft of the suspension mounts, as has the grey water tank at the rear of the van. For the most part the pipework, both pressurised and drainage, has been mounted out of the way of any possible stone and rock damage. Where that isn’t possible, an angled bit of protective checkerplate is fitted. This is the case with the grey water drainage located behind the offside wheels.

For towing the van is fitted with Cruisemaster DO35 hitch, something that’s designed for an offroad caravan. There’s no real disadvantage of course, except that I always reckon unless you have a good reversing camera on the tow vehicle, a ball coupling requires slightly less accuracy when hitching up time comes along.

It’s not only ground clearance that matters with a semi-offroad caravan. Travelling on gravel roads means body protection for stone damage is good as well. Essential has done this with the time-honoured technique of using black alloy checkerplate all round for the lower waist areas. On the front wall there’s the added bonus of a storage box and two jerry can holders on the front drawbar, all made from matching alloy checkerplate of course.

For vans designed to travel on country roads, it’s not only mechanical matters that count but electrical ones, because there is the distinct possibly of staying in remote areas and away from grid power. For this, the C-Class is fitted with two 100Ah deep cycle batteries and two 170W solar panels.

Looking at the electrics I wondered why there was a BMPRO BatteryPlus35PM battery management system and an Enerdrive PWM30A solar regulator. A quick investigation revealed only more expensive BMPRO battery management systems have inbuilt solar regulators. Tech types who like to monitor their battery/solar system may lament the lack of a BMPRO battery monitor. But, since the review, Essential has included a high-tech BMPRO SR BMS with inbuilt regulator and Trek monitor display for all levels as a free upgrade.

An Anderson Plug is fitted to the offside chassis rail for using portable solar panel capacity. That’s in addition to the one that connects to the tow vehicle. Since the van is fitted with a three-way fridge and two 9kg gas cylinders, the van is good for quite a few days of freedom camping. The possible limiter, especially with a family on board, might be the water capacity, but that does depend to some degree on how often the shower is used.

A little surprise on this van is the external storage capacity. In addition to the drawbar toolbox, there’s also a front tunnel storage plus two smaller bins, one on either side. Naturally, there’s an awning and the nearside picnic table is accompanied by a little power hub — 240V mains outlet, 12V/USB hub and a TV antenna connection. External marine speakers are fitted as standard.

From the outside, the clue that this C-Class is a family van are the dual windows fitted to the offside rear. Stepping through the forward entry door, the family bit isn’t immediately obvious with the front island bed, nearside dinette and offside kitchen but a peek into the rear area reveals a couple of bunk beds. At first this looks much like any other family van layout but there are a couple of items of note that aren’t seen in every van.

A point of note in this van is that the kitchen bench is noticeably larger than in many a family van. It comes with all the essentials of course. A four-burner cooktop with grill and oven sits alongside a stainless steel sink and drainer. There’s a chunky amount of benchtop space but that can be added to because the cooktop comes with a flush lid, as well as the normal one. Three overhead lockers give a generous amount of storage space, as do the two large drawers, cupboard and wire basket pantry. The drawers are fitted with soft-closers and the acrylic splashback adds a touch of colour.

At the forward end of the overhead lockers is where the TV mounting point and associated electrical/antenna connections are to be found. Easily seen from the front bed or the dinette, parents might be pleased to know that TV viewing from the bunks is more difficult!

Like many a family bunk van, this one comes with an L-shaped dinette, this time upholstered in Vegas microfibre leather. It's an Alan Graham’s upgrade that’s reckoned to be abrasion resistant and easy to clean. It even looks good too! The table isn’t oversized, so an extra seat or two will be handy if the family gathers at mealtime.

Three overhead lockers are fitted above the wall seat but there’s really only two for storage, the third one nearest the door contains some essential (sorry couldn’t resist) electrics such as the BMPRO Battery Plus 35 battery management system. At floor level on either end of the seat, two drop-down doors provide access to the under-seat area.

One of the reasons the dinette is a little shorter than it otherwise might be is because of the two cupboards that have been fitted in between the back of the dinette and the bathroom cubicle. Multiple shelves are fitted, supplying some much needed and fully usable storage space.

Everybody scores a decent bed in this layout. Up front, the parents get a 1.9m x 1.53m 9 (6ft 3in x 5ft) island bed and even the bedhead is a little better appointed than usual. There are the expected overhead lockers and side wardrobes but instead of a bedside cabinet with a drawer or two, there are actually four drawers on each side — three below the shelf and one above. Even with that latter item, there’s still space for pillow cubby as well. Just to add to the general storage, there’s even a shelf fitted under the overhead lockers.

Down at the rear, the two offside bunks measure 1.83m x 0.66m (6ft x 2ft). Each comes with a window, magazine pouch, reading light and power sockets for every necessary voltage. An aluminium ladder with decent steps gives access to the top bunk and, in a novel idea, both bunks have a couple of drawers underneath the mattress. Normally, if fitted at all, only the lower occupant gets this privilege. A curtain is fitted to separate the bunk and bathroom area from the rest of the living area at night times.

Extra storage in this van is clearly a bit of a theme because the cupboard between the bunk beds and the bathroom cubicle is also well kitted out. The lower section, often used for a washing machine, has four drawers and the two-door cupboard above is fitted with multiple, adjustable shelves.

Given the van layout, the bathroom is smaller than a normal full width and if the entire family were in there it would be a bit squishy. However, there’s certainly enough room for a separate shower cubicle, Dometic cassette toilet and vanity cabinet with pedestal wash basin above and three drawers below. Adding to the storage facilities are a couple of cupboards built into the wall above the loo. Not a bad idea at all, especially when bathrooms this size are often short on necessary storage.

Weights matter on any caravan in Australia today but in family vans it’s a slightly more important factor because there are extra bodies and the accompanying luggage. On this van, the ATM is 3300kg and the rated tare mass is 2543kg, giving a healthy payload of 757kg. That’s good on a number of counts, not the least being it gives a bit of flexibility with the tow vehicle. Whilst something like a Toyota LandCruiser makes for a very comfortable tow vehicle, even vehicles like a Ford Ranger or Isuzu D-Max would fit the bill without the Gross Combined Mass (GCM) issue that bedevils heavier towing combinations.

First impressions count for much in any caravan and an initial look at the C-Class suggests something quite positive. A further look enhances that image and the C-Class range certainly has extra features that make the van stand out. For a family van that comes in the form of items including extra cupboards and drawers, not to mention the stylish bunk beds. This is decidedly a family van with a bit of class.