“Are you absolutely, positively sure you want to tackle this track? We really don’t know what state it will be in after that rain last week...”

We put the question to my parents one last time. We had reached the point of no return and it was their absolute last chance to pull out before we were committed to tackling the 4WD section of the Holland Track in Western Australia’s Golden Outback.

With our offroad AOR Odyssey camper trailer, we were confident of making it through relatively unscathed. However, although my parent’s Lifestyle AT-12 EVO falls into that nebulous ‘hybrid’ category – somewhere between a camper trailer and a caravan – dimension-wise, it falls well towards the caravan end of the spectrum. 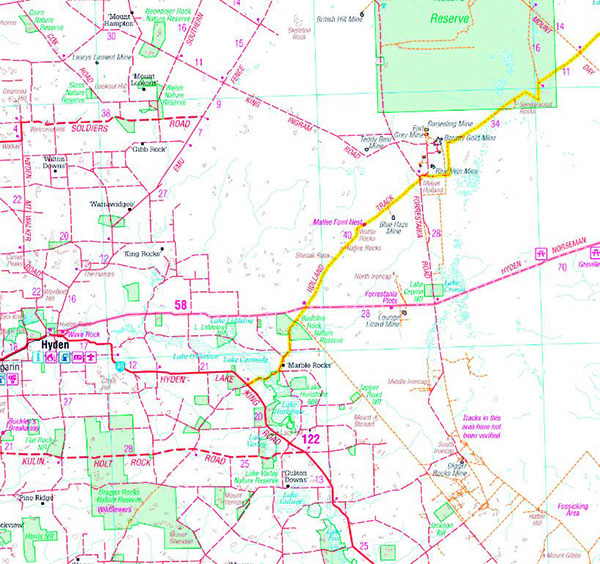 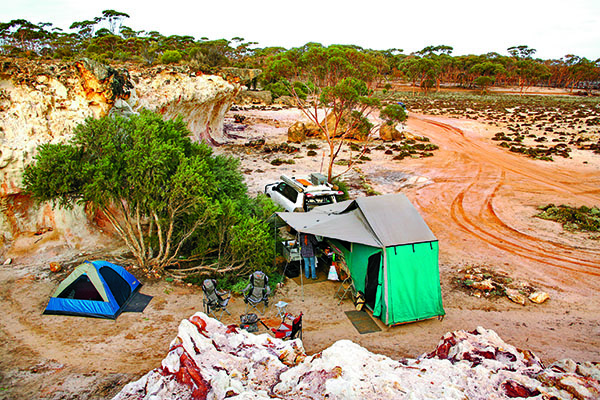 And no matter how well-built an offroad caravan is, its sheer height and weight will always be a consideration with respect to how far it can realistically go offroad. But they were still keen, so we let down the tyres, attached the sand flags and ventured in.

As we pushed forward on to the Holland Track, it didn’t take long to realise this first section was going to live up to its reputation as being the worst, or in some hardcore offroad enthusiasts’ opinion, the best, part of the track. Though there are no technical 4WD difficulties with the Holland Track, this first section is renowned for its very deep ruts and the recent rains had made abundantly clear how they came to be there. There were muddy expanses of water across the track, with no easy way of gauging their depth. There were chicken tracks around some of the more daunting ones, but this wasn’t always helpful as it was difficult to tell whether they were actually a better option.

The first 40km or so of the track is usually the section which is in the worst (or best) condition. If you’re up to giving the mud a go, it is a good idea to travel in convoy with another vehicle as most of the trees are rather small and not really up to being winched off. If playing in the mud isn’t your idea of a good time, then this section can be avoided altogether by entering the Holland Track further along via the Forrestania-Southern Cross Road which T-junctions with the track near Mount Holland. If there has been recent rain, you’ll still encounter some mud further in but nothing to the extent of this first section.

It was pretty slow going and we made it a grand total of about 60km before it was time to set up camp.

The next day’s driving proved nowhere near as challenging, mud-wise, and we made much better time, covering twice the distance of the previous day. Along the way, we passed through country that varied from open sand plains and heath to eucalypt woodlands. There were numerous granite outcrops to explore, covered with pools of fresh rainwater, as well as some man-made waypoints like the track’s visitors’ book. We found it surrounded by a shrine of what can only really be described as rubbish; from empty bottles, shoes and hats to a Christmas gnome and even a desiccated emu’s foot.

Just past Thursday Rock, the track changed to become a formed gravel road and although there were some corrugations, being able to drive at a pace to feel the wind blowing through our hair easily outweighed their discomfort. We camped that night at Victoria Rock, which boasts the lavish facilities of a drop toilet, picnic benches and fire rings.

Next morning, we made the straightforward run into Coolgardie to top up fuel before starting our return journey. Rather than returning back down the Holland Track, we headed southwards along the John Holland Way and, after the last couple of days, it was very easygoing.

Near Lake Johnston, the John Holland Way merges into the Hyden-Norseman Road, which also forms part of the Granite and Woodlands Discovery Trail. There are a number of sites of interest, clearly signposted along the way. One of these that should not be missed is the Breakaways, which has a designated campsite with basic facilities and stunning scenery. A dark laterite (ironstone/granite) ridge top caps the beautiful chalky white, pink, purple and orange shale and sandstone walls beneath. The colours and shapes of the eroded gully are truly breathtaking, and the whole area is a paradise for photographers and artists.

Next day was an easy run back to Hyden, completing our John Holland loop. Though small in population, Hyden boasts a good range of services due to its proximity to Wave Rock, which attracts numerous visitors annually.

This area is a superb wilderness region with an ever-changing landscape and access options to suit a wide range of travellers, from formed gravel to more extreme offroad alternatives. It is pretty much virgin bushland out past the Rabbit Proof Fence and, given the level of use that the tracks get, it’s a credit to those who have gone before that there is a noticeable lack of rubbish and debris to be found, even in the more well-used camping areas. Long may it last.

The John Holland Way is over 600km in length and begins in Broomehill. From Hyden northwards it parallels the Holland Track through to Coolgardie.

The Holland Track is around 350km in length and runs between the towns of Hyden and Coolgardie.

The most spectacular time to visit is in spring, when the wildflowers are blooming and before the summer heat. Winter and autumn can be pleasant, but not after rain.

Rain in any season can make parts of the Holland track impassable and close parts of the John Holland Way. Make sure you enquire about local conditions before entering.

You need to be totally self-sufficient for the bush camping opportunities along both tracks. Other accommodation options can be found in Hyden, Coolgardie and Kalgoorlie.