UNTIL 2011, THERE WERE two main routes for those travelling between Perth and Geraldton in WA. The most popular route was the Brand Highway, which is part of Highway 1 and extends 362km from the northern edge of Perth to the coastal town of Geraldton.

This route is fast and direct, and the highway has few towns to slow drivers down. But it is also a major truck route and isn’t especially scenic.

The other alternative was Highway 116, which runs further inland. This was the old main road to Geraldton through Moora, Carnamah and Mingenew, and is longer and slower than the Brand Highway. The advantages are that it isn’t too busy and the towns along the way have interesting buildings and murals.

But the options changed entirely with the opening of the Indian Ocean Drive in late 2010. This modern highway never strays too far from the coast, and has colourful scenery with white sand hills, spring wildflowers and pretty coastal towns. It’s slightly shorter than the Brand Highway in both time and distance, but the heavy traffic still uses the Brand. Consequently, RVers have discovered it is the best route for cruising the west coast.

The Indian Ocean Drive is an extension of Highway 60, which runs north from the centre of Perth along Wanneroo Road to Yanchep and on to Lancelin. Continuing north through Cervantes and Jurien Bay, the new coastal route joins the Brand Highway just south of Dongara, from where it is a further 65km north to Geraldton.

As you would expect, the route is initially quite suburban, but starts to feel much more rural and scenic by the time you reach Yanchep, 60km north of Perth. After dealing with the roads out of the city, you can celebrate being in the wide open spaces by taking a short trip to the Gravity Discovery Centre.

Turn onto Military Road about 15km north of Yanchep for this hands-on science museum connected with the search-to-detect gravity waves. These mysterious waves were produced at the start of the universe and are colourfully described as ‘echoes of the Big Bang’.

At the Discovery Centre you can also climb a tall leaning tower to drop weights from the top, witness sunspots through a telescope and see how magnetic levitation works. It sounds complicated, but our young granddaughter describes it as the best museum in the world.

If ocean waves are more your style, continue along the Indian Ocean Drive to the Guilderton turn-off and drive west to this coastal settlement at the mouth of the Moore River. The town derives its name from dozens of 17th century silver guilder coins that were found in the ocean in 1931, having come from the wreck of the Dutch ship Vergulde Draeck (Gilt Dragon), which was wrecked of the coast on April 28 1656, making it one of the earliest European ships to visit Australia.

There is a sandbar across the mouth of the Moore River, making the sheltered river a very popular spot for canoeing. There is a picnic area and a general store with takeaway food, so this is also a very good place to take a break. On the way back to the Indian Ocean Drive, watch out for the limestone rocks beside the road, the Pinnacles’ less-famous cousins.

A little further north, another turn-off takes you to Ledge Point, a laid-back beach resort with a general store and a new, modern caravan park next to a nine-hole golf course and country club. There is a cray-fishing industry in the village, so fresh seafood is always on the menu and it’s a popular spot for fishing. Dinghies can be launched from the beach in good weather, and 4WDing is permitted on the beach.

Back on the Indian Ocean Drive, the next stop is Lancelin, which is famous for its snow-white mountains of sand. Sand boards, trail bikes, buggies and 4WDs are allowed on some parts of the sandhills. The town also has beautiful beaches, cafes, a supermarket and two caravan parks with basic facilities.

Long stretches of sparkling white sandhills are a feature of the drive north towards Cervantes. You can stop off at the Nilgen Lookout to admire the coastal scenery, plus a wonderful array of colourful wildflowers in spring. About 35km further north, where the Indian Ocean Drive comes very close to the coast, there is another parking bay with spectacular views of Wedge Island.

Until recently, this stretch of coastline was pretty remote and only accessible by 4WD. A few unofficial settlements of beach shacks sprung up along the coast and the fishing village of Grey is still somehow managing to survive, despite now being surrounded by Nambung National Park.

There is a short detour to Grey, where you can leave your vehicle and walk through to the beach on sandy tracks that pass the corrugated iron shacks with their wind-powered generators, solar panels and rain-water tanks.

Another 25km up the road brings you to the main tourist attraction along the Indian Ocean Drive, the amazing Pinnacles, which are easy to access via a 5km detour on a sealed road. There is an entry fee for this section of the Nambung NP, and also plenty of parking spaces next to the newly-opened interpretive centre.

Conventional vehicles and 4WDs can tackle the drive through the Pinnacles on a sandy track, while motorhomers will have to do it on foot. Either way, the enormous limestone rocks dotted across a sandy desert landscape are an incredible sight. 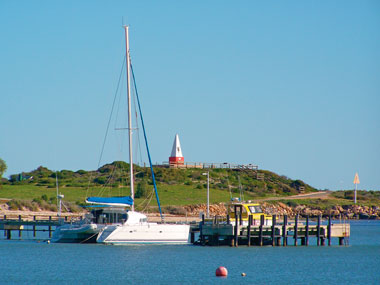 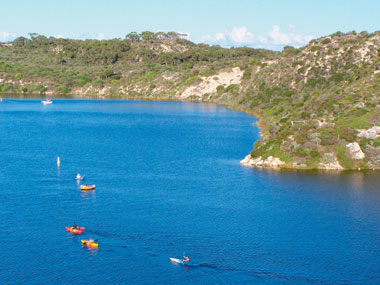 The small coastal town of Cervantes is about 10km north of the Pinnacles on the southern end of the Turquoise Coast. Stand on the beach looking across the silver sand to the blue-green ocean and you can see where this coast gets its name. The name Cervantes comes from the American whaler Cervantes, which was wrecked on this stretch of coast in 1844. The town has a small shopping centre, garage and caravan park.

Another 25km further north is the larger town of Jurien Bay, where the Jurien Bay Tourist Park has a beachside location right by the jetty. There are wonderful views, particularly at sunset, from Turquoise Way, a 2km beachside walk that starts at the jetty.

From Jurien Bay there is the option of taking some inland routes to investigate Lesueur and Stockyard Gully national parks, which are especially attractive in the spring wildflower season. But sticking to the coast and the Indian Ocean Drive, there are a number of small settlements to investigate as you drive north. There is a basic campsite (no power) among the sandhills at Sandy Cape, and small caravan parks at Green Head and Leeman.

The best view of the picturesque rocky cove at Leeman is reached by walking up to Ti-Tree Point Scenic Lookout. Watch out for the man-made osprey nest near the lookout. If you are lucky, you may even see one of these majestic birds sitting on the nest or a nearby pole.

After many kilometres of coastal scenery, the Indian Ocean Drive finally curves a little inland to join the Brand Highway, 23km south of Dongara. Both Dongara and its adjoining harbour of Port Denison are famous for fig trees lining the main street and harbour foreshore.

Dongara Tourist Park is in Port Denison, backing on to South Beach and close to the harbour and the obelisk on Fisherman’s Lookout. The sea is still the same pretty turquoise, but plaques around the dramatic red and white obelisk are a reminder this area has seen many shipwrecks on the dangerous reefs.

Geraldton marks the end of the journey but along the highway, north of Dongara, don’t miss the historic hamlet at Greenough, which is now owned by the National Trust and is one of Australia’s best-preserved 19th century towns.

The largest town on the coast north of Perth, Geraldton has many tourist attractions, including an informative maritime museum. But best of all, the town has a laid-back holiday atmosphere, beautiful beaches and those same dramatic sunsets that make cruising the west coast such a pleasure.

The drive from Perth to Geraldton is around 430km.