LEAVING THE NORTH
West Coastal Highway and heading towards Denham, WA, there’s a feeling of great anticipation as we pass the signs proudly trumpeting “World Heritage Area”. We’re already accustomed to the magnificent beaches of the west coast, with their magnificent turquoise waters and brilliant white sands, but this heritage listing is attributed to another type of natural phenomena.

This region is one of few to have snaffled such a wide range of unique natural wonders: the world’s largest seagrass beds, interactive and friendly dolphins at Monkey Mia, and high salt-tolerant species of cockle shells and ancient stromatolites.

Travelling along Shark Bay Road, the first stop is Hamelin Pool, home to the stromatolites, small rock-like structures formed in shallow waters by binding microbes. The warm, shallow pools are twice as salty as normal seawater, allowing the microbes to flourish and form without fear of predators, who cannot survive in the conditions. These stromatolites are among the earliest forms of life on earth.

Sixty-kilometres further north at the Shell Beach Conservation Park, cockle shells 5m deep, rather than sand, line the beach. The shells come from L’Haridon Bight and are washed onto the shore by the strong tide.

The town of Denham is central to most local attractions and the best place from which to explore everything Shark Bay has to offer. The Denham Seaside Tourist Village, a Top Tourist Park, is the place to stay, located at the end of the main street, with walking access to most services.

The park boasts a beachfront vista with panoramic ocean views, and is ideal for swimming, fishing, boating, or just lazing on the beach. Making the best of the beach frontage, most water-facing sites are tiered to allow everyone to enjoy the views. Sites are large enough to accommodate boats, but work just as well for big rigs. Facilities include a camp kitchen, barbecues, bike hire, gas refills, ice, laundry and a tour booking service.

For the chance to interact with wild bottlenose dolphins, the world-famous Monkey Mia is only a 26km drive down the road from Denham. For the best chances of seeing the dolphins, arrive at the interactive area just before 7.30am, which is generally when the dolphins appear. They are then fed around 30 minutes later.

The rangers feed mature female dolphins up to three times a day between 8am and midday. As many as 13 dolphins spanning three generations visit the feeding area, each with a name and identifying features. And it’s quite the celebrity lifestyle for these sea-going mammals – make a quick appearance, interact with the crowd and get a feed of fresh fish.

A daily entry fee of $8 per person, or $12 for a holiday pass, allows you to enjoy all the facilities of the Monkey Mia Resort as a day visitor, including relaxing on the beach, swimming in the pool and venturing out on one of the boat cruises.

François Peron National Park lies at the far end of the sandy Peron Peninsula. The historic Peron Homestead and visitor centre shows its pastoral heritage with a self-guided tour.

An artesian hot spring supplies a hot tub at 44°C, and there are shaded and grassed picnic areas, barbecues and toilets. This is a great place to end a day’s fishing and exploring.

Beyond the homestead, vehicle tyre pressure gauges are supplied on both sides of the sandy track, encouraging the reduction of pressures on entry, and reinflation on the return pass. The soft, tracks are only suited to high-clearance 4WDs and camper trailers weighing less than 1000kg. Vans and large boats are not permitted.

The track itself runs single-file through red sand, with limited areas to pull over for oncoming traffic.

Bush camps scattered around the peninsula are suitable for day trippers. The furthest is Cape Peron at 51km, or around 80 minutes, from the national park entry. Others include Big Lagoon, Gregories, South Gregories, Bottle Bay and Herald Bight.

The western locations are generally best for swimming, snorkelling, fishing and boat launching. Herald Bight is the only camp on the eastern side, protected from the prevailing south-west wind. Access is via perilously soft sand, requiring significantly reduced tyre pressures to get anywhere near the beach.

Carrarang is the other peninsula within the Shark Bay region, leading out to Steep Point, the most westerly point of mainland Australia. The area is now managed by the Department of Environment and Conservation, with camping available at Steep Point, Shelter Bay and False Entrance.

With its 4WD-only status, the area is off limits to most caravan owners as a camping destination, although it’s an interesting spot to explore as a day trip.

The process of fishing off these large rock platforms and watching large baits carried several hundred metres offshore by gas/helium-filled balloons is quite spectacular.

A single-vehicle barge crosses the 2km straight to Dirk Hartog Island National Park, which has options to bunk in the lodge or throw down a swag or tent in any of the camps. And once you arrive on the island, exclusivity is virtually guaranteed, with a limit of eight people permitted at any one time. Alternatively, you can fly in or charter a boat.

The Shark Bay region offers a veritable smorgasbord of delights. From the rugged cliffs and sandy dunes of the Carrarang Peninsula, to the more family-oriented Denham, Monkey Mia or François Peron National Park, there’s something for everyone. 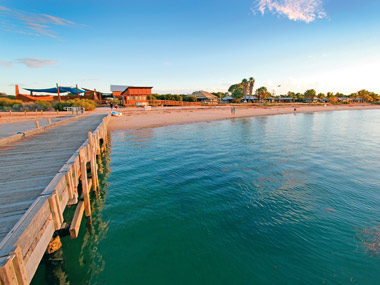