As much as we’d love to, it isn’t always possible to pack up the car, hitch up the van and take off into the sunset for weeks, or months, at a time. When life gets in the way, sometimes the best we can manage is a few days’ respite. But no matter where you live in Australia, there’s bound to be a top spot just a few hours’ drive away where you can take your foot off the gas, wind back and enjoy life. 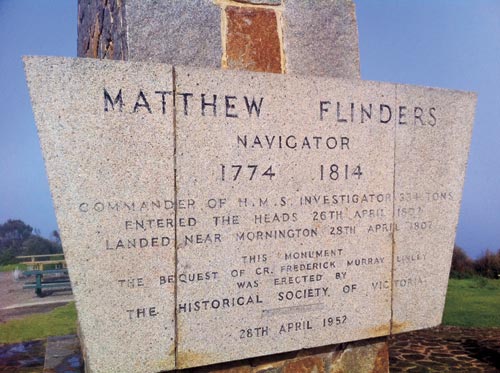 From Melbourne’s CBD, you can be in any number of wonderful places within a couple of hours – Wilsons Promontory, Phillip Island, the northern goldfields, the east coast – but this time, the destination was just across the bay.

The top of the Mornington Peninsula is less than 60km, but a whole world away, from the city. Head south-east from Melbourne on either the Monash Freeway/EastLink or the Nepean Highway and within 30 minutes, you’ll see the landscape start to change.

If you’re not in a hurry, or you’re coming from the Bellarine Peninsula on the western side of the bay, the Queenscliff to Sorrento ferry is a pleasant way to travel – car, caravan and all. The ferry runs in all weather, every hour between 7am and 6pm, and takes about 40 minutes to cross Port Phillip Bay.

Once you reach Sorrento, you’ll disembark at the ferry port, which was built in 1870 and welcomed tens of thousands of tourists every summer from the late 1800s to the early 1920s. The bustling seaside port was a popular day trip for city folk and was made accessible by a fleet of paddle-steamers which traversed the bay. Tourists would pour off the ferries in Sorrento and make their way up a footbridge to the hill-top tram terminus. Trams, which ran from 1890 to 1921, would cart beachgoers a mile across the peninsula to Sorrento’s Back Beach on Bass Strait.

The original tram terminus and a small section of the track have been restored and a series of plaques at the site tell the story of Sorrento in its heyday. Ocean Beach Road, which runs through the middle of town, takes the same route as the original tram line to Back Beach.

With its rocky outcrops, reefs and rips, Back Beach presents some challenges for swimmers and surfers alike, but with its gorgeous natural amphitheatre formed by two protruding headlands, the beach is definitely worth a visit.

The beach is now serviced by a surf life saving club which patrols in summer, and the All Smiles waterside café. There is also a large car park and picnic area with tables, making it a great spot to park and enjoy your lunch with a view.

Sorrento is compact and easy to navigate on foot, but parking with a caravan in the busy main street could be problematic, so try to avoid it until you unhitch. We were lucky enough to visit on a gloriously clear, sunny, winter weekend and while it lacked the buzz and vibrancy that a plethora of sun-seeking tourists would bring, it’s easy to imagine the place in summer.

There is a unique war being waged in Sorrento and other peninsula towns – the battle for the title of best vanilla slice. Yes, you read that right. Down here, several towns make claim to the biggest or best French pastry, and as a self-appointed vanilla slice connoisseur, I felt it was my duty to test them out.

We sampled two local delicacies – one from the fish and chips shop in Flinders which was at least five inches tall, and one from Just Fine Food in Sorrento, where the front window is soley dedicated to newspaper and magazine articles about the pastry.

At $8-plus a slice, these vanilla slices are not your average custard with the consistency of cement and icing as hard as, well, ice.

Sorrento, or really any southern peninsula town, is a good base for exploring the region. There is an abundance of caravan parks and facilities from Frankston all the way down the peninsula, so wherever you decide to pull in for the night, you’re bound to be well-catered for.

Less than 20km across at its widest point, the peninsula offers a range of activities but is probably best known for its national parks, natural beauty and wild landscapes. On the southern tip, Cape Schanck and the Mornington Peninsula National Park are a drawcard for nature lovers. There are several sign-posted walks of varying distances and difficulties. For a quick and easy jaunt, take the boardwalk down to the very tip and marvel at the fiery red limestone cliffs and black rocky beach. Tours of the iconic Cape Schanck lighthouse, which is still in operation, are also available.

ONWARDS TO THE POINT

Heading west along the coast, Point Nepean is your destination. Parking is available at the visitor centre and there are several options for walks.

A Transporter shuttle bus, replacing the usual open air tractor-train, is available if you don’t fancy the walk, but be sure to buy tickets at the office before you set out – if you get to the end and want a lift back, you won’t get it without one. Bikes are also available for hire, which is a popular way to traverse the track.

The Quarantine Station, a collection of about 50 heritage-listed buildings, is currently closed to foot and bike traffic and is only accessible by the Transporter.

It’s about 5.2km to the tip of Point Nepean – an undulating trek along a road or a track with some decent hills, so whether on two wheels or two feet, be prepared to work hard for the view.

Along the way, you can stop and have a look through an old Gunner’s Cottage, marvel at the size of a large canon, visit several machine gun emplacements and walk the tunnels of Fort Pearce and Fort Nepean.

History (and a plaque at the fort) maintains that the first Australian shots of both WWI and WWII were fired from Fort Nepean. On August 5, 1914, the German ship SS Pfalz attempted to escape Port Phillip and, within minutes of war being declared, Fort Nepean’s commander was ordered to fire on the ship: “Stop her or sink her”, was the direction.

On September 4, 1939, again within hours of war being declared, one of Fort Nepean’s guns fired across the bow of a ship which had failed to identify itself. The ship was then identified as the Australian freighter SS Woniora.

It’s worth stopping for a breather at the Harold Holt Memorial at Cheviot Hill. The memorial overlooks the beach where the former Prime Minister disappeared while swimming in 1967. While there was heavy conjecture and several conspiracy theories surrounding his disappearance, Holt was declared drowned at a Coroner’s inquest in 2005.

The final ascent to the point is worth the walk as you gaze out over the heads where Port Phillip Bay meets the Bass Strait. Point Lonsdale looks almost close enough to touch and container ships coming and going through the heads make interesting viewing.

Arthurs Seat State Park, near Dromana, provides great walks and spectacular coastal views. The largest hill, or ‘seat’, rises 305m above sea level and offers a sweeping vista across the bay to the Melbourne skyline and even as far as the You Yangs ranges on a clear day. The chairlift at the site is no longer in operation after a series of accidents left tourists stranded and, in some cases, injured. Travelling into the park from Dromana, there are several spots to pull over and check out the view from the lookouts dotted along the way.

Once your feet are weary, it’s time to sample the next best thing in the Mornington Peninsula – its local produce. And by that, I mean the wine.

The peninsula is a relatively new wine-producing region, with the majority of vines planted 15-20 years ago. While this is pinot noir and chardonnay country, many winemakers are pushing the boundaries and coming up with some delightful wines in other varietals.

Many operators offer half or full-day winery tours, or you can pick up a map from a tourist office and do it yourself. Shoreham Road in Shoreham/Red Hill has a treasure trove of wineries, including Pier 10 and Tuck’s Ridge – two of the oldest.

We were lucky enough to happen upon the Red Hill Brewery in Shoreham Road while its cellar door and café were still open. The brewery has about 10 varieties of beer, including the delectable Imperial Stout and mouth-watering Scotch Ale. But unfortunately, the brewery was closed to the public shortly after our visit.

Once you’ve had your fill of the peninsula, you can head north, east or west to continue your adventure, wherever the road may take you.