After bidding goodbye to Murray-Sunset NP, following a sunrise stroll on the lake to see it in a different light, we keyed ‘Melrose, SA’ into the Hema HX-1 and set forth for South Australia.

We reached the border about 85km later, just before Pinaroo and, in our hurry to get on the road, realised we had forgotten about all the fresh fruit and veg we’d picked up in Melbourne the previous day. Unwilling to throw away perfectly good avocado and beautifully ripe pears, but cognisant of the risks of transferring fruit fly across state borders, we pulled over at the unmanned Quarantine Station on the eastern side of the border and had a little picnic – at about 8am. 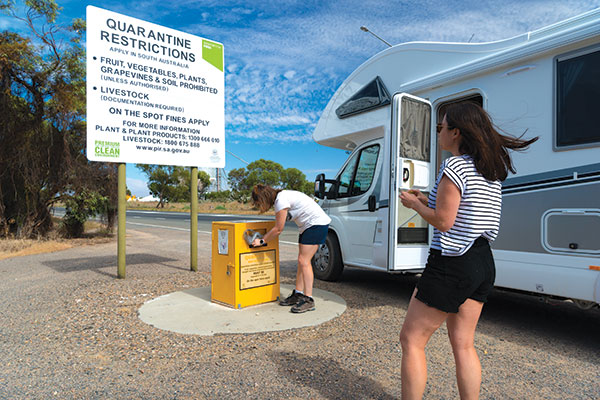 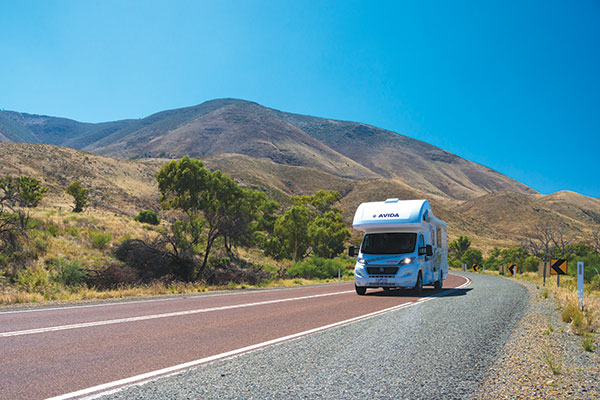 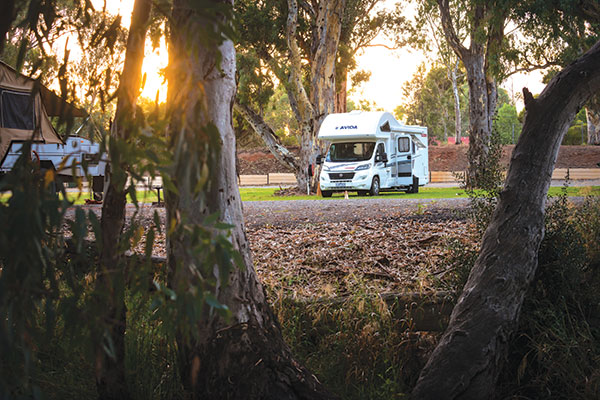 Full of avocado and Vegemite, or pear and cheese, sandwiches, we pushed on towards Loxton, in SA’s vibrant and fertile Riverland region. Keen to see the mighty Murray River up close, we followed our noses to the water then decided to follow some signs to the intriguing ‘Tree of Knowledge’ on the riverfront.

As we wandered through the peaceful riverside park, dotted with families having picnics and caravanners from the nearby Riverfront Caravan Parks dangling fishing lines in the river, we spotted another unusual attraction – and the first of many ‘Big Things’ we’d come across on this Avida Cross Country trip – Loxton’s Giant Pelican. An info plaque told us the big bird was a relic from a 1979 Mardi Gras parade where it premiered as a float for the Loxton Aquatic Club and carried the Mardi Gras Queen.

After Loxton, we headed for Berri – again, not the most direct route to where we were going, but a chance to explore another pretty riverside town and another Big Thing!

The next town we came to was Renmark – and it was only at this point we realised something was awry. As the driver, I have to take full responsibility – along the way, I had seen a road sign pointing to Mildura, which I thought was a bit strange. But I didn’t raise my concern with the others, as my sense of direction is notoriously bad, and the trusty Hema HX-1 was telling me to keep going. In Renmark, however, it started insisting I make a u-turn – and we realised we’d headed back east, the wrong direction, for almost 20km! This 40km detour did sour my relationship slightly with Hema’s ‘Aussie Lee’ but I quickly forgave him and, to his credit, it was the only mistake he made in almost 4000km of driving. But with afternoon closing in and 3.5 hours of driving still ahead of us to Melrose, on the western edge of Mount Remarkable National Park (NP), we had to hightail it out of there.

We arrived in Melrose just on dusk and were immediately enchanted with the beautiful old town set against the mountainous edge of the national park. Though desolate at that hour, it had an old-world charm illustrated by quaint heritage cottages, beautiful grand buildings like the North Star Inn and wide, open streets.

We checked into the Melrose Caravan Park with the friendly manager Danny and had our pick of the grassy, drive-through sites, surrounded by beautiful bushland and on the edge of a (dry) creek.

The following morning we rose early to find Melrose bathed in beautiful light, not yet shaded by the towering hills overlooking the town. We wandered through the town, still quiet apart from the occasional child making their way to school. Buildings like the Mount Remarkable Hotel, the Melrose Institute, the North Star, the old blacksmith’s and the various bric-a-brac cottages give this town a warm, historic charm.

When we returned to the Birdsville, we noticed the rear passenger-side tyre was looking a little low on air so we headed to the service station to refuel and pump it up. Refuelling was not a problem but, somehow, even between four of us, we couldn’t for the lives of us figure out how to pump the tyre back up. First Ali tried. “I think it’s getting flatter,” I remarked, a few seconds after she started. “Give me a go.”

“It’s definitely getting flatter,” Steve offered, as he took over the air compressor.

“We’d better stop before it gets too low,” Matt suggested. “The compressor must be buggered.” So with that professional opinion in place, we had no choice but to set off and find somewhere else to air up before heading to Mt Remarkable.

I took the wheel for the drive in, which started out sedately enough. We decided against taking Aussie Lee’s advice to take a ‘shortcut’ into the park, opting for the marked road a few kays ahead.

A sign advising that the road ahead was not suitable for caravans, due to steep descents, prompted a quick confab about whether that applied to us. The general consensus was no. Though large and heavy, the rigid chassis and lack of towed vehicle on the Birdsville made us confident we could handle it. And handle it we did – it was definitely steep and gave the Fiat’s engine and brakes a good workout! We dropped it into manual mode to ease off the brakes and it handled much better after that.

We parked up at Alligator Gorge and took the steep stairs down into the floor of the narrow gorge. We opted against the full 9km circuit walk and, instead, walked in one direction to The Terraces then back in the other direction to The Narrows, before exiting up the same steep steps we had come down.

At first, the gorge was quite dark and cool but as the sun moved overhead, it glowed spectacularly in the morning light. It was quite damp on the gorge floor and looking up the sheer, almost vertical walls, showed plenty of plant life thriving, even growing directly out of the walls in some places. We spotted a couple of kangaroos hopping across the walls high above us and heaps of large spiders and their even larger webs but, happily, no snakes down on the gorge floor with us!

After climbing out of the gorge, we headed for Ali Lookout for an impressive view into the gorge we had just climbed out of. The lookout was named not for any alligators, like we first thought, but for an Aboriginal shepherd who used to graze 2000 sheep in the gorge. The origin of the name Alligator Gorge is unknown – two possibilities are that it was derived from the shepherd Ali or whether it was from people confusing the lace monitors which supposedly frequent the area (we didn’t see any) with actual alligators!

By now the midday sun was beating down and we had to make tracks again, this time exchanging the arid outback conditions of Melrose for the cooler, coastal delights of Streaky Bay.

The full destination piece appears in Caravan World #564 2017. Subscribe today for the latest caravan reviews and news every month!