The 2500km-long river winds it way through New South Wales, Victoria and South Australia to finally reach the ocean near Goolwa on the Fleurieu Peninsula. Hindmarsh Island, a hop and a step from Goolwa, is the place to see the exact spot where the Murray empties into the Southern Ocean. You’ll notice a dredge which has been in place since October 2002 to keep the Murray mouth open. A congested Murray mouth would have fatal consequences for the Coorong, as cool oxygen-rich seawater is essential for a healthy estuary to maintain the right salinity and temperature levels.

Goolwa, the gateway to the Coorong NP, is a beautiful seaside town with a rich past. The historic wharf is definitely worth a look where the Goolwa Riverboat Centre and the paddle steamer Oscar W are the highlights. The 1908 heritage paddle steamer is a real beauty, with one-hour cruises available. 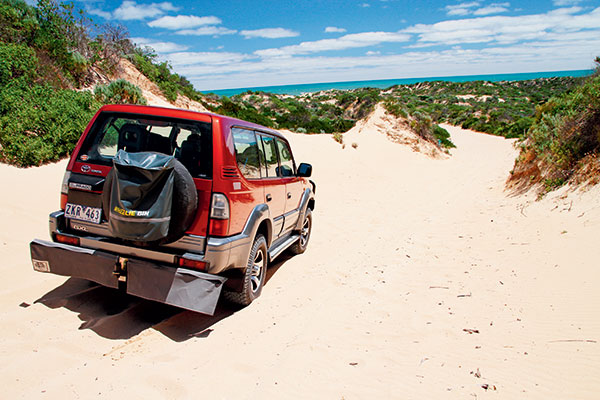 Nearby Hindmarsh Island is accessed via an impressive bridge, spanning 319m and reaching 14m above water at its highest point. Captain Charles Sturt used the island as the highest point to locate the mouth on his epic journey down the Murray River in 1830. An impressive monument pays tribute to this courageous explorer who opened up the interior of our vast country. The monument can be found on the corner of Monument Road and Randell Road.

The start of the Coorong NP can be found a couple of kilometres south-west of Goolwa, the location of the Goolwa Barrage. This barrage is part of a system of five barrages, designed to regulate the water flow and prevent saltwater from entering the lakes and rivers. The 730m Goolwa Barrage is an engineering marvel and took five years to construct. Due to the deep river channel, sand and silt, the barrage required more than 4700 piles up to 12m long for support foundations. In 2010, a fishway was completed to enable many species of fish to continue moving between the estuary and the River Murray.

Coorong NP can be explored in different ways, from a 4WD to a boat or a kayak. The Spirit of the Coorong departs from Goolwa Wharf and offers three cruises: 2-hour Murray Mouth cruise, 3.5-hour Coorong Discovery Cruise and the 6-hour Coorong Adventure Cruise.

If you fancy something more active, a tour with Brenton Carle from Canoe the Coorong is the way to go. Brenton established his eco-tours in 2010 and believes the Coorong is one of South Australia’s “best kept secrets”. His business started off with a dream and has since grown into a reputable nature-based eco-friendly experience which is so much more than just a kayak tour.

“People think they are going on a kayaking trip but what many people enjoy the most is the guided bush tucker walk through the sand dunes,” Brenton said.

The park has a rich cultural history with the traditional land owners, the Ngarrindjeri, thriving here for thousands of years. “Seeing some of the traditional food sources that have been eaten by the Ngarrindjeri is a real eye-opener for many,” he continued. “I love showing people around the Coorong because it is my favourite place in the world. Seeing people fall in love with the place right in front of my eyes is special.”

Camping is another popular activity in the park. Due to the size of the Coorong, there’s a variety of campgrounds to choose from but 42 Mile Crossing is one of the more popular ones, due to its all-weather all-year-round access to the ocean beach. It also happens to be a large, flat camping area with drop toilets and a water tank. The campground owes its name to the distance from Kingston SE.

The 1.3km sandy track to the beach is easy to navigate as long as you lower your tyre pressures. The Southern Ocean pounds this stretch of coast and is, therefore, not safe for swimming. Beach driving is allowed though you won’t be able to cross Tea Tree Crossing further north unless it’s completely dry, which usually doesn’t happen until summer.

Access north of Tea Tree Crossing is closed between 24 October and 24 December each year to protect the Hooded Plovers during their nesting season. The Coorong is a haven for more than 200 species of birds with some migratory birds flying from as far as the Arctic Circle.

Surprisingly, the area has a golden past with large numbers of Chinese gold seekers landing in South Australia in the 1850s to walk more than 800km to the Victorian goldfields – many died on the way. Their story has been retold in the ‘Journey to Gold’ at Chinaman’s Well, just 5km north of 42 Mile Crossing.

Nearby Salt Creek is an interesting place in more ways than one. The roadhouse is full of fascinating memorabilia while the oil rig replica tells the tale of Australia’s first oil drilling operation back in 1892, which was unfortunately unsuccessful. A short drive north is Jack Point, a pelican observatory providing a bird’s-eye view of one of the largest pelican breeding colonies in the world.

Coorong NP might not have the immediate ‘wow’ factor but if you’re willing to take the time to explore this unique destination you’re bound to look at it with different eyes.

The full destination piece appears in Caravan World #562 2017. Subscribe today for the latest caravan reviews and news every month!