FEW TOURIST GUIDES or brochures encourage you to visit the rugged promontory set 32km to the south-west of Port Lincoln, at the foot of SA’s Eyre Peninsula, and overnight visitors are rare. Indeed, Whalers Way is listed at number 25 out of the 26 "Things to See" in the Sydney Morning Herald’s online guide to Port Lincoln, and it doesn’t rate at all on most of the local tours.

The rambling "Permits Office" kiosk, with its badly faded facade and the lonely flagpole greeting you at the entrance to the privately-owned Whalers Way Coastal Nature Reserve, set the scene. The grim outlook is further augmented by the scarce and often rotting signs.

Little wonder it was chosen as the filming location for the Australian version of the Survivor television series in late 2001. It’s a place to discover – or lose – yourself. 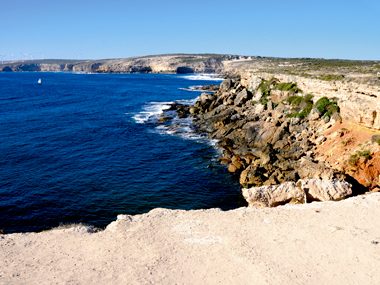 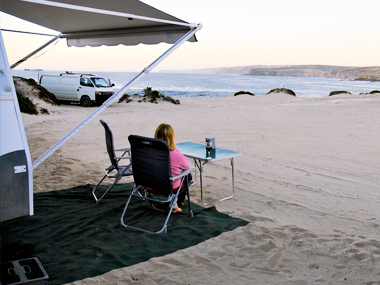 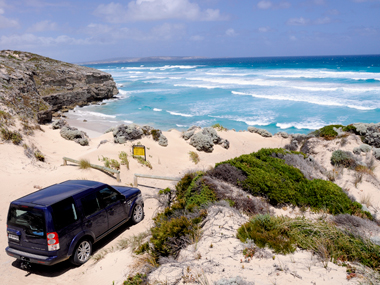 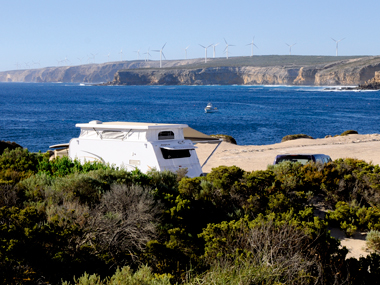 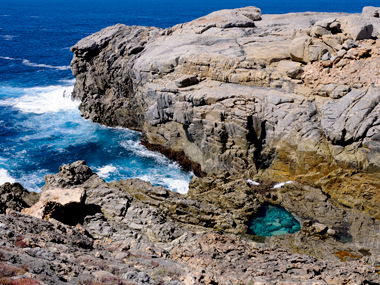 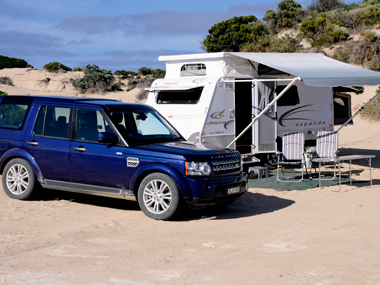 Reading the beginning of this story provides all the necessary reasons: it’s a road less travelled; historically important; delivers some of the Eyre Peninsula’s most spectacular scenery; and is an easy side-trip for anyone visiting Port Lincoln, Coffin Bay or the Port Lincoln National Park. And as a bonus, there’s a spectacular dune-drive across the nearby Sleaford Mere Conservation Park if you de-couple your 4WD tow vehicle.

Your best starting point for a Whalers Way experience is the Port Lincoln Visitor Centre, where you need to purchase a vehicle permit for $30, plus a $10 deposit for a key to the gate at the coastal nature reserve. These can also be obtained from the kiosk at the reserve entry during opening hours.

The bitumen from Port Lincoln runs out just short of Sleaford Bay, but the last 12km of road to the reserve gate is graded by a local farmer. It’s usually in good order and should pose no problems for a caravan.

The further 12km of unsealed road past the gate is not quite so perfect due to high maintenance costs, but it’s wide, speeds are low and it offers excellent access to car parks that lead to the plethora of blowholes, bomboras, deep crevasses, capes and cliffs that abound on the promontory.

The sole designated camping area at Whalers Way is at Red Banks, at the reserve’s western-most extremity. This site is a basic bush camp, as apart from a nice level area backing onto the dunes, there are no real facilities.

There’s also a separate picnic area with a gas barbecue and toilet further back just off the main access road, but unless you’re desperate to use a drop toilet, we’d recommend bringing your own loo or shovel!

At Red Banks you are greeted to a spectacular view of D’Anville Bay, with a haunting view of the Cathedral Rocks Windfarm on the horizon. It’s a great place to drop the van or camper, roll out the awning, and enjoy a “sundowner” as you watch the sunset to the sounds of waves crashing on a stony beach.

Whalers Way can comfortably be explored in a day, ideally by driving to car parks that give foot access to the various sights. But if you have enough time it can also be done on foot. Either way, make sure you take food and water with you, because apart from the kiosk at the reserve entry, there are no other shops.

A good starting point near the Red Banks camping area is Cape Carnot, named in 1802 by French explorer Nicolas Baudin after one of Napoleon’s generals, Lazare Carnot.

Made up of two spectacular promontories, the rocks making up Cape Carnot are said to be among the most ancient in SA, up to 130 million years old.

The French navigators who plied these waters in the early 19th century treated this stretch of coastline with much respect. Waves have claimed numerous lives and the signs serve as a constant reminder of just how dangerous Cape Carnot can be.

Nearby is Mainsail Break, which was known to the local fishermen as Wreck Reef. The spray from the surf at this spot rises up to 46m, and recalls the mainsails of the old windjammers that sailed this coast, hence its name.

The Caves and old Whalers’ Grotto is a unique and beautiful series of sea caves and overhangs, featuring stalagmites, stalactites and rock pools, often containing fish.

Further north towards D’Anville Bay you’ll find Theakstone’s Crevasse. Named in the 1930s after a local pioneer family that settled in the area in 1889, this fissure in the rock face was formed over millions of years along a fault line, and is deceptively deep. Standing at the lookout above the crevasse, it appears to be little more than a few metres deep, but venture down the path which circles the head of the crevasse and you’ll find this narrow gully is actually around 13m deep with 9m high walls, and extends some 30m underground.

Equally fascinating is Flinders Crevasse, which cuts around 183m in from the coast before terminating in a huge overhanging cave.

On the south-east corner of Whalers Way, Cape Wiles is another spectacular location – a 100m high cliff face above the swirling sea, overlooking a small island.

This island, which has been worn away through its middle by centuries of tides, consists of two golden sandstone pyramids standing defiantly against the pounding waves, while scores of fur seals frolic in the water or bask on the rocks.

WHALE OF A HISTORY

Further around the eastern corner, where the breathtaking coast is dotted with flowering native flora, lies the area that originally gave the promontory its name.

American sealers were among the first inhabitants of the area following the publication of Matthew Flinders’ maps of the coast in 1803, and by 1837 – a year after the settlement of Adelaide and two years before the establishment of Port Lincoln ­– they were engaged in whaling at a remote spot called Fishery Bay, near where the reserve entrance is now located.

It’s believed the South Australia Company Whalers lived here in the dunes back from the beach, but their success in harvesting southern right whales made it a short-lived enterprise and whaling virtually stopped around 1842. Thankfully, the southern rights are back at Fishery Bay during the winter months from May to October, when they shelter in the nooks and crannies of the rugged coastline.

At its busiest, the station was manned by 30 whalers with three boats, and evidence of their presence can still be seen in the ruins of stone huts, whale bones and laid hearths from their cooking fires.

Despite all this history and geological significance, it was not until 1969 that work began to develop Whalers Way for tourism, thanks largely to the efforts of Robert Theakstone, whose work led its declaration as a historic reserve.

If you’re travelling to the southern end of Eyre Peninsula, it’s certainly worth a visit – but BYO everything!

A DAY ON THE DUNE

Kids of all ages love a good sandpit, and the sprawling dunes that form a backdrop to Sleaford Bay at the base of Eyre Peninsula tick all the boxes.

The Sleaford Mere Conservation Park is part of the Lincoln National Park and covers an area of around 560ha, stretching 12km from Wanna in the east to the popular surfing beach at Sleaford in the west. This is an interesting day excursion from either Whalers Way or Port Lincoln.

You need a daily parks permit to enter the dunes (purchased on an honour basis at stations based at the entrance to the Lincoln National Park), and after lowering your tyre pressure to the recommended 18-23psi, you’re ready to go.

These are serious dunes and at times you could be fooled into thinking you were in the middle of the Sahara, with nothing to see but golden sand. However, there is a route through the dunes marked by red-topped poles, varying from narrow sandy tracks to full-blooded sandy hills, which it is highly recommend you follow.

At one stage we lost track of the poles crossing a large expanse of sand and found ourselves heading towards a cliff that, had my wife not yelled a warning, would have dropped us into the Southern Ocean. Nonetheless, the route is generally easy to follow and there are many places you can turn off for a picnic or to visit the rocks and wrecks that dot this wild coast.

Among these wrecks, now little more than a few rotting beams and steel ribs protruding from the sand, is the Mary Ellis, a wooden ketch that worked SA waters from 1899 until 1907.

Its final voyage from Port Adelaide to Venus Bay, carrying general cargo and 24 tonnes of superphosphate, ended at Sleaford Bay where it took shelter and was grounded after being badly damaged in a storm. It ultimately broke up on the beach at the western entry to the Sleaford Mere dune track, leaving its captain and a seaman to walk the 24km to Port Lincoln to report its fate.

Again, if you are planning a dune drive, take all the usual precautions. Ideally, tell someone that you are going and then report back on your return in case of vehicle trouble.

Take food, water, sunblock and a shovel. Then enjoy one of Australia’s great coastal dune drives.