Have you ever travelled to a destination only to later discover that you bypassed a stunning vista or a noteworthy historical attraction? Sure, there's joy in uncovering what's hidden, but let's face it, a little help goes a long way.

CW thinks the Qld regional city of Charters Towers (130km south-west of Townsville) does a great job at preserving and promoting its goldmining heritage. The centre regularly runs public showings of its Ghosts after Dark film from the Towers Hill Amphitheatre, which explains the history of one of its former mining sites.

The Charters Towers Regional Council has a well crafted audio drive tour, which lets you enjoy the local region at your own pace. Our sample - one 31 tracks on the CD - talks about the township's State Heritage Listed Venus Stamp Battery which is the oldest surviving gold battery in Qld. Another highlight of the audio tour includes the Magnetic Hut in the Towers Hill laboratory - one of the few places in Australia where magnetic north is measured. 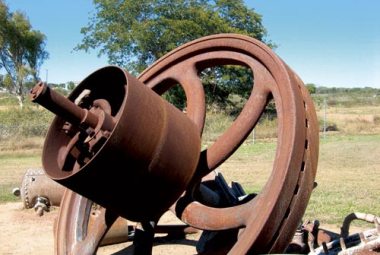 According to Tony, the regional council goes to great lengths to retain its mining heritage, maintaining and protecting many of its original buildings built in the late 1800s, following the discovery of gold in 1871.

"The council won't let you change the facades on the buildings at all," Tony says, "and the weir is something quite special, it's on the Burdekin River. I used to catch black bream there."