The highway wound its serpentine way towards the Gunlom Falls turn-off, up hills that overlooked green but dry country. The prehistoric landscape, peppered with termite mounds, unfurled as we climbed higher, the bitumen finally ferrying us into Kakadu.

Road-weary travellers might rejoice at the prospect of being so close to Gunlom, which is the first destination along the Kakadu Highway. After all, it’s only 6km from the park’s southern entrance to the Gunlom turn-off. But, like most places worth visiting in Kakadu, the turn-off marks the beginning of terrain that’ll make you work for the paradise promised at the end.

I’ve never been one to turn back, often to my detriment. But the red track to Gunlom had Stacey quickly cursing my stubborn side. The washboard corrugations shook the Pajero until it seemed the dash would break apart. The fillings in my teeth hung on for dear life. Most importantly, though, what was the track doing to the caravan? A quick inspection revealed it to be holding up nicely. 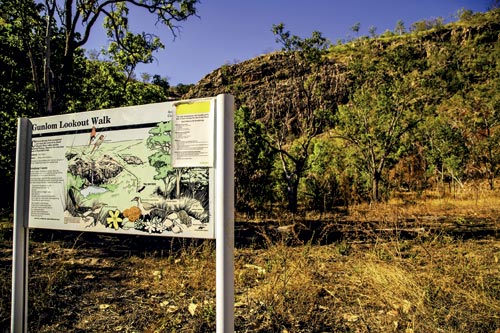 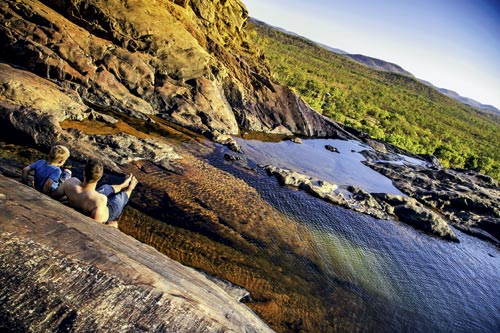 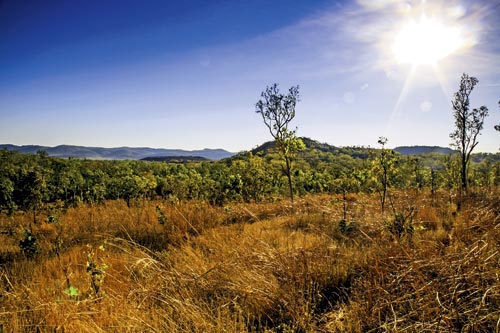 Dropping the pressure in the tyres helped smooth the ride but, because we were towing, any speed above a brisk walk felt downright unsafe. In the rare, relatively smooth stretches, I dared push it to 60km/h, only to quickly regret the iced coffee I’d drunk half an hour earlier.

After bouncing in our seats for 37km or so, we arrived at the Gunlom campground – a dustbowl in the Dry. We drove 4000km for this? I thought. Where’s the wild utopia guaranteed by Tourism NT?

Not far away, as it turned out. For now, though, we were tired. The sun was setting behind the gorge, casting the sky in a pink film. Dingoes howled from somewhere in the scrub, a haunting sound.

We settled the Coromal in the generators-allowed section of the campground, choosing our site at random. Each was as good as the next in those parts. Besides, ours was the only caravan around. Which seemed strange. Were caravans allowed here? Or was the track of horror designed to keep them out? The answer came the next morning when I awoke to find an offroader and a blacktop tourer, each as dusty as the Coromal, in our vicinity.

“How’d your van cope with the road in?” I asked the bearded bloke who owned the blacktop tourer.

“No worries,” he replied. “It only popped a light fitting.”

Having popped my fair share of those before, I enquired no further. Besides, with the kids fed – Weetbix drowned in UHT milk – it was time to explore.

To one side of the campground, a short trail led to a crystalline stretch of the South Alligator River, a waterway fed by the Van Diemen Gulf that wends its way, capillary-like, to the bottom of Kakadu. Small fish darted about and a croc trap lay blessedly empty. It was a reminder that beneath all the beauty we had yet to see lurked many sharp teeth.

“Not too close to the water, Ethan,” I said. It was a phrase I’d repeat to my five-year-old many times throughout the trip.

On the other side of the campground was the clearly marked entrance to the Murrill Billabong Walk – a 1km return hike along a well-stomped trail. It’s an easy walk for people of reasonable fitness but, because of the Dry, the billabong had receded from the path and was obscured behind ghost gums, river pandanus and freshwater mangroves. The trail continued, however, to another, wider, stretch of the South Alligator River. This is a 2.5km return walk in little shade – sunscreen, a hat and a bottle of water or two are essential. And there’s no picnic table or any other facility at the end of the walk, so be prepared to rest on a log or your laurels before hiking back.

“Where to now?” Stacey asked when we returned, her face flushed from carrying one-year-old Jasmine in a special backpack. My own face felt hot, too. The sun was climbing higher, beaming directly into the campground.

“We need to cool off. Where’s that plunge pool?” I asked. I’d seen signs alluding to an oasis at the base of a waterfall and wanted to find it quickly.

A short walk to the Gunlom day-use area, a place for people to park their cars after leaving their vans elsewhere, demystified the situation. A sign pointed to a 100m walk along a metal footpath set among thick, tropical vegetation.

As we rounded a corner, a grey, almost black, cliff face emerged, water trickling from the top into a clear freshwater pool below. The gleaming water was surrounded by lush greenery. It was the kind of sight reserved for postcards and Saturday afternoon travel shows.

With its beach entry, the Gunlom plunge pool is particularly child-friendly. There’s a wide, long, shallow section of water where the sandy bottom is visible. Should any brown logs start moving, you’ll (hopefully) see them in time to get out. We judged it safe for a dip, allowing the kids a splash next to the shore. Braver swimmers frolicked in the deeper water. One even made it to the waterfall, moving through the water in long, lazy strokes. Atop the cliff, people peered below.

Jasmine was getting cranky, in need of a nap, so Stacey returned to the van with her while Ethan and I tackled the Gunlom Lookout Walk.

“Are you sure, Ethan? You’ll have to hold my hand the entire way, okay?” I said.

“Don’t worry, I’m the best bush walker, even better than you!” was his enthusiastic reply.

The climb took about 20 minutes. At times it was a bit steep but with plenty of footholds and rocks on which to rest on the way up, we found the walk very achievable. Ethan’s bold claim concerning his bush walking prowess proved true. The kid could climb, I’ll give him that.

The trail led to a rocky plateau that provided a sweeping view of the Buladjang country, traditionally owned by the Jawoyn people, who believe Bula, a creation ancestor, was one of those responsible for creating the Buladjang. Bula, so the story goes, lives underground and, if disturbed, can cause terrible destruction.

A short walk further brought us to Waterfall Creek at the top of the cliff. A series of rockpools cascaded from one to the other. While others ventured right to the edge, my crippling fear of heights and the fact I had my boy along, confined us to a rockpool 50m away. Regardless, it was heaven on a very big stick.

Day was giving way to night when we reached the bottom. Jasmine was fresh from her nap and playing in the dirt, and Ethan began boasting to Mummy about his bush walking skills. But the dingoes were howling again. It was time to go inside.

The next morning, we hitched up. I was allowing around an hour and a half to travel the 37km track, vowing to keep it at or below 20km/h.

“Say goodbye to Gunlom,” I said to Ethan as we drove past the day-use area.