Mount Warning is a long extinct volcano – some 23 million years old – that stands guard over the Eastern Seaboard between Byron Bay and the Gold Coast, the jewel in the crown of the lush coastal hinterland that defines this region. At 1156m tall, it towers above the next highest peak like a flagrant overachiever, a fact Captain James Cook found rather useful for maritime navigation when he named the mountain back in 1770 for its utility as a landmark by which to assess the location of hazardous reefs. 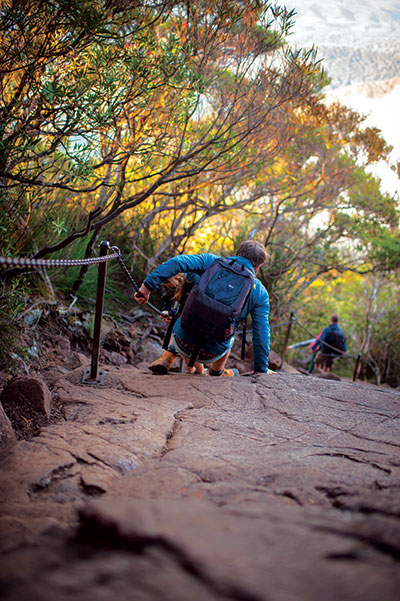 To the local Bundjalung people, however, Mount Warning is known as Wollumbin, meaning ‘cloud catcher’. A fitting title for a kilometre-high behemoth, although we were hoping it did not live up to that namesake today, with our fingers crossed for clear skies. The mountain is regarded as a place of great spiritual significance to the Bundjalung, a sacred site where initiation rites and ceremonies have been performed for millennia.

It certainly holds a particular reverence in the landscape, seemingly visible from every road, backyard and cattle-strewn paddock from the Gold Coast and Byron Bay to Nimbin and beyond. In the days leading up to the hike we had eyed the sheer, bulbous mass of rock atop the mountain with foreboding; were we seriously going to get all the way to the top of that? It remained to be seen.

Once we’d regrouped I flicked my torch back on and trudged onwards and ever upwards, step after step after step, falling into a meditative state in which at least the pain of the climb had plateaued. But that went out the window when it came to the final 400m, which involved hauling our sorry, pre-breakfast backsides up the aforementioned rocky peak of Wollumbin, which is placed like a cherry atop the mountain as though by the hand of some sinister giant with a disdain for hikers. Thankfully the process is aided by a support chain, but it’s not for the faint hearted; there were grunts and groans aplenty from our mob and even in early summer the chain was freezing cold. In winter, take gloves.

Finally, I emerged victorious at the viewing platform at the mountain’s peak, where I promptly collapsed on a bench and quietly congratulated myself as I absentmindedly drank the remainder of photographer Jack’s water (sorry mate). The sky was blessedly clear and the first glow of dawn glittered on the horizon and bled across the eastern sky, where only the most radiant of the stars were still hanging on. The lights of the Gold Coast and Byron Bay twinkled knowingly on the coast, despite the fact most of their residents were still tucked away in bed at this ungodly hour of 5.30am.

The Tweed River snaked its way sleepily towards the sea like some mythical creature reluctantly slinking into morning, a blanket of fog hanging over the valley through which it weaved hundreds of metres below us. The early dawn light captured every particle of the sea mist that lingered over the ocean, a palate of gold, pink and inky blue in which it was almost impossible to discern ocean from sky from land. I stood mesmerised for a long while trying to do so before finally accepting this surreal vision for what it was: impossibly beautiful.

But it was at the northern viewing platform that I found myself most charmed. I wandered there out of curiosity, expecting I would quickly give it up in preference for the sunrise from the eastern side. I was wrong. From here, the mountain slopes away more gently and a thick carpet of rainforest covers the contours of its foothills and beyond to Lamington National Park in the north and the Border Ranges in the west.

What can only be described as a wall of sound rose up to meet me, an absolute cacophony of bird calls as the avian world awoke to another busy day of flitting and fluttering across hundreds of acres of dense tropical rainforest.

I stood so high above the forest floor that I was unable to hear specific birdcalls, rather experienced a deafening choral thrum that vibrated through me like some kind of wonderfully alternate shock therapy.

As I trudged up the mountain in the dark I knew I was in for an epic sunrise, but I hadn’t counted on this. It was absolutely the highlight of my day, if not my week.

The horizon eventually gave birth to the sun and we welcomed its light on our faces wholeheartedly; it was mighty cold atop this mountain, even in November. In the winter months, we’d have been the first people on mainland Australia to feel the warmth of the morning sun. In summer, however, that accolade goes to Cape Howe on the Far South Coast of NSW. We only found this out upon reading the sign at the top, and I’d be lying if I said we didn’t feel a bit pipped at the post.

After about a gazillion clicks of camera shutters – with three photographers and three videographers amongst us, this was possibly the most well documented climb in the history of Mount Warning – the Cloud Catcher began to show us what it was made of, hooking a big one as the landscape disappeared in a thick, dreamy fog. After a few suggestions that perhaps a flying fox would be a good way to descend, or maybe a Sherpa Uber, it was time to go.

The beauty of setting out on a there-and-back hike in the dark is that, once the day finally rises to meet you, you see the landscape afresh for the first time, like a hatchling staring wide-eyed at the world.

Turns out we’d been trudging through some pretty spectacular scenes: from the wispy alpine scrub at the summit, to bushland dominated by towering gums, and finally to the thick rainforest at the mountain’s base, a moss-covered wonderland of ferns, strangler figs and elk horns, where plants grow upon plants, upon plants. The descent therefore became an equally beautiful part of the walk – albeit mighty tough on the knees – offering incredible views across the surrounding countryside as the track weaved around the Cloud Catcher.

By 8.30am we were settled into a cafe in Uki, feeling as though it was surely midday at least. I cupped my hard-earned double latte sleepily, letting that specific brand of satisfaction wash over me: the kind that only comes when you force yourself to do something ridiculous like get up in the middle of the night after an eight-day magazine shoot to climb a mountain. It was nothing that an afternoon nap wouldn’t fix, but for now, coffee.