Nth Qld van parks have reported excellent earnings for the 2009 winter season. In fact, some parks managers have described it as a “record year”.

Debbie Dew, manager of Andergrove Van Park in Mackay still had her powered sites full when we checked on October 15.

Chris Curnuck, owner/manager of Mission Beach Hideaway Village also told CW it had a record year. Chris said it started slowly in June, but sales picked up and the park was full in August, with many powered sites still occupied in October. 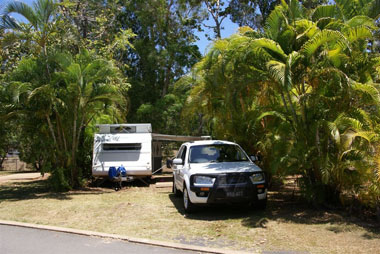 At Flying Fish Point near Innisfail, Andre Nurzenski told a similar story. His figures for the winter were up by 20 per cent, showing just how popular his park has become. Andre is particularly proud of his magnificent orchids which were in flower when we called. Andre is attaching them to some of his large trees in the park for all his guests to enjoy.

Further north in Mareeba, Walkamin Central Van Park (phone [07] 4093 3990) still had around 20 vans there when we called late in October, and the owners told us yet again of a record season.

Pinnacle Village Holiday Park at Wonga Beach in the Daintree area also had a great winter season, but unfortunately its season only lasts around three months.

Obviously the message for travellers next winter is to book ahead to be sure of a site, or travel in the shoulder or off peak season, when you may have less people to share the park and area with, and in some cases, cheaper rates.