As I navigated my Horizon Banksia around another corner in the Ballina hinterland of New South Wales, I reflected on the fact that driving large van-based conversions was definitely in the enjoyment category.

Often, the vans have the same size engine as their larger coach-built cousins but they carry much less weight. That makes them more responsive to the right foot and they often have better handling characteristics.

I realise this is not everyone's prime consideration when choosing a motorhome, but I like driving, and anyone who is going to spend more than a few hours on the road should definitely keep it in mind. 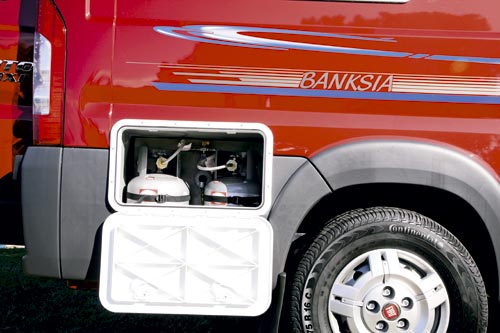 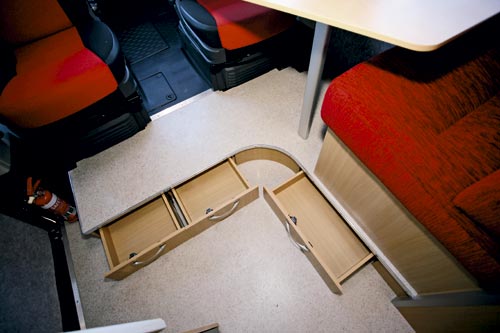 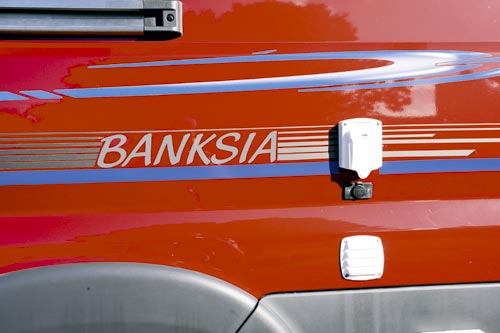 Horizon's Banksia has a Fiat Ducato as its base vehicle and while most Ducato motorhomes come with the 3L, 132kW turbodiesel, Horizon proprietor Clayton Kearney decided to try out the smaller 2.3L, 109kW engine to see how it was received.

When I heard this, I too was keen to see how the smaller motor performed, especially in tandem with the six-speed automated manual gearbox. Quite well, it turned out. European vehicle manufacturers seem to have their turbodiesel technology well and truly sorted, even with all the emission requirements. Although not quite as quick underfoot as the larger engine, the 2.3L motor was certainly willing enough. It didn't affect the AMT gearbox too much - it had the usual hesitation at low revs but was otherwise a relatively smooth performer. If your driving style is a little cruisier than mine, then the 2.3L engine should certainly deliver the goods and the tyres fitted are designed for non-commercial driving so the ride quality is going to be better.

One of the attractions of the Horizon Banksia is its metallic 'profondo red' (burgundy) colour. I should point out that the colour is optional, but it's certainly one I'd be considering. Another metallic colour that seems to be exclusive to Horizon is 'burnt orange', which is certainly an eye-catcher.

Horizon buys its vans without windows and fits the Seitz variety all around, including to the sliding door and directly behind the sliding door. I like this arrangement because it improves the natural light in the middle of the van. But the window can be easily damaged by opening the sliding door too quickly.

The exterior of the motorhome has the usual items such as gas cylinder bin, Dometic cassette toilet door, Truma hot water heater and a colour-coordinated awning. The awning being colour-coordinated might sound like an extra expense but it reduces the profile of the awning considerably.

There is no external bin but opening the rear doors of the van provides access to the substantial under-bed storage area in the rear. Part of this is taken up by the hot water heater on the nearside and the gas bin on the offside. The only problem with this arrangement is that there really isn't anywhere to store dripping hoses, so a plastic bin of some sort is definitely required.

In van-based conversions, internal space restrictions means there is only a limited number of practical layouts that can be used. The Banksia's is one of the more popular ones, with a bed across the rear, nearside kitchen, mid-offside bathroom and a front lounge/dining area which incorporates the Ducato factory-fitted swivelling cab seats.

Air-conditioning is optional in the Banksia - according to Clayton, quite a few of his customers don't want an air-conditioner because they often camp, without 240V mains power, and a roof-mounted unit just adds extra weight.

Across the rear, the east-west bed measures 1.8x1.30m (6ft x 4ft 3in) and comes with an optional innerspring mattress. Taller people will have to look at a north-south alternative like a Horizon Melaleuca or Grevillea.

There is good crossflow ventilation in the Banksia, as well as plenty of storage. In addition to the under-bed space which is also accessible from the inside, there are overhead lockers all around and LED reading lights fitted to both sides of the bed.

Large van conversions usually have relatively compact bathrooms and the Banksia is true to form with a variable-height shower hose, corner washbasin, small wall mirror and Dometic cassette toilet. Until recently, Dometic marketed a vacuum flush toilet but that has now been replaced with a standard cassette with Dometic's SOG system, which has a vapour extraction unit with a vent on the cassette door.

Between the bathroom and the bed in the rear, a full-height, two-door cupboard offers hanging space above and open storage below.

The kitchen, which is fitted with a three-burner cooktop, stainless steel sink with drainer, a 136L fridge and a Sharp Carousel microwave, will handle more than basic catering.

Kitchen storage space is quite generous with five good-sized drawers and working space isn't too bad, either, with a nominal amount plus a hinged extension at the front. There are no overhead lockers but they would crowd the space anyway. Instead, the wall is used very effectively as a switch and gauge panel, a pelmet storage shelf and a mounting point for a flatscreen TV.

Horizon has fully utilised the swivelling cab seats, with the driver's seat meshing well with the table and dinette seat directly behind. A set-up like this is always going to be a bit fiddly to use effectively but it's a very good compromise, especially as the table can be moved back and forth along a wall-mounted metal rail. Both 240V and 12V sockets have been wall-mounted under the table and a false floor has been built around the cab seats and the dinette. This means shorter people won't have to dangle their legs when sitting in the cab seats, and additional storage is created with three drawers in the false floor.

One of the issues with large van conversions is that both the sliding and rear doors offer plenty of ways for insects to get in but a good cure for that is the optional side and rear door screens that were fitted to our review Banksia. They are attached by Velcro around the van's door frames and having zippered doors for easy access.

There's no doubt Horizon has worked on a continuous improvement program over the last few years. And while it hasn't brought out any radically new models, quite a few small and not-so-small refinements have been introduced. For a single person or a couple, who are not particularly tall, the Horizon Banksia has much to offer. It has all of the basic features needed in a motorhome, in a relatively small package that's easy to drive and manoeuvre.