Life Of A Park Ranger

Cristina Vicente (34) is a woman of passion who loves what she does as a ranger at the Adelaide Dolphin Sanctuary. “Since I was a kid I knew I wanted to work in conservation,” says Cristina with a smile. After finishing a Master’s Degree in environmental science, she travelled through Mexico and Australia where she worked with marine turtles – her ultimate favourite.

When she joined the Department of Environment, Water and Natural Resources (DEWNR) in South Australia six years ago, she learned about the Adelaide Dolphin Sanctuary (ADS) and knew she wanted to work there. “I fell in love with the ADS so when a position came up, I took my chance,” says Cristina. “It’s like a dream coming true, working with these beautiful marine mammals in their natural environment.”

The ADS is a little-known marine sanctuary north of Adelaide that’s home to a population of wild dolphins. Established in June 2005, the 118 square kilometre sanctuary protects the resident population of Indo-Pacific bottlenose dolphins in the Port River and Barker Inlet area and also the habitat in which they live. “It’s such an opportunity to have around 40 dolphins making their home right next to a major city. In most countries you’d have to travel to remote areas to witness the amazing social behaviours I get to see almost every day,” Cristina explains. 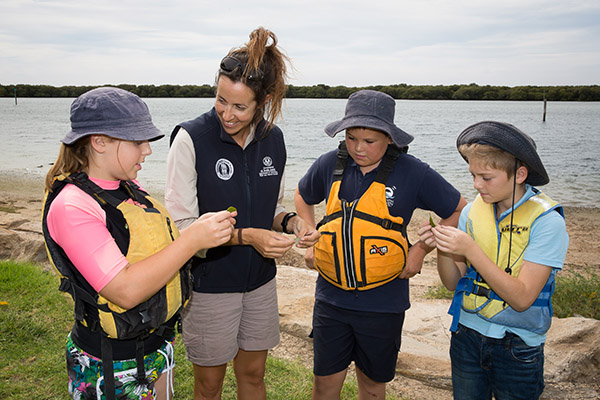 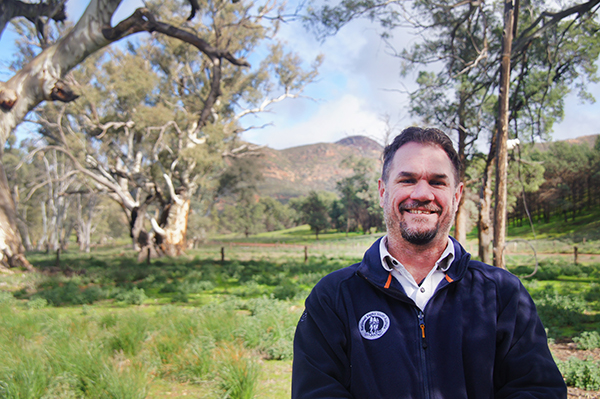 So what does her work entail? “No two days are the same and you have to be prepared to do anything. Some days I start out in the office but then I’ll receive a call about a dolphin being in trouble, so I’ll head out on the boat on a rescue mission.”

Because the sanctuary is part of a busy port with more than 2600 commercial ship movements every year, the dolphins face dangers of different kinds. Entanglements, vessel strikes, marine debris, disease, pollution, harassment and illegal feedings can all negatively impact these fragile marine mammals. “Emergency rescues and animal protection always get top priority. It might be quiet for months but then I’ll hear about an animal in danger and we’ll drop everything.”

The regular part of her job includes monitoring the dolphin population and photo-identifying the different animals. “There’s never a boring moment,” Cristina comments.

Cristina works in a team of three plus a host of volunteers who give their time to the conservation of these amazing animals. Part of her weekly schedule is dedicated to community engagement. “We run a program at one of the local schools, ‘Junior Dolphin Ranger,’ to teach the kids about the bottlenose dolphins and how they can help protect them. We also give talks at local sailing clubs, rowing clubs and commercial tour operators.”

Passionate about involving as many people as possible with the well-being and safety of the dolphins, Cristina set out to organise Dolphin Day. “It involved so much preparation and I really didn’t think too many locals would come, but in the end 6,000 people attended.” It was such a success, the event is now run every two years.

Asked if there are any other highlights, without hesitating Cristina replies, “Seeing the calves when they are one or two days old is simply amazing. Watching the dolphins in the wild, without any interference, is an absolute privilege.”

As our conversation draws to an end, I ask Cristina for one word of advice she’d like to share. “The Adelaide Dolphin Sanctuary is a hidden gem of South Australia and I feel proud to work here. We are so privileged to have these dolphins in the wild and it’s up to us to keep them wild and healthy.”

Starting out in protected area management as a seasonal fire fighter who exited from helicopters into fire fighting situations, Alan Harbour is more than familiar with challenging work situations. “I’ve been the Ranger-in-Charge at Ikara-Flinders Ranges NP for a year and my head is still spinning with the amount of info I need to cram in,” says Alan.

He’s no stranger to park management as his career has taken him from the Grampians NP in Victoria to Kosciuszko NP and Paroo-Darling NP in New South Wales, from the World Heritage-listed Kakadu NP and Uluru-Kata Tjuta NP to Watarrka NP in the Northern Territory.

His wealth of experience serves him well as the Ranger-in-Charge of the Northern Flinders district, which covers the iconic Ikara-Flinders Ranges NP, the Vulkathunha-Gammon Ranges NP, Ediacara CP and the two salt lakes, Frome and Torrens. Alan comments, “How lucky am I to work in such amazing landscapes? The geology of the ranges, the fossils, red sand and contrasting white of the salt lakes – it’s all brilliant.”

So what does a normal day on the job look like? “It entails too much desk time for my liking but that comes with the territory. I’m in such a privileged position to work with the Traditional Owners - the Adnyamathanha people - on a daily basis, as well as other stakeholders and my eight district staff. All these people make for an enjoyable, rewarding day for me.”

Conservation is also an important part of his role, as many native species are endangered and on the brink of extinction. The Bounceback Program began in the early 1990s to help restore the natural ecology of the Ikara-Flinders Ranges. “The reintroduction of two of the ranges’ original mammal species, the western quoll and the brushtail possum, is a fantastic project for the department to be driving as part of our Bounceback Program, and I’m fortunate enough to be part of that.”

For the first time in more than 130 years, there is now a growing population of western quoll in this area and 79 brushtail possums were released earlier this year. The program has also resulted in the successful recovery of the population of the once-threatened yellow-footed rock wallaby.

Ikara-Flinders Ranges NP became a co-managed park in 2011, resulting in the active involvement of the Adnyamathanha people in the control and management of their traditional lands. “The Department of Environment, Water and Natural Resources is in the process of filling a vacant position at Vulkathunha-Gammon Ranges National Park with an Adnyamathanha community member. This will be an ongoing position, and will give an Adnyamathanha person a great opportunity to work on Country.”

As far as Alan is concerned, he’ll spend the rest of his career in the northern Flinders. “I look forward to implementing a new Interps strategy for the park with more input from the Traditional Owners. We have plans for Arkaroo Rock and Sacred Canyon which have immense cultural value as these sites contain Aboriginal rock paintings. We will be developing the infrastructure and upgrading the facilities in cooperation with the local people. My goal is to train a young person from the Adnyamathanha people to eventually take over my job.”

The park is one of the most iconic in South Australia, drawing thousands of visitors every year, thanks to its stunning scenery and fascinating history. Alan comments, “Ikara-Flinders Ranges NP has significant natural and cultural values and we need to make sure these are managed appropriately. I always tell people to be prepared for a longer stay because there’s so much to see. It’s so important to take the time to stop, feel and listen to the country.”