Long gone are the days when caravans were (relatively) simple outfits with little more than a fridge and a stove – and few extras. Today’s RVs are often fitted with more features and appliances than a young couple’s first home, and each of these devices needs to be powered.

Most modern RVs have one or two electrical power systems. A 240V alternating current (AC) mains supply is used for items like powerpoints, refrigerators, microwaves, battery chargers, air-conditioners and water heaters, most of which have a fairly heavy current draw which necessitates the preferred 240V. 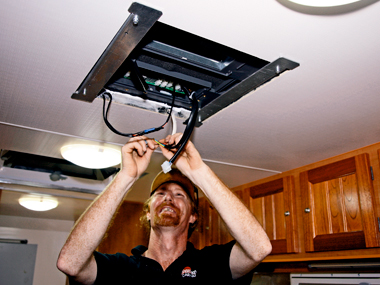 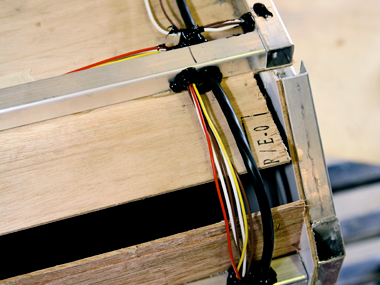 In addition to the mains supply, 12V direct current (DC) is used for a number of other items, such as lighting, refrigerators, water pumps and fans, as well as the sockets for other electrical items like TVs and battery chargers. In some cases, particularly where trucks are involved, 24V DC is used.

With all of that to take in, it’s no surprise that power supply cabling, once quite a simple thing, can be quite complex, especially when generators and solar panels are added. In addition to the potential complexity, there are a number of safety features, particularly with 240V.

By and large, a caravan’s electrical cabling is installed at the manufacturing stage, and if everything goes well, is not seen or heard of again. The cabling is usually run through the walls and/or roof of an RV, but is sometimes placed under the floor or through purpose-built cavities or ducts, which are usually hidden in cupboards or overhead lockers and offer the best chance of after-market repairs.

All RV 240V work in Australia is governed by Australian/New Zealand Standard for Wiring Rules 3000 and 3001, which are applicable to “transportable vehicles and structures”.

The electrics must only be worked on and certified by a licensed electrician. However, that does not apply to 12V circuits, which have no particular standards or licence requirements.

All associated fittings, powerpoints, circuit breakers, switchboards, etc., are governed by specific standards, especially those fitted outside the van. Locations such as bathrooms also face certain restrictions regarding the positioning of powerpoints.

Generally speaking, a caravan is wired in a similar fashion to a normal house, except for one crucial difference: an RV is connected to mains supply via a 15A flexible power cord, rather than fixed wiring, and can essentially be viewed as a very large appliance. That does mean, however, the kettle, toaster, air-conditioner and water heater should not all be used at the same time, lest they trip the circuit breaker.

It might seem an obvious statement, but a normal domestic house is safely stationary, whereas an RV’s movement and associated vibration can have a detrimental effect on cable installations. Because electrical shorts are the key cause for concern, and there is little risk of electrical shock, 12V cabling is single insulated.

A more critical factor is using the correct cable gauge, thus ensuring the cross-sectional area (CSA) of the electrical conductor is large enough to cope with the anticipated load. A 12V fridge, for instance, has a considerably larger current draw than an LED light. An inadequate CSA can result in not only conductors heating up, but also excessive voltage drop – a real problem with compressor fridges.

Cabling for 240V, on the other hand, should be double insulated when used in RVs. There are normally two types of 240V cables used: thermoplastic sheathed (TPS) building cable, easily recognised by the red, green/yellow and black insulated conductors inside a white sheath; or insulated electrical cord, which is the same as what is used for hooking up the RV to mains supply, and is less prone to brittleness fractures.

So how does an RV manufacturer connect up the various 240V and 12V systems? To get an idea of how it all comes together, I talked to several manufacturers and paid a visit to the Sunland Caravans factory in Brisbane to have a chat with proprietor Roy Wyss, who told me there are several challenges facing manufacturers.

In addition to the expected and ever-present movement and vibration of RVs, there is also the risk of insulation penetration by screws and staples when cabling is run through walls. It is for this reason Sunland runs as much cabling as possible through the roof of the caravan, and also runs 240V and 12V cabling separately wherever possible. And since Sunland vans all have aluminium frames, cable apertures are grommetted to minimise the risk of a ‘live’ frame.

In order to cope with a van’s inherent movement problem, all 240V cabling is glued in position and bullet connectors are used, instead of soldering.

Circuit breakers are used on all 240V circuits, as close as possible to the external connecting socket to minimise potential connecting-cable problems.

It may not be obvious to the eye from the outside, but all RV powerpoints are legally required to be double pole, which means they are switched on both the active and neutral connections. This is in case the polarities in the electrical cord supplying the RV have been reversed.

In the 12V circuitry, all cabling should be routed back to a fuse or overload panel. This is designed to not only ensure the circuits are fully protected, but so a problem can be readily identified in the event of a fault.

Over the years electrical supply authorities have developed a considerable number of regulations designed to minimise electrical fatalities, and much of the onus on electrical safety lies with RV manufacturers getting it right in the first place.

However, there is one key feature that lies in the hands of you, the user. Sadly, electrical accidents happen all too often, and one of the main killers is the (seemingly) humble electrical cord – something that is the responsibility of the user, not the manufacturer.

That is one of the reasons the so-called “test and tag” legislation was introduced a few years ago. The risk of electrical shock can be reduced even by untrained people.

It involves little more than always being careful using electrical cords and conducting a simple physical inspection for insulation damage and exposed conductors each time the cord is rolled up.

It may be a cliché, but electricity should always be our servant, not our master.