Travel: How to do Australia with Two Pre-schoolers

IT'S NOT AN original idea, and we are definitely not the first, or last, to embark on such a trip. In fact it was never an idea to begin with. A trip around Australia has always been part of my husband Rob’s life plan: get married, buy a house, have kids, then travel around Australia – kids in tow. I’m sure it was embedded in the fine print of our marriage vows somewhere.

At the age of four, Rob had travelled with his parents and sister on a trip around Australia. The memories and photos of that time had always made him want to do the same trip again one day. So, exactly 30 years later, Rob is once again doing the trip. Like his parents, we are driving a trusty Land Rover towing a camper trailer, and our two children Jack (five) and Alyssa (two) are of a similar age. 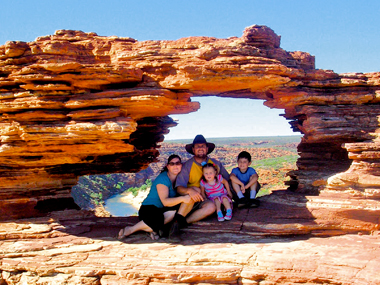 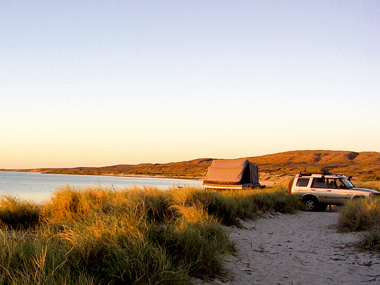 Planning and saving started in earnest around four years ago, with the purchase of all the necessary equipment: car fridge, compressor, winch, trailer, etc. We cashed in our long service leave, saved every bonus that Mr Howard and Mr Rudd threw our way (technically we are spending the Stimulus all around Australia), as well as regular savings from our average income – no plasma TVs or luxury items in our household.

We trekked to all the camping and caravan shows but our camper trailer was a lucky find in the Trading Post. We are travelling in our 2000 Land Rover Discovery Td5 with a 2000 model camper trailer designed and made by an unknown engineer (we think it was one of the first scratch models for a camper trailer business). Both have been modified by my carpenter husband, who likes to play mechanic/plumber/metalworker.

We originally intended to do the classic long-service-leave trip and maybe take three to four months. But we soon realised that travelling with young children over long distances was going to be a challenge and the more time we had, the more likely we were to enjoy the trip. We decided to budget for around six months at $1000 a week. I know this sounds like a lot, but honestly, once you start saving for something that is really important, you just seem to find the extra money. As for work, my husband is a contractor with flexibility, and I resigned. A small price for a big dream!

Rob mapped out the budget by estimating kilometres, fuel costs, camping and park costs, food expenses and the odd luxury expense such as entry to wildlife parks and touristy outings. Some weeks we have been under budget and other weeks we have been over. With the odd mechanical expense thrown into the works, our budget has so far been spot on.

We decided to head west from Melbourne across the southern coast of Australia, mainly sticking to the coast and heading in a clockwise direction. I can’t tell you the number of people who have told us that this is the “wrong way”!

We’ve been more than happy with our choice of route. Leaving in April has meant that we’ve had continually warm weather with very little rain, arriving in the north during the dry season – and as for those predicted head winds, we have had none.

It has also been a blessing to have no set roads to travel or places to be within timeframes, as this has provided us with the luxury of not being rushed and letting us choose our adventures along the way. Don’t believe those who tell you that you need to book into places like Broome. We have never had problems finding somewhere to camp. While we certainly won’t see all of Australia, we will definitely get a good taste of its beauty. Some areas like Cape York and Tas will be separate trips for the future.

Travelling with children of any age has pros and cons. For us, travelling with preschoolers has the advantage of not being tied down to home schooling requirements. The kids are generally happy car travellers with the youngest often having her day sleep while we drive. The downside has been the disruption to two-year-old Alyssa’s routine, which has resulted in a couple of beautiful tantrums.

Australia is so much bigger than I ever imagined, the scenery more spectacular, the adventures just continual, and the kids have adapted better than I thought possible. It has also been far more remote in areas than I could ever have anticipated, quality family time less frequent than I had thought, and the laundry is endless with a cost I hadn’t expected (I could have bought a new machine and dryer by now).

All in all, this trip is about living with no regrets and seeing dreams come to fruition. You only get one life and maybe one opportunity: we weren’t waiting to be grey nomads to see this wonderful country. In fact we plan to do more similar trips over the years – including our grey nomad years.