The Land Rover Discovery 4 is a promising tow tug just with its lanky wheelbase, short overhangs and heavy, stable chassis alone. Add its chest-thumping Jaguar-sourced 3.0L V6 twin-turbo diesel engine and it knocks hills into plains. While it is a stable platform with excellent performance, and not too bad at the bowser, either, some won’t like the fact that Land Rover don’t recommend use of a weight distribution hitch. Even when you’re not towing, the Disco is a thoughtfully packaged, roomy 4WD with excellent on- and offroad ability. Around town, though, you notice every centimetre of its girth. 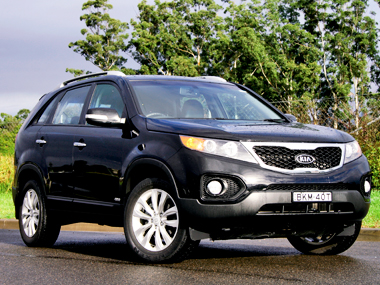 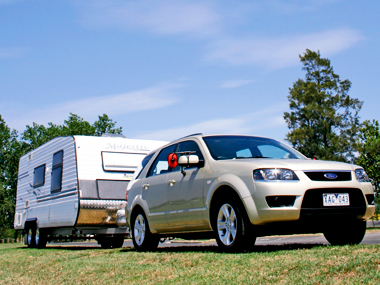 There have been few Australian cars that have got it as right as the Ford Territory. While the design is getting a little dated, its all-round competence and popularity in a fast changing market shows just how well sorted the Territory is. While the SY Mark II update we tested early this year is not a huge departure from the 2004 original, its slight design refresh and minor engine tweaks in the RWD version are worthy improvements. A stable tow vehicle, the Territory provides enough torque for easy cruising. While it isn’t super-economical when towing, without a van it can achieve less than 10L/100km on an easy cruise. The Territory is an affordable, roomy and well executed design that is still the dynamics benchmark in its class. With the introduction of a V6 turbo-diesel in time for a major refresh next year, it promises to be even better again.

Toyota just about owns the copyright for 4WD in Australia, and it’s no surprise that the latest Prado 150 Series is a further refinement of the super-successful nameplate. The top-shelf Prado Kakadu offers lush equipment levels, a cushioned ride and, when towing, a stable load hauler. While the 3.0L TD engine is a little thirsty, it keeps up a steady cruise when towing and is responsive around town without a van behind. The improved safety features and overall refinement over the 120 Series is great, but it’s the leap forward in offroad technology that makes this vehicle most interesting.

Regular CW readers will know we ran a long-term test Sorento for six months in 2008, and were impressed with the strong towing ability and good value rolled into a compact 4WD wagon. The all-new 2010 Sorento has lost weight and added space, power torque and a swag of refinement. Unfortunately, it has also shed 800kg off its towing capacity. So if you’re happy with a van on the lighter side of 2000kg, the Sorento should be on your shopping list for its outstanding engine torque, towing economy, comfortable interior and composed manners on the road.

While the VE Commodore has just changed to its series II update, the MY10 VE Calais V Sportwagon we tested this year, with the new direct-injection 3.6L V6, is no different mechanically. And otherwise, there are only styling tweaks and new features such as larger alloy wheels and a new central info screen. The ultra-smooth, powerful and torquey V6 is wrapped in a stylish, stable and comfortable towing platform. This is the closest Holden has been to challenging the Euro wagons – and beats them hands down as a tow vehicle.