Though it seems like a fairly straightforward endeavour, driving on the thousands of kilometres of dirt roads throughout Australia presents a range of potentially dangerous situations, particularly if you’re towing a camper trailer or caravan.

One of the chief problems of dirt driving is dust. A single car travelling far in front of you can leave a dust trail on a windless day that will hang over the road for an hour. That means you can’t see oncoming traffic, and they can’t see you. Most of the hinterland roads aren’t really two-lane, which means you have to really keep your eyes peeled constantly for dim headlights right in front of you. 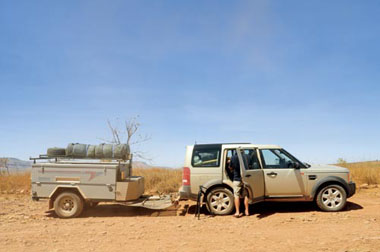 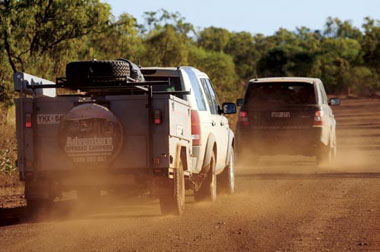 There are a few ways to mitigate the danger of dusty roads, though. You can always pull over and have a cuppa, letting the vehicle in front build up some distance between you. Being in front is another answer, but that usually entails passing, which can be hairy under the best circumstances, and downright frightening with a trailer on a crowned dirt road. Sometimes you can reach the vehicle in front on your UHF radio and let them know you’d like to pass, as they probably can’t see you buried in their dust.

When it comes to oncoming traffic, remember that safety should always come first. A couple of seconds spent pulling over to let a road train pass (they won’t slow down or move for you) is worth your life. Motorbike riders should get your full courtesy as well. These roads are bad enough on four wheels, but expecting a motorbike to pull over is just being rude. It’s also a good idea to slow down to a walking pace to limit your dust cloud for them.

Another problem that outback travellers face is fatigue. It’s one thing to be cruising up the Stuart Highway past endless scrub fields and opal diggings, but on softer ground where a quick swerve can mean barrel-rolling down the road, you can’t take your eyes off the red dirt for an instant.

I’ve driven over 1500km in a single day a few times on bitumen, but on the dirt that kind of mileage would be impossible. You need to keep this in mind when planning trips over dirt tracks – give yourself twice the time you’d need to cover the same distance on a highway.

Then there are corrugations. Either you’ve already endured these endless undulations that threaten to dislocate every joint in your body and seem specially designed to rout and amplify every little squeak and rattle in your vehicle, or you will soon enough if you plan on driving the outback.

Corrugations mean you need to drive even slower than you already were, but not too slow. There’s a magic speed for coursing corrugations that depends on the frequency of the corrugations themselves, which, when achieved, offers a balance between dangerous speed and violent vibration. Usually that’s somewhere around 80km/h, which tends to keep the wheels out of the troughs somewhat.

Lowering your tyre pressure can help considerably when it comes to ride comfort on dirt roads. You don’t need to drop them much, around
20 per cent usually does the trick. If you are not sure, let out 10 per cent first, then push your van or trailer and watch your tyre. If the tyre starts to belly then the tyre is beginning to absorb shock. You don’t want them too high because you will chatter your teeth out of your head on corrugations, but too soft and you’re more likely to slice a sidewall or just destroy the tyre altogether. Lower pressure will help you get through bogged sections easier too, but be careful when letting your pressure out to traverse a sandy section, then speeding back up to cruising speed. Those spongy tyres won’t give you any control at all at speed.

One last concern is your choice of tyre. It’s not a good idea to head out in the real scrub for any period with highway tyres for a number of reasons. Designed to run quiet on the highway, they usually have shallow tread, offering less traction offroad.

They are also not built with real durability in mind. Offroad tyres, light truck or all-terrain tyres all have reinforced sidewalls and more aggressive tread than highway designs. It’s one thing to repair flat tyres, but when you shred a highway tyre into black spaghetti, you’ll be wishing you’d bought some proper tyres.

BFGoodrich, Cooper, Goodyear and Mickey Thompson are among the top manufacturers available for offroaders now. You will pay for the added durability, and you’ll hear them on the highway, but you will also spend less time changing tyres, and more time checking out Australia!