When New Age Caravans moved into the Australian market about six years ago, it created a stir because, although its caravans had similar features to other available models, they looked a quite different in terms of style.

Several pop-tops were included in the New Age range at that time, but they were subsequently dropped in favour of larger, full-height caravans. However, the design evolution wheel has turned and pop-tops are available again, in both 15ft (4.6m) and 16ft (4.9m) models.

For this review, Penrith-based, Sydney RV was kind enough to lend me one of its Wallaby WA15E models. The 15 meaning 15ft, of course, but I am not sure where that length actually comes from, given the external body is 5.2m (17ft 1in) and the internal dimension that’s often used by manufacturers is 4.86m (16ft). 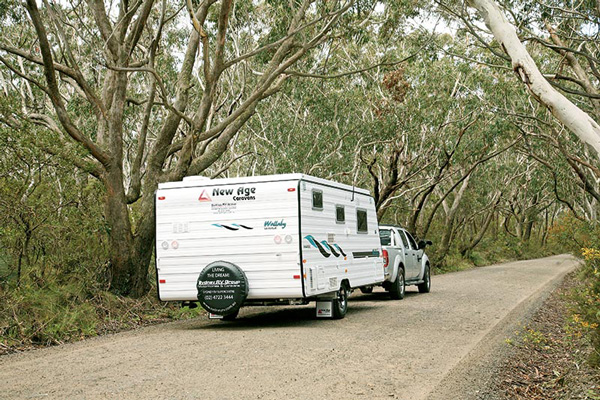 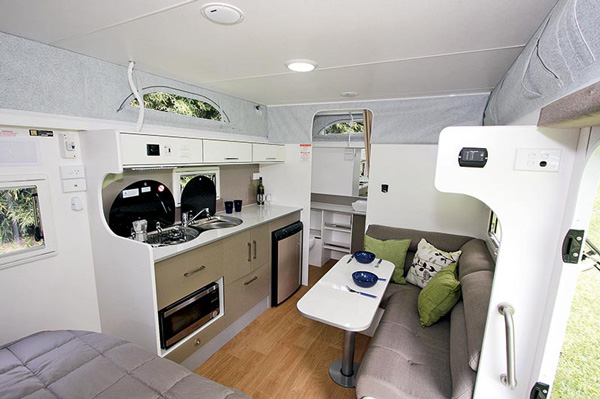 Still, even at 5.2m, the Wallaby is a surprising little package that comes with a number of impressive features. Back in the day, pop-tops were considered to be budget versions of their full-height cousins and few manufacturers gave much thought to fitting them with any sort of bathroom, largely due to difficulties in design. However, time and tide have moved on, and pop-tops with full-width rear bathrooms are now readily available.

Because of the lack of fixed upper walls, pop-top electrics are usually handled differently than in full-height vans, but most of the 240V and 12V fittings in this one seem to be in logical places. One minor exception is the 12V socket on the wall at the front end of the kitchen bench. It’s next to 240V and TV antenna connections as it’s in the ideal place for a bracket-mounted television but, as the outlet is low on the wall, other 12V devices will need a long lead. The 12V fuses (my favourite picking point) are neatly labelled on the battery charger in the tunnel boot but access is a little bit awkward.

Given the bathroom arrangement, you may be surprised to see the Wallaby pop-top has that other ‘essential’ feature of a modern caravan – a front island bed. Compromise is the name of the game here, though, and it means the kitchen bench and dinette were compressed in order to fit in everything else.

Like many caravans, the Wallaby has an extendable island bed. In its shortened form, it measures 1.78x1.52m (5ft 11in x 5ft) and, when extended by the mattress bolster, it lengthens out to 1.88m (6ft 2in). That’s okay on the nearside but on the offside, the mattress is quite close to the kitchen bench. You can squeeze through, but only just. Being a pop-top, the bedhead is pretty much standard, with the side wardrobes and overhead lockers a little shorter to accommodate the reduced wall height. Unlike many vans, there isn’t a nearside window, mostly, I suspect, to avoid contact with the Carefree awning arm, but it does reduce airflow and natural light around the bed a bit.

Under the posture slat bed base, part of the general storage space is taken by the Truma Saphir air-conditioner. Up until a few years ago, rooftop air-conditioners were almost exclusively used in caravans and they never really worked with pop-tops because of their weight. But a unit under the bed, which takes up a bit of space? No problem at all.

In the kitchen, a few little tricks and compromises make the most of the space. The small, 90L fridge fits under the benchtop and using a stainless steel combo three-burner cooktop and sink, both with glass lids, saves space. Having the microwave set low under the cooktop allows for an extra drawer but it is awkward bending over to lift food in and out. Finally, being a pop-top means lower overhead lockers. The end result is some practical benchtop space, as well as a couple of good-sized drawers and a cupboard, but I did wonder if the benefit of moving the microwave to a higher position would more than offset the inconveniences of a smaller, low-set drawer.

On the opposite side to the kitchen, the L-shaped lounge and small table is about the only arrangement that would work reasonably well in this space and give easy access, with room to walk past. Overhead lockers are fitted but they don’t intrude into head space too much.

Across the rear, the bathroom is fairly conventional, with a nearside shower cubicle, offside cassette toilet and mid-wall vanity cabinet. Under the bench is a cupboard and a surprising amount of shelf space. However, access to these areas would be easier, particularly to the shelf next to the loo, if it weren’t for the configuration of the door. I’ve seen roller shutter doors work well in areas like this but I’m not sure how they’d go in a pop-top.

The Wallaby pop-top could be used for a round-Australia trip, but it’s probably more suited to shorter trips and/or weekend excursions due to its limited storage and fridge capacity. But it does come well-equipped for remote stays (except for solar panels) and so could easily be used by those who are happy to travel light, with a van suitable for a smaller vehicle. Not to mention, it’s very nicely priced, too.