In many US rigs, the addition of a nearside door, which is a compliance requirement, often looks exactly like what it is – an add on. But, in this case, A&A Industries and Airstream have done an exceptional job on the installation. The layout has been chosen with the extra door in mind and the external work is so well done it looks like part of the original design. But the awning, which fits the Airstream’s unique shape quite well, is still located on the offside.

In the weights and measures department, the 7.6m (25ft) Airstream has a tare weight of 2720kg and an ATM of 3447kg, which means it has an excellent load capacity of more than 700kg. But that also means the van is no lightweight, especially with its unladen ball weight at 349kg. So a heavy weight tow vehicle is needed to pull it. 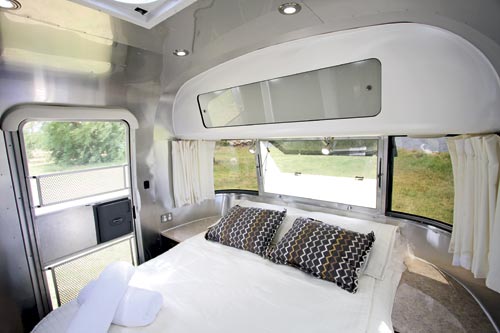 The layout consists of a front bedroom with a split bathroom, rear dining and a kitchen bench that fills most of the offside wall. The nearside wall is taken by a sideways-facing lounge and the fridge. A noticeable feature of this van is the limited overhead locker space. There are lockers across the front and rear of the van, and above the kitchen bench and bathroom cabinet, but not really along the van sides. That's not necessarily a negative, though because it improves the spacious feel around the bedroom and dining area, and there is plenty of storage elsewhere such as the central wardrobe.

The front dining/lounge is designed not only for those who like to stretch out and relax but for any visitors who might come calling, as the dinette can also be folded down for an extra bed.

The kitchen bench has a slight American look about it, but its L-shape with curved extension makes good use of the available space. Fitted into the bench is a two burner cooktop with a Delonghi combination microwave (oven, microwave and grill) below. A round stainless steel sink (without drainer), which can be accessed from either side, sits in the curved extension. Below are two circular doors which give quick access to the shelved area below. Additional storage is available behind the circular cupboard and beside it, the latter being drawers and a large pantry with a fixed shelf and a slide-out.

A real feature of this Airstream caravan is the split bathroom which is butted up against the bedroom and comes with a shower cubicle on the nearside and a toilet cubicle complete with vanity cabinet on the opposite side. Both sides of the bathroom area can be closed off to create privacy between the bathroom and bedroom. Although in a fairly confined space, the vanity has much to offer with a selection of storage compartments, a round wash basin and a large mirror set at an angle between the ceiling and the wall. It's quite an effective arrangement.

Like the dining area in the rear, the north-south bed is surrounded by windows and the nearside door. Bedside cabinets are fitted to either side of the bed and the external shower cubicle wall is used for mounting a flat screen TV.

I'm not usually a fan of all things American but it's not hard to see the attraction, functionality and retro charm of the Airstream. While it’s radically different to the average Australian van, it lacks for nothing in build and comfort with all the modern essentials. Indeed, it comes with a few little items not found in our local products. One thing is for sure, it's certainly going to stand out in the crowd wherever it is and for anyone who wants something a little different, then it's a winner!

The full test appeared in Caravan World #523, February 2014. Subscribe today for the latest caravan reviews and news every month!