THE TEAM AT Southern Cross Caravans, a Brisbane-based caravan and fifth wheeler specialist, has managed to cut itself a very interesting niche in the market with their Expedition design. Suited mostly to tray-style utes, this unit features something quite different to most other fifth wheelers - a front lounge/dining area (in the overhang) and rear bedroom.

As with anything, this interior comes with its positives and negatives. But to anyone who comes from a caravan background it does have a certain appeal, especially since the layout can be fitted into the 7.73m (25ft 4in) length of the fifth wheeler - a considerably shorter towing length than a conventional caravan. When reversing, although a slightly different technique to a caravan, any fifth wheeler can usually be squeezed into tighter parking places.

The Expedition's layout means the underside of the overhang has a relatively low height when compared to front bedroom designs. Consequently, to give the necessary turning clearances a cab chassis tray-style tow vehicle is required, rather than a standard ute. If needed, Southern Cross can manufacture a custom-designed and engineer-certified tray to fit a cab chassis. The company also favours using a ball coupling rather than the skid plate, but that can be fitted if preferred.

My tow vehicle was a Mazda BT50, and its 3L 115kW turbodiesel engine certainly had plenty of grunt for towing the Expedition. A GCM (Gross Combined Mass) of 5500kg and payload of approximately 1300kg allowed adequate towing capacities.


CONSTRUCTION
The Expedition has a fiberglass composite body fitted on a SupaGal chassis.

The team at Southern Cross will tell you that they have tried to strike the right balance between a strong structure and an overweight rig. It's for that reason that they prefer not to use slide-outs, but can design them if required.

The chassis rides on Southern Cross' Easytraveller Gen 2 suspension, a design featuring airbags, trailing arms and shock absorbers. It's built to be self-levelling, with compressed air controls located in a bin above the nearside wheels. All of the wheels are fitted with 12in drum brakes.

With the exception of the abovementioned bin, external storage is located in the overhang. Hatch doors on both sides give access to a right-through tunnel boot, and a bin for two 4kg gas cylinders is in the under-rear wall.

Setting up the Expedition takes minimal time - the remote-controlled electric legs are lowered, and the vehicle is unhitched and driven away. Once the electric steps are lowered and the awning wound out, it's just about ready to go.

Of course, there are a few more duties inside, such as opening the hopper windows, roof hatches and winding up the TV antenna, but the wine and cheese isn't far away.


WIDE OPEN SPACES
Perhaps the most striking feature when you first step through the Expedition's mid-wall door is feeling of spaciousness. This is aided by the relatively open layout, with kitchen and dinette towards the front and bedroom and full-width bathroom to the rear. Light and bright colours, especially the glossy ceiling, and the large windows all-round, also help.

The effect the raised dinette area has on the front is very interesting. Although there are two steps, the kitchen more or less flows into the dinette. Being a club-style lounge, it will seat four people quite comfortably. Although there are windows on either side, the only downside is that you cannot see out the front.

Gourmet chefs will love the Expedition's kitchen, which is one of the largest I have seen. There are benches on either side, as well as bench space, cupboards and overhead lockers. The nearside bench has a full Thetford Caprice stove, while on the other side the stainless steel sink is surrounded by cupboards, drawers, overhead lockers and plenty of bench space. A 240L Vitrifrigo fridge, with Sharp microwave above, adjoins the rear of the offside kitchen bench.

With its head against the nearside wall, the innerspring mattress measures 1.93x1.52m (6ft 4in x 5ft), but can be extended with a bolster by another 160mm (6in). That does, however, mean that it juts out a little more into the walkway, but that is not really a problem.

One of the key benefits of an east-west bed is that there is often room for a larger bedhead. Both of the Expedition's bedside wardrobes and cabinets are well sized and split so there is a good shelf area in between. Additionally, there are two overhead lockers. The bed lifts up to give access to the usual storage area underneath. Large windows on both sides give good cross ventilation.

Like most large, contemporary RVs, this one has a full-width rear bathroom. A shower cubicle fits into the nearside corner, with a Theford cassette toilet opposite. The bathroom is deep enough to accommodate a vanity unit and a generous cupboard across the rear wall. Also included are towel rails and a wall mirror. Like the rest of this fifth wheeler's layout, the bathroom does not feel cramped.

The rig has an extensive electrical system, with LED lights fitted throughout. There is one external and five internal powerpoints, as well as the usual house battery and charger. Most of the electrical controls, including hot water, are located in an overhead locker above the offside kitchen bench. That is also where the AM/FM radio/DVD player and swivel arm-mounted flatscreen TV are located.

Solar panels and specialty items, such as satellite TV, are all optional.


THE BOTTOM LINE
The standout feature in the Southern Cross Expedition is undoubtedly the front dinette/rear bedroom layout. It is quite different to most conventional fifth wheeler designs and makes for a very comfortable rig.

Whether you like that or not depends largely on previous RV experience, but the Expedition certainly offers an open and very user-friendly layout.

This tough unit is designed for exploring a few of the back blocks of Australia in both comfort and ease. It would do the job nicely. 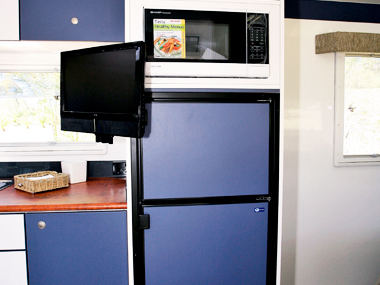 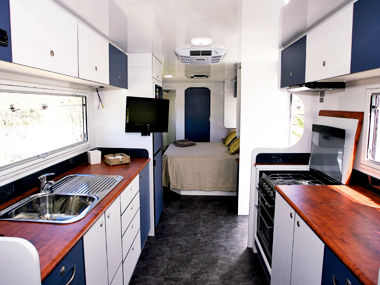