Peninsula Caravans occupies an interesting place in the market in that its products are manufactured in Melbourne, Vic, exclusively for Caravan Centre, in Port Lincoln and Renmark, SA. No-one else sells Peninsula. It's a regional brand.

Apart from any other advantage this strategy might confer, the chief benefit is that it enables Caravan Centre to design and build the type of caravans preferred by its many customers. Although it represents La Vista and Montana, and was recently appointed a dealer for Aussie Wide Caravans, Peninsulas are by far the biggest sellers. 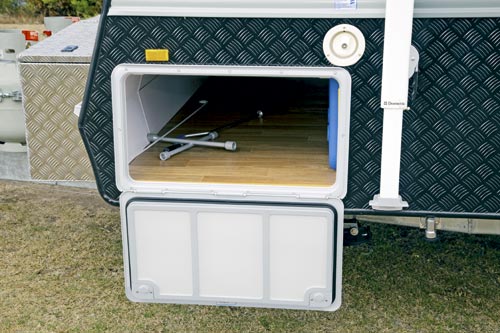 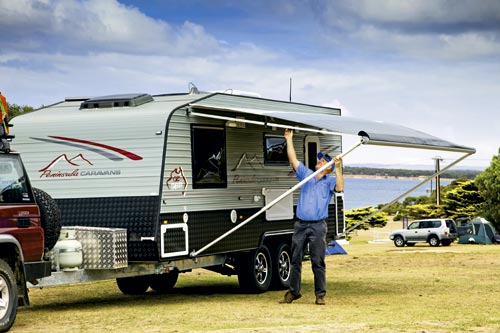 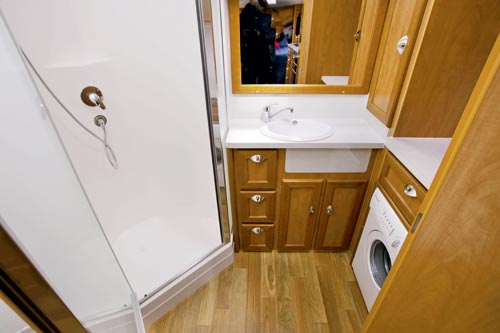 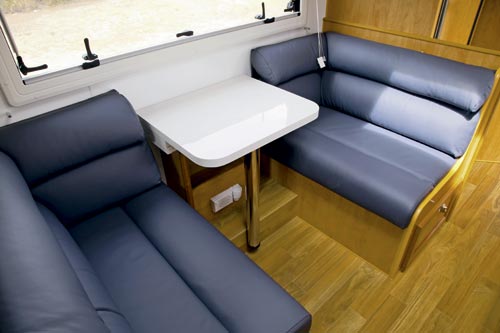 As it happened, our stay in Port Lincoln was made more interesting by rough weather, forcing us to postpone photography more than once. It also made life more exciting for tuna fishermen many kilometres offshore, but that's another story and unrelated to caravans. Windy conditions made sales manager David McKay reluctant to hoist the awning on his brand new Oz Trekka so we waited several days for the wind to abate. We finally got the van to the safe grounds of the Port Lincoln Tourist Park, thanks to managers Peter and Maree Appleton, and there discussed its various accomplishments.

David introduced us to the 21-footer and told us this model includes several refinements which were incorporated after much on-road testing and extended touring. "This is a van designed and built for those who like to be self-sufficient," he said. "Travellers are spending more time free camping these days because of rising costs, so they need a van capable of being independent for extended periods. Hence the tough galvanised chassis, offroad suspension, good power supply and back-up, and a unique ensuite with plenty of room and benchspace."

David believes a caravan needs to be at least 6.4m or 21ft long to be genuinely comfortable, so this one has an external length of 6.55m (21ft 6in). The suspension is Cruisemaster offroad. Leaf-springs and airbags are optional with this manufacturer (Vehicle Components) but, in this instance, the Caravan Centre opted for coil-springs and shock absorbers.

The chassis is full galvanised steel which means slightly more weight, but it's a platform unlikely to rust when you're enjoying extended self-reliance near an ocean. The external colour is a pleasant silver-grey, set off by restrained maroon and white graphics. Checkerplate is used across the lower half of the body as well as on the large front utility boxes.

The appliances are heavy-duty as well. Extended touring has proven time and again that standard three-way fridges are not very efficient in hot climates, so the Trekka instead bears Waeco's heavy-duty 215L RDP215C compressor fridge/freezer. At the other end of the temperature scale, it can be too cold in the desert at night for conventional heaters, so this van has a powerful diesel-powered heater with twin outlets. The unit is automatically controlled, and reputed to use as little as half a litre of diesel per hour, so it's ideal for free camping.

The electrical system is pretty straightforward, but since this van has big expectations when it comes to electricity there's 250W worth of solar panel on the Trekka's roof. A ProStar 30 controller monitors the electrical system. The van carries two AGM deep-cycle batteries and all lights, internal and external, are LEDs. External storage is important as well, with a large tunnel boot and custom alloy gullwing box on the A-frame, plus an enclosed generator compartment.

An Ibis air-conditioning unit is positioned in the kitchen area, as per the usual caravan setup. Natural light is then invited in through two medium-size Dometic skylights - one in the centre of the van and one over the double bed, while a double-glazed Euro window is set over the food preparation area. There is another window in the ensuite, one over the bi-fold table in the lounge area, and large ones on either side of the bed.

It's difficult to see how you'd get more storage space into this kitchen. A mass of cupboards and drawers are provided above and below the benchtop and either side of the Swift oven/cooktop and stainless rangehood.

David mentioned while we were shooting this van that raising the height of the double bed to 50.8cm (20in) - about 15cm higher than you'd expect - enlarged the storage space underneath. There are lockers and cupboards around the bed, two of them vertical robes with mirrors.

Cupboards in the kitchen are Winter Maple laminate and they look swish. Benchtops are full laminate, with splashbacks. Water tank capacity is 285L across three tanks, one of which is filtered and has its own pump for dedicated drinking water.

The ensuite is probably the most unusual feature of the Oz Trekka because it is sealed off from the rest of the van with a large, full-length door. This eliminates the common problem of tracked doors shaking loose on rough roads.

The geometry found in the bathroom is a little different, too. The angled, prefab shower is unusually large and, somehow, the designers managed to fit a 3kg front-loading washing machine into the wall between the vanity and the door. What is currently vacant space above the washing machine could be converted into a full-length cupboard, if desired.

For a rig that boasts self-reliance, Peninsula's Oz Trekka is a definite contender for a good, long bout of remote touring.